From The Blair Witch Project to The Ring to Adult Swim, filmmakers have long been aware of the horrific potential of the VHS tape. Few have used it as subtly but disturbingly as director Keith Gordon did on Better Call Saul this week. Fresh from helping to transform Perfect Strangers star Mark Linn-Baker into a figure of menace on The Leftovers a few weeks back and working from a smart script by Ann Cherkis, Gordon closes out the episode with a look at the frenetic ad for an ad hoc advertising agency, created by an incognito Jimmy McGill to recoup the cost of the commercials he’s now legally forbidden to run. Screening the commercial for Kim, Jimmy presses pause on the VCR right at the end. At the top of the screen is the pseudonym he’s chosen for the project: SAUL GOODMAN. At the bottom, there’s the wavy distortion and static of a freeze-framed videocassette. “That guy has a lot of energy,” Kim deadpans. “It’s just a name,” Jimmy replies. But the screen says it all. That name will alter Jimmy out of recognition, and warp the whole world around him.

The arrival of the Saul Goodman persona, even in this larval stage of development, is the show’s most buzzworthy narrative development. The appearance of Lydia Rodarte-Quayle, the tightly-wrapped cog in an international conglomerate who used her combination of access and anonymity to provide Gus Fring with crucial ingredients in his methamphetamine manufacturing operation, comes in a close second. But even without these key players in Walter White’s lethal future, this episode’s a killer pretty much across the board.

It’s dotted with devastating writing, for starters. Mike Ehrmantraut mostly takes a back seat this week, but his daughter-in-law Stace (Kerry Condon) delivers a tremendously sad and sweet monologue in a grief counseling group they attend together. She’s been telling her young daughter about the pancakes her slain cop father used to make her in the shape of Mickey Mouse, which she can no longer remember. “Now she asks for ‘Daddy pancakes’ every weekend,” Stacey says. If that doesn’t hit you like a punch in the throat, you’re a tougher customer than I am.

Earlier, in the sequence that follows the opening credits, Kim Wexler’s closing statement about Jimmy to the bar association asks the question “Is the legal profession better with Jimmy McGill in it?” We hear these words over a shot of Chuck McGill, crouched in a dark corner of his house, too sick and distraught to answer his ex-wife Rebecca at the door. There’s your answer.

Ironically, Chuck ends the episode doing better than he’s done in ages. After holding a battery in his hand to build up a resistance to electromagnetism, his aversion to which he now knows for sure is psychosomatic, he actually ventures into the garishly lit downtown streets to call his doctor from a payphone. I’ve got no idea where he’s headed with this, whether he’s truly looking for the “new beginnings” he toasts to with his friend Howard Hamlin or whether his quest for revenge against Jimmy will continue. But he’ll be freer of the shackles of his illness wherever he goes. In the meantime, the sequence nails the nightmare sensation of being out late at night among the city lights and wishing you were anywhere but.

That beautifully and bizarrely shot sequence is outdone in pure visual splendor by the glass brick walls of Jimmy and Kim’s office building. They stand in front of it at night to smoke and talk and contemplate the future, while the glowing glass occupies the entire field of vision behind them and the small white moon shines down from above. Kim and Jimmy’s relationship is such an odd one: It’s not as if they’re depicted as having white-hot romantic chemistry or anything, it’s just that they happen to prefer each other’s company to anyone else’s. Kim resting her bare feet on Jimmy as they drink champagne from coffee mugs to celebrate his suspension (as opposed to disbarment) conveys that. So do those glass bricks, and the way they stand in front of them to chat, at ease with each other even as this overwhelming wall of luminosity provides a deeply unnatural setting for their natural rapport.

But the most compelling aspect of the episode involves a character who’s now pretty far afield from our leading players. After last week’s courtroom theatrics with Chuck and Jimmy and the full-on Breaking Bad prologue we’ve been getting from Mike and Gus, it’s a gutsy move to pull back to Nacho Varga, Salamanca family lieutenant. After all, he’s the only major figure on the drug-trade end of the story we know doesn’t make it into Walter White’s orbit. Paradoxically, his uncertain fate somehow makes his story less engaging, not more, since your brain can’t help but tell you he somehow doesn’t count.

But actor Michael Mando has always made more of this character than meets the eye, largely through the use of his own. This guy has eyes you can read like a newspaper, conveying anger, fear, regret, resentment, admiration, or cold calculation while his voice remains silent and his body stays still. This can make Nacho frightening, as it does when his boss Hector Salamanca goads him into a sudden explosion of violence against the mild-mannered underling whose payment was short that week. (The poor guy winds up getting strangled in a basement by Walter White, so there’s not much improvement in his prospects to look forward to.)

But it also makes Nacho weirdly sympathetic and sad, usually when we see him in his civilian job, working for his father’s upholstery business. Whether he’s zoning out after committing that assault and accidentally sewing his own hand, or trying in vain to dissuade Don Hector from pursuing a takeover of his dad’s legitimately legitimate business, you just get the sense that this is the life he wishes he could lead. Without ever articulating it—that wouldn’t be Nacho’s style—Mando feeds this haunted coulda-woulda-shoulda vibe into Nacho’s every move, from getting a gun pointed to his head by Gus’s thugs to purloining one of Hector’s pills when the sick old man drops it on the floor. It’s the thread that sews him together. I hope we see more of him before he comes undone. 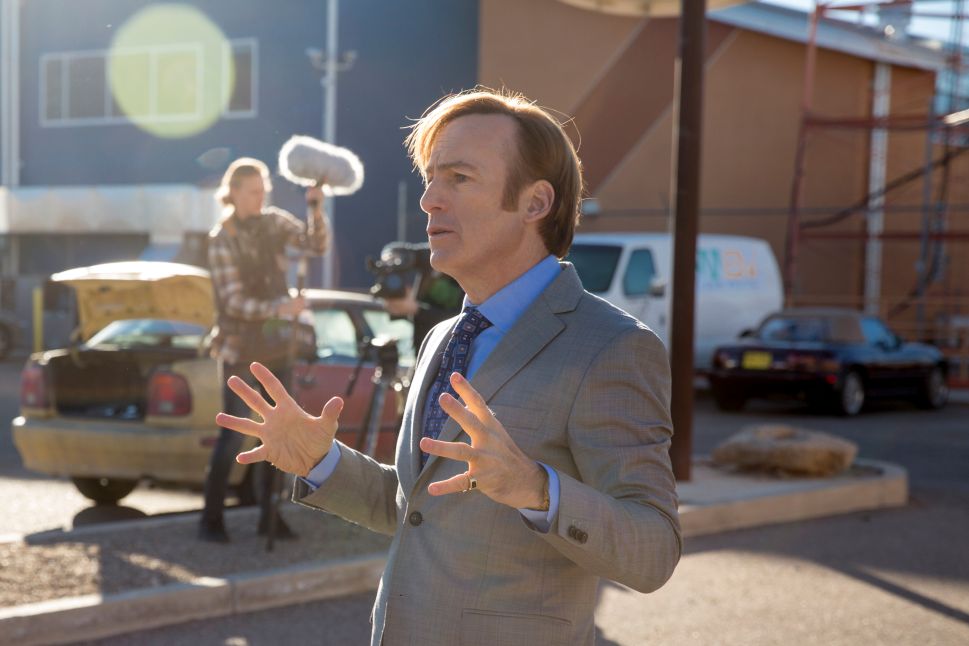