It’s not a cold open so much as a cool, refreshing one: Don Eladio, the drug-cartel king played by the delightful Stephen Bauer, going for a dip in his lovely in-ground swimming pool. Several years later he’ll take a real dive into that thing, victim of a poisoning plot orchestrated by Gus Fring and Mike Ehrmantraut that will leave him and the entire leadership caste of the cartel dead. So much of “Sabrosito,” this week’s episode of Better Call Saul, feels like a direct prequel to that stand-out episode of Breaking Bad that the end result is the most Breaking Bad-esque episode of BCS ever. That yellow south-of-the-border tint to the film, the constant dick-measuring between Eladio and his underbosses Hector Salamanca and Juan Bolsa, Gus getting in the good graces of Albuquerque’s public servants, a confrontation with Hector in the Los Pollos Hermanos restaurant Gus personally manages designed to test his patience, a late-night deal struck between Gus and Mike as two wary men who each respect the way the other does business—it’s all straight from the BB playbook.

If you’re the sort who’s had your fill of Breaking Bad, or simply doesn’t think it should slowly assume control of its Better Call Saul host organism like the alien from The Thing, this might be cause for concern. I still think that concern is misplaced. The vibe may be familiar from BB, but it’s still unmistakably BCS in pacing and staging; as director Thomas Schnauz has noted, even the scene at Don Eladio’s compound, as direct a throwback as you can get, was shot with a more stationary and staid camera than they’d have used on the previous series.

For another, there are these incongruous “awwwww” moments that Gus never really occasioned before, and Mike only experienced with his granddaughter: the genuine concern of the Los Pollos Hermanos assistant manager Lyle for his boss when he shows up to deal with Hector and his goons, say, or Mike telling Jimmy he didn’t mind actually doing the repair work on Chuck McGill’s door he was hired to do as a ruse. “Nice to fix something for once,” he says, a far sweeter and sadder sentence than it seems knowing what we know about his future line of work. Seeing him read a copy of Family Handyman magazine in his tollbooth kiosk just before Gus makes his fateful job offer is enough to break your heart with thoughts of what could have been. In a just world, Mike would be collecting his police pension and working part-time at the Home Depot just for run. Instead, he’s being drawn in to some elaborate plan of vengeance against Salamanca, in which the old man’s attempt to strongarm his way into Gus’s far more successful and safe drug trade routes seems to be exactly what Gus was looking for when he hired Mike to mess with Salamanca’s couriers in the first place.

But Gus isn’t the only guy playing a long game here. Even after all this time, I still find myself surprised by how well the Jimmy halves of any given Better Call Saul episode command my attention when they’re on screen (even if, speaking frankly, I’d be perfectly content with The Mike Show alone). This week, Jimmy and Kim collude in a fashion that’s sort of a white-collar (or is that Walter White-collar?) version of Mike’s customary advance planning. Kim spends god knows how long calling up every repair service in the phone book before she finds the one Chuck McGill hired to fix the door Jimmy busted down, cancels the appointment, and sends Mike himself instead. Posing as a jovial handyman (sample quote: “Turns a morning job into two days with me, myself, and Ben-Gay!”), he uses a battery-operated power drill to spook Chuck up into the second floor of his home, then surreptitiously takes pictures of the lawyer’s luddite living conditions for Jimmy. I can’t decide what’s funnier about this section: The bifurcated shot in which Chuck approaches Mike from one side of the screen only to turn tail and scamper upstairs when Mike, overhearing his approach, revs up the drill; or Jimmy going through the photos and telling Mike “You, my friend, are the Ansel Adams of covert photography.”

Enter phase two: The big sit-down between Jimmy, Kim, Chuck, Howard, and Ms. Hay, the very friendly prosecutor who’s overseeing their deal. Beginning with an exchange of names—“Jimmy.” “Howard.” Jimmy.” “Howard.” “Kim.” “Chuck.” “Kim.”—that’s just a “Doctor Scott!” away from Rocky Horror territory, it devolves into a tense exchange over seemingly picayune matters that are really anything but. Chuck and Howard seem intent on entering the destroyed cassette tape featuring Jimmy’s confession into the record, without specifying its contents; Jimmy and Kim appear equally determined not to let this happen. At any moment, particularly after the prosecutor insists on a personal apology right then and there, you suspect Jimmy will get fed up with his brother and blow up at him, blowing up the plea deal in the process. (He avoids this, but not without loading his apology with unmistakable subtweets.) The lighting for the scene is a combination of the harsh Office Space palette that’s Jimmy’s signature and the daylight-through-blinds ambiance of Chuck’s scenes—a signal that for this moment at least, they really are on a level playing field.

But Howard and Chuck won’t let that stand for long. Approaching Kim after the hearing (Jimmy all but fled the scene), they insist that the contents of the tape, which they, of course, had duplicated before Jimmy destroyed one of the copies, will be entered into evidence at Jimmy’s disciplinary hearing before the bar association. Kim relays this news to Jimmy with a single surprising word: “Bingo.” They stride out of the courthouse side by side into the blue afternoon, looking every bit like a pair of power players. Their ultimate plan isn’t clear, but it seems to be a Billions-style “Golden Frog Time” move, where they seem to sacrifice themselves in order to take down the real opponent. Flash forward a few years later to a poolside full of poisoned people in Mexico and you’ll see how this strategy can bear fruit. 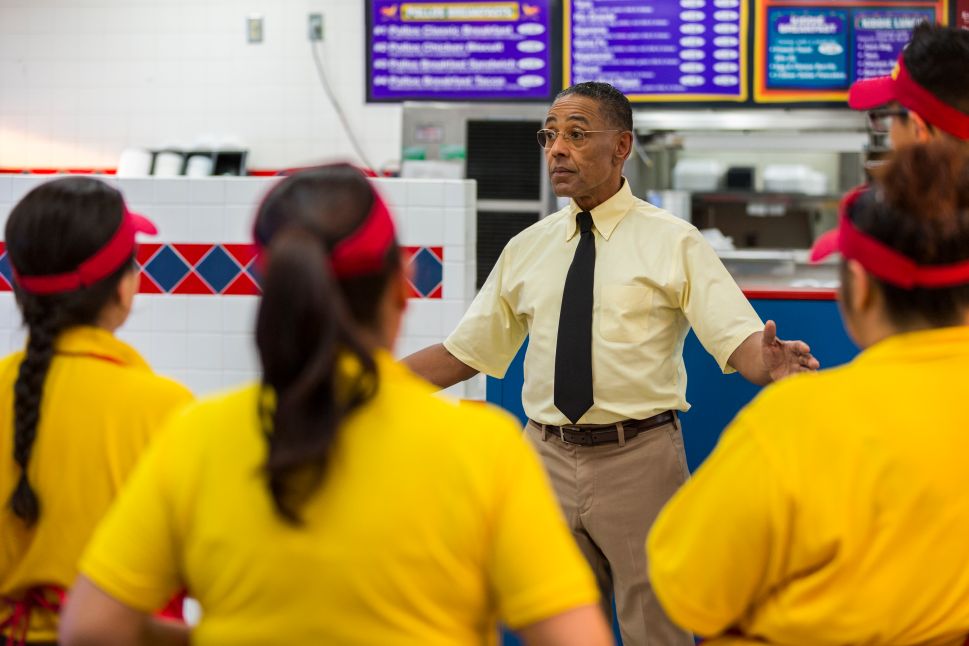