On Friday evening, The Town Hall flooded with Brazilians of all ages, sizes and colors, giddily searching for a seat as close to the stage as possible. Several friends recognized each other and exchanged pleasantries in the aisles. One man pulled out a sheet of stickers he printed that read, “I stand with Lula,” handing them out to his friends in solidarity for Luiz Inácio Lula da Silva, the former Brazilian president and founder of The Worker’s Party who spawned a nonpartisan movement focused on changing the way that Brazil seeks to acknowledge, support and reform its poorest communities.

The audience’s empathy toward Brazil’s marginalized and forgotten people was celebrated by who they were there to see—Elza Soares, 79, matron of Samba music and Brazilian National Treasure.

To call Soares’ story “rags to riches” would be reductive—she grew up in one of Rio de Janeiro’s poorest favelas, Moça Bonita, in the Padre Miguel neighborhood, her father a factory worker and her mother a washerwoman. Soares was forced by her father into marriage at 12, and only went on the talent show that introduced her voice to the world a couple of years later when she needed to buy medicine for her child. Asked by the host what planet she was from, she replied, “The same planet as you, sir…Planet Hunger.”

Countless tragedies attempted to dog Soares’ ambition in the years that followed—losing a child at 15, becoming a widow at 21 and having to raise five children on her own, a marriage to the soccer player Garrincha that had her threatened and ostracized by a public that called her a gold digger and a home wrecker. The two were exiled in 1966 by Brazil’s military junta. Garrincha would later be behind the wheel in a car accident that killed Soares’ mother.

Thirty-eight albums later, Soares continues to put all her pain, desires and yearning into the music. Her set at The Town Hall last Friday, part of The Red Bull Music Academy Festival, was heavy on tunes from last year’s blisteringly innovative A Mulher do Fim do Mundo, a collection of songs written for Soares by producer Guilherme Kastrup and players from the samba sugo, or “dirty samba” scene.

Fulfilling Soares’ intentions to make an album about “sex and blackness,” Kastrup and the band turned out a collection that finds the swagger of samba with radically inventive arrangements spanning acid jazz to post-punk, creating some grooves you’ve never heard before, the kind of Marc Ribot-esque riffs that might fill a golden-era Tom Waits recording worked into a fluid, sumptuous samba rhythm. The stories she tells on the album are no less challenging, as Soares takes her audience to the favela with stories of loss, racism, violence against women, gay and transgender people, prostitution and seething anger.

She delivered them from atop a gothic throne on Friday, with the sort of black and sinewy carpet collecting at her feet that Tim Burton would dream up in his nightmares. The band flanking her sides, Soares belted from her gut, and fans who were dancing in the aisle during openers Forro in the Dark took heed to just sit down and soak up her majesty as soon as she began.

The Observer spoke briefly to Soares, with the help of a translator, about her new album, how she keeps the fire in her belly, and what it’s like to be now celebrated by a country that used to hate you.

What was it like to open The Olympics last year, given the country you were celebrating once exiled you?

Participating in the opening of the Olympics was emotional: before anything else, I am Brazilian and I love my country—despite being exiled in the days of the dictatorship…It was difficult for all of us struggling for freedom of expression!

But between the Olympics and the government corruption scandals, can you say that anything’s really changed at all?

I always say that Brazil is one of the most beautiful countries I know…a country where, if planted, everything grows—even that which is not good! Brazil is a rich country, it was not for anyone to starve, it was for everyone to have their land and live with dignity, but it robs itself too much.

You’ve said that The Woman at the End of the World rejects certain things. What parts of your autobiography do you think this collection most challenges?

In my new work I defend what I believe. [In] A Mulher do Fim do Mundo, I speak of racial prejudice, of homophobia, and violence against women…I will always defend the black, the gay and the women, these are my flags! I had to fight hard not to be prejudiced. Prejudice, whatever it is, is the stupidest thing of the human race.

“Misery is not to be ‘appreciated’ and banalized.”

How did the collaborative spirit of this record work, and how does it feel to have people work for you to perform?

My encounter with this generation of new São Paulo composers—who are innovating Brazilian music with all that is the most modern in the world—is happiness for me that you cannot imagine. The result could only be this, a well-awarded record and show!

What excites you most about the “samba sujo” scene today? Who’s really not afraid to get their hands muddy?

I am excited by modernity, the new. I’m excited by risks; I do not like the comfort zone of doing the same things. It makes me restless to always do what everyone else does. I’m different and I like what is different!

When you told the host of Calouros em Desfile that you were from “Planet Hunger,” were you already planning to use your public platform to put people of power in their appropriate place?

When I told Mr. Ary Barroso in his talent show that I was from the Planet Hunger, I meant that we are all the same. Hunger can reach anyone.

The television show The Simpsons suggested that the Brazilian government paints poor neighborhoods bright colors so they didn’t look unattractive to tourists, is that true?

I do not know, but I am against taking tourists to show the misery in poor communities. Misery is not to be “appreciated” and banalized.

You’ve said before that your life could be made into a film, and I think anyone who’s ever heard your music would agree. What would that film look like, stylistically, visually. Who would play you? What genre would it be?

I’ve lived through so many things in my life that even I do not know how I survived…actually, my life could make a movie script. Maybe my movie would be of the genre “Tragicomedy.” [Laughs] There is a project in progress to make the movie of my life…

How have you managed to keep the tireless punk attitude toward addressing assholes and cowards through your work, despite being showered with so much praise, recognition and veneration?

Elza Soares returns to New York on August 5 for a free show as part of Brasil Summerfest. 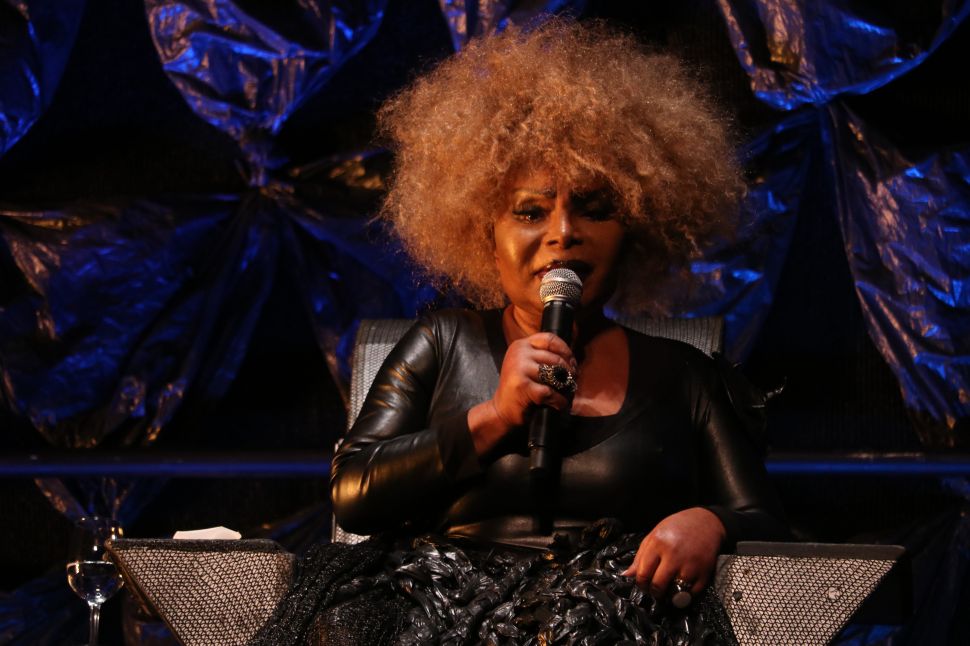