“When we cheat, we have a tendency to rationalize the behaviour. We can’t change the past, so we change our attitude and justify our actions. But that adjustment, while it may make us feel better, also makes us more likely to cheat again: we cheat, we rationalize it, we accept it, and we cheat once more.”

Unless you’ve been training under a rock, you’ve undoubtedly heard of the term “cheat meal.”

The idea is to stick to your diet during the week, and then on the weekend (or whenever you choose) indulge in one “cheat meal” to prevent your body entering into ‘starvation mode’ by resetting your metabolism and giving your brain mental reprieve.

Maybe you’re using cheat meals in your diet right now, or maybe you’ve tried using them in the past. However, if you aren’t familiar with the term, allow me explain: For this one meal, you can eat whatever you want (pizza, doughnuts, ice cream) instead of the usual bland “clean” diet that you eat during the week. The story goes, by doing this everything will be glorious and you’ll be “ripped” in no time.

You know how people say, “if it sounds too good to be true then it probably is”?

This is one of those times.

Cheat meals are a bad idea.

Not only do cheat meals usually lead to overeating, an excessive calorie surplus, and the undoing of all your hard work, but ‘starvation mode’ for the average gym goer is a myth—period.

I’m not saying starvation mode isn’t a real thing. It is. However, to be anywhere close to entering starvation mode you would have to eat less than the body requires to function for a prolonged period of time—most likely weeks or months.

Research shows that even after fasting (not eating anything) for 60 hours, resting metabolic rate (RMR) is reduced by only 8 percent.

Think about that. If after eating nothing for 60 hours, your RMR is only decreased by 8 percent, then missing a meal or fasting for a day will not put you anywhere near starvation mode. In fact, research (1, 2) shows that short-term (36-48 hours) fasting can even increase metabolic rate by 3.6-10 percent.

Why do people bother with cheat meals?

Leptin is a hormone produced by fat cells in your body to control metabolism and hunger. Its role is to regulate energy balance and prevent you from either starving or over-eating.

However, when you eat in a caloric deficit and your body fat levels decrease, your leptin levels also decrease. This in turn reduces your resting metabolic rate and increases your hunger.

Now you know why you always feel so ravenous when trying to diet down to low body fat levels.

Here are 3 reasons why.

There is this phenomenon in the fitness industry that in order to be successful at dieting you must be miserable, that to reach your goals you have to struggle, and to lose weight you can’t have a social life.

With this being the norm, it’s no surprise that your diet is structured around restrictive and often bland options during the week with a cheat meal being the saving grace that’s meant to keep you on track.

The problem is, when you get to the weekend, your cheat meals quickly turn into all-out binges as you relax and let loose on the foods you’ve been craving all week.

This really shouldn’t be too surprising when you consider that research shows restrained or restricted eaters consumed significantly more than their unrestrained counterparts, while also displaying greater cravings, likings and desires to eat cued (olfactory and cognitive cues) foods.

This means that when the weekend rolls around and you smell, think of or see adverts displaying the food you’ve been restricting all week you’ll be much more likely to overindulged than someone who eats a balanced diet (including the foods they like).

Is it any wonder then, that in the blink of an eye you find yourself in the routine of being “good” during the week and then throwing caution to the wind at the weekend because you feel like you deserve a treat?

Just think about it…

…it’s the end of a hard week and you’re bored of the strict “clean” diet you’ve been eating. Now, finally it’s time to eat food you’ll enjoy. But, before you know it, you’ve way exceeded your caloric allowance for the day and probably all weekend—not to mention eating into the deficit you’ve been working so hard to create all week.

In a flash, you’re staring at an empty pizza box, surrounded by sweets and chocolate, wondering how you got there.

Back and forth you go, until ultimately you decide to give up and pack it all in.

Cheat meals reinforce the idea of good and bad food.

Cheat meals contribute to the development of the mentality of “good” and “bad” food.

This often leads to unhealthy, unproductive and downright unnecessary eating habits that send your cravings through the roof.

The fact is, no food should be labelled good or bad.

However, this is this view that foods like ice cream, pizza, burgers and chips (to name a few) are bad persists.

This is because these foods are generally:

Of course, not all food is made equal, but to demonize foods that don’t have a low-calorie count or high levels of vitamins or minerals was foolish by the diet/fitness industries. The concept or “good” or “clean” foods will lead you to a place of restrictive eating, guilty feelings and self-loathing.

Have you ever noticed that when you “cheat,” or stray from diet, you are racked with guilt and often end up going all out, only to feel like you should make up for it the next day? This often results in behaviors like eating very little or fasting for the whole next day.

In reality, if you were to include the foods you love in moderation by using a portion of your daily caloric allowance to account for them, you’d avoid this whole saga to begin with.

No longer would you lose control and eat enough doughnuts to qualify for stock shares in Krispy Kremes.

Cheat meals are often high in fat and ineffective at raising leptin levels.

You might ask yourself why this matters. If all you’re looking for is a bit of mental break from the restriction you put yourself through during the week, why does it matter if what you eat is high fat?

Thankfully, this one is easy to answer, and goes a long way to demonstrate why cheat meals are a bad idea.

This same study and another also showed that carbohydrate overfeeding resulted in increased energy expenditure over a 24-hour period whereas fat overfeeding did not.

Further, another study measured the effects of isoenergetic meals, (either carbohydrate or fat) and fasting on leptin levels in 22 (11 men and 11 women) young, healthy subjects.

In both genders, they found that the leptin response was higher after the carbohydrate meal, compared to both the high-fat meal and the fasting.

Add to this the fact that your body is predisposed to use carbohydrates over fat (when both are present) as its primary energy source, and you can see why it’s time to do away with sloppy, uncontrolled cheat meals that lead to binging, overindulgence and weight gain.

What you should do instead of cheat meals.

Instead of using cheat meals you should use refeeds to counteract the effects of low leptin and reignite your fat loss.

A refeed is commonly described as a planned increase in calories used when dieting to negate some of the downsides of eating in a calorie deficit. Namely:

Refeeds do this by boosting leptin levels.

The first step is to determine how often you should refeed.

If you are pretty lean (10 percent body fat) or have been eating at a deficit for a long time, you are more likely to be suffering from metabolic adaptation. Also referred to as adaptive thermogenesis, this is the decrease in energy expenditure primarily as a result of a decrease in activity levels as a result of eating in a calorie deficit.

If this describes you, start with one refeed day a week.

If you’re above 10 percent body fat or in the early stages of your fat loss diet, start with a refeed once every two weeks and adjust from there depending on your response.

To set yourself up for the refeed you want to raise your caloric intake to maintenance level and then set up your macronutrients as follows:

It’s as simple as that.

What if you’re not eating in a deficit?

The fact of the matter is if your diet is set up properly, cheat meals aren’t necessary; it’s all about balance and meeting your daily caloric needs.

Hitting your daily caloric and macronutrients needs are the most important factors when it comes to losing fat or building muscle. If this is includes sweet treats and other foods you love, there is absolutely nothing wrong—you just have to account for it.

If you do this when building muscle, you’ll avoid putting on excess weight from your “cheat meals” while still enjoying the foods you love and making progress.

The bottom line: dieting shouldn’t be a struggle!

Whatever you decide to do, you should never eat in a restrictive way. It will inevitably lead to unhealthy eating habits, a negative relationship toward food, and the abandonment of your goals.

There is no reason why you can’t have your cake and eat it too.

Theo is the founder of Lift Learn Grow, where this article originally appeared, a blog that helps you build the body of your dreams without sacrificing your lifestyle. With a focus on lifting heavy weights and eating the foods you enjoy Theo helps you reach your goals and love your journey. Join a growing community of like-minded people and get the tools you need to build the body you want. 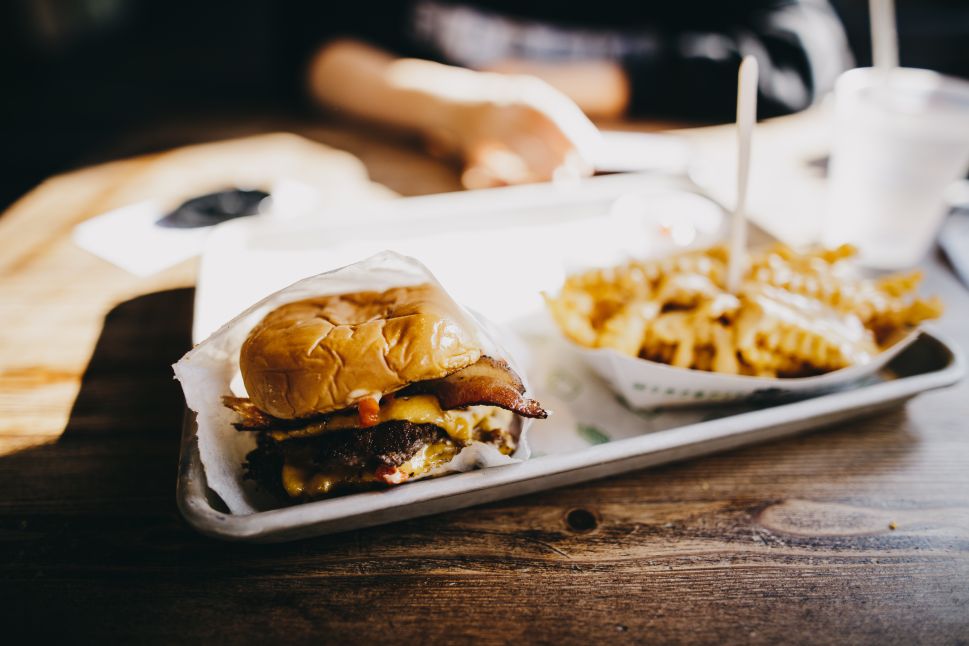