Christopher Meloni would like to say he’s sorry. Not to me, per se, sitting across from him in an airy loft above NoHo’s cobblestoned Bond Street, but to his 233,000 Twitter followers, mostly. Maybe a little bit to 20th Century Fox, the studio behind Snatched, in which the actor appears briefly but memorably. Possibly, in a more roundabout, elliptical sort of way, he’s even saying sorry to Snatched co-stars Amy Schumer and Goldie Hawn. “I find it very difficult to stay on point with all the promotion that I should be doing,” Meloni says. “I want to sit here right now and say I do apologize for being distracted at times with the magnitude of the horror that is this administration.”

That’s the Trump Administration, by the way, as in comma Donald. As in current President of the United States / former host of The Apprentice. As in the man who fired FBI Director James Comey just 24 hours after Meloni and I met to discuss a funny little comedy in which he plays a wannabe Indiana Jones-type named Roger. But if you want your “celebrities, they’re just like us!” moment, understand that Chris Meloni is having that relatable issue focusing on his work, on his art, on the comedy of it all when he feels that every refresh of the Twitter page brings Mad Max: Fury Road one step closer to becoming a documentary.

“I’ve found this administration, and their stance not only on institutions but facts and numbers, is an outright attack on truth. Which, with every autocrat and in any dystopian novel, that’s rule number one,” Meloni tells me. “That there are still followers, I find that very dangerous. And that the attack from people who agree with the administration is to paint it as an ‘us vs them’ situation. Especially us, the libtards, the Hollywood libtards.”

From the moment Meloni noted that he “woke up in a George Orwell novel today,” the actor has been an active, outspoken and occasionally shirtless voice of #resistance. “The message—which I’m very poor at conveying, I’ll be the first to admit—is that the fight is not ‘us vs them,’” he says. “The fight is not against anything. It’s for truth. And you have to agree on the truth. You can have debates on it, but you can’t just…”

He trails off, gazing at his hands. After all, he is here to promote Snatched, not a revolution. Finally, he looks up. “At the end of the day, you can’t deny the science of something like climate change,” he says. “You just can’t.”

Meloni’s eyes, more like two storm clouds somehow bored into a rock face, have a way of making simple phrases like “you just can’t” sound very much like a universally acknowledged fact taught in schools across the nation. Of course I’m not going to argue. If any actor has to keep an eye (or two) on our politicians, maybe it should be Chris Meloni.

Actually, we should probably talk about the eyes. Have you ever had Chris Meloni squint at you? It’s terrifying, it really is. It’s the squint that served him so well over 12 seasons and 273 episodes of Law & Order: Special Victims Unit as Detective Elliot Stabler. It’s the gaze that—and this is a compliment—makes his August Pullman such an effectively enigmatic bounty hunter on WGN America’s slave-era drama, Underground. Hell, it’s the haunted stare of Meloni’s psychotic yet oddly tender Chris Keller I still remember most from HBO’s groundbreaking prison piece, Oz.

“I’ve had that since I was a child,” Meloni tells me. “I’ve always had a look, a certain stare. It’s not cultivated, it just is.”

Funny enough, it’s that look, the certain stare that allows Meloni to move so fluidly, and so often between drama and comedy. Keep his simmering intensity and simply change the context, and suddenly he’s Roger in Snatched, exuding the confidence of Indiana Jones while displaying the skill-set of your local Sports Authority’s junior manager. Or, if you will, suddenly he’s Gene in 2001’s summer-camp comedy Wet Hot American Summer—David Wain’s veritable who’s who of comedy icons, A-listers and award-winners while they were all anything but—the PTSD-ridden Vietnam veteran who also just so happens to be sexually attracted to refrigerators and prone to conversations with a talking can of vegetables (voiced by Archer‘s H. Jon Benjamin to boot).

In person, Meloni occupies that unique space between comedy and drama near-constantly. He lives in it, probably pays rent. I wondered for a while before this interview what kind of person I’d be speaking to; intense or silly? The slave-catcher or the faux-adventurer? The horror show that was his Oz character, or the freak show that was, well, his Freakshow from Harold & Kumar Go To White Castle? The simplest answer is that he’s both, simultaneously. He jokes, loud and often; when a member of his team requests some tunes, the actor puts on Manchester-based pop-rock band The 1975, a suggestion from his 16-year-old daughter. And yet whenever these endearing moments of levity do come up, Meloni’s smile never quite un-arches those interrogation room eyebrows. It’s not a surprise, then, that the method he describes for choosing his next project is an internal one, almost a zen process.

“Well, the spirit moves you,” he explains. “The soul starts to need a different way to express itself. Whether you’re immersed in comedy and suddenly you want to check out a drama, or if you’ve been living in drama you might need a release valve. I’m led by how I feel.”

Recently, the spirit led Meloni into the director’s chair for only the second time in his career, when he helmed the season 2 episode of Underground, “Auld Acquaintances.” It was a far cry from his first effort—a co-directing credit on National Lampoon’s Dirty Movie in 2011—that required, but was not limited to, blowing up a house, working around lead actress Jurnee Smollett-Bell’s real-life pregnancy, and a lengthy, half-drunk monologue from his own character. “As an actor I’m just concerned about me, my point of view vis-a-vi all the other actors and the moment,” he says, then leans forward as if sharing a secret. “As a director, you have to be aware of everything.”

“You’re aware of the scene that happened before, while envisioning the scene after, and where this particular moment resonates, plus where each character’s journey goes from here,” he continues. “Then you have to negotiate that, because maybe your idea doesn’t sit with their idea. You have to make decisions on everything. How big do you want the bottle to be, what’s the gun size? Is there a rug or isn’t there a rug? You have to make sure everyone’s on the same page, and the page is your vision. Where to set up the camera, when that camera moves, how that camera moves.”

Why the expansion into directing? “Well,” he says, “there’s always that thought of ‘Once I’m done with this project, I’m technically unemployed.’”

Classic case of actor’s dilemma, yes, but Meloni is set for the near-future at least. As part of the latest of what seems like many brand reboots, the SyFy network ordered a pilot for Happy!, adapted from Grant Morrison’s graphic novel. Meloni will star as ex-cop turned mafia hitman Nick Sax, who gets his life back on track with the help of a tiny, blue winged horse voiced by Saturday Night Live‘s Bobby Moynihan.

Which is great news for fans of a dead-eyed Chris Meloni speaking to imaginary friends. In June, the actor also reprises his Wet Hot role for Netflix’s Wet Hot American Summer: 10 Years Later (set a decade after the 2001 original, and acting as a follow-up to Netflix’s surprisingly ingenious First Day of Camp). “It’s all set. All in the can. Ready to roll,” Meloni says on the status of the Wet Hot sequel, but is genuinely tight-lipped about where we will find the appliance-loving Gene.

The actor takes a long pause, then finally tells me “Gene is a solitary figure leading a life of mystery. He’s trying to get his act together. He’s finding a purpose.”

But it wasn’t plot-points that brought Meloni back to Camp Firewood in the first place. 10 Years Later reunites the cast—loaded with names like Amy Poehler, Bradley Cooper and Paul Rudd—as well as original creators David Wain and Michael Showalter.

“I know those guys. I trust their sensibilities so much, know their work ethic,” Meloni says. “They have such a command of the material that it’s really a no-brainer for me. I tell people all the time, it’s like going home again.”

He sits up straight then, coming to a much, much more appropriate analogy. “It’s like going to camp,” he says. “You get to play with all your old friends.”

At that, I swear, his eyes almost soften. Almost. 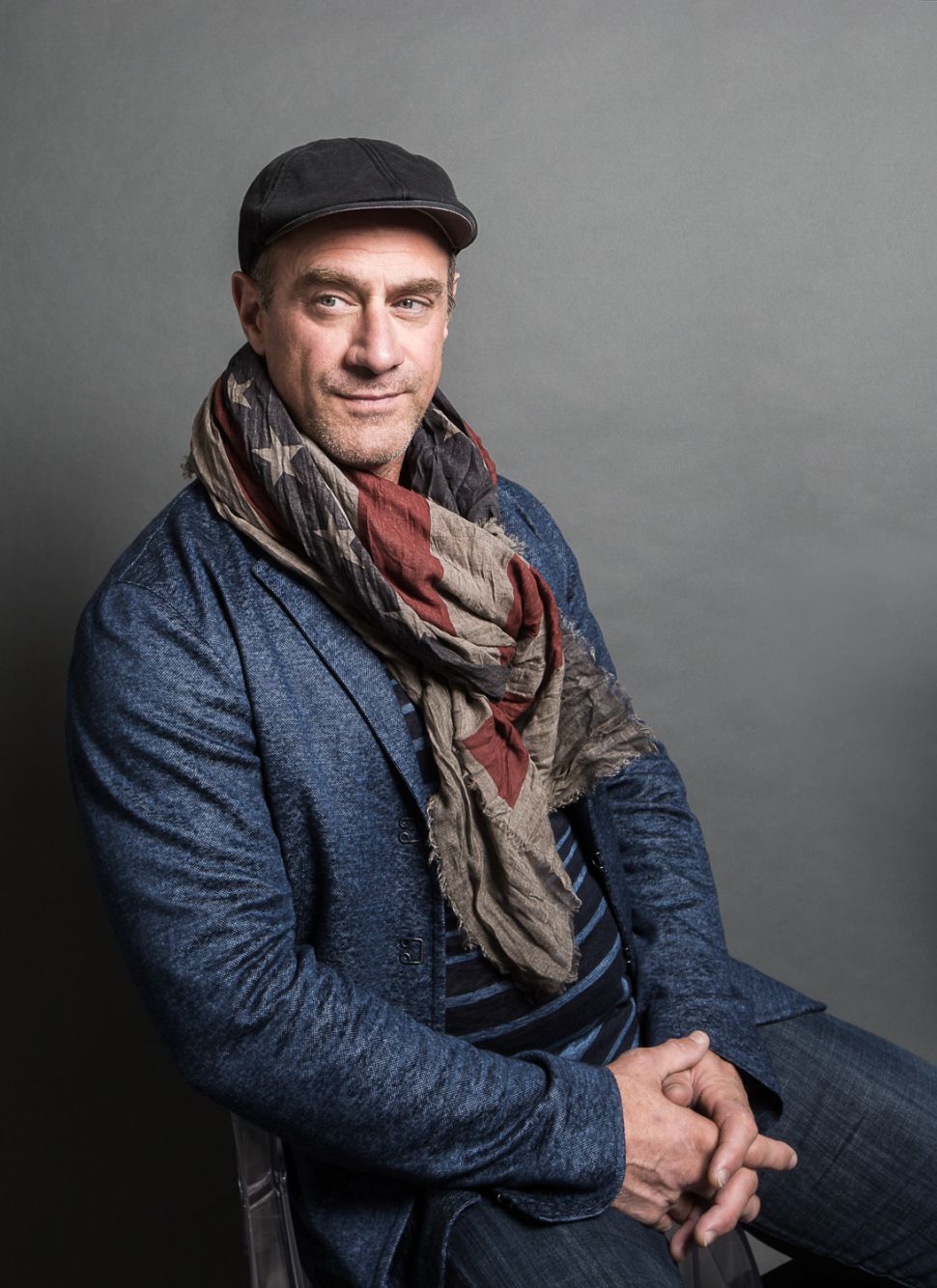