The time has come, the Flamekeeper said, for us to all senselessly murder each other three days before the End of the World. No one thinks this is a good use of anyone’s time, what with the near infinite number of checks and lists that are probably being poured over by the poor suckers trying to get the bunker squared away for a lucky few who won’t have to die in a Hell fire. And with that, this action-packed, battle-heavy episode gets off to about as rough a start as expected. Here, in all its bloody glory, is your blow-by-blow of the final conclave to save humanity.

Overseeing the bloodbath is Gaia, who herself boasts an allegiance to Trikru. The rules: each champion (chosen warrior) wears their clan’s sigil around their neck, and the last fighter standing must bring the Flamekeeper the pendants of their fallen opponents in order to claim the bunker for their people. Other than that, it’s strictly one warrior per clan (no help from friends!) and the whole city is fair game.

At the sigil ceremony, guess who predictably shows up to fight for Trishanakru. Yup, that would be Ilian! However, Octavia (who is fighting for Skaikru) seems genuinely surprised to see him, though definitely not pleased because his participation means one will have to kill the other before the game is over.

As Gaia ushers in the festivities with some obligatory pronouncements, along the lines of  “We honor those who fall by the sword, but follow the one who wields it best,” another surprise comes rolling in. This time, it’s Luna: “That would be me!” she screams through the crowd. And here is Luna’s defining moment. I’ve complained more than once this season that Luna’s character has flailed between apathy and genuine ill will for the survival of the human race, both feelings stemming from her own hang-ups. Not that she’s the last surviving member of the Boat People, it’s clear that she’s chosen which side she’s on, and that would be death. Claiming her sigil, she tells the crowd that when she wins no one will be saved.

Before any big battle, there are words of wisdom, better known as the pep talk. Indra has a heart-to-heart with Octavia, who has chosen to sport Lincoln’s signature war paint for the occasion. In an unusually affectionate gesture, Trikru’s war chief hands over her sword to Octavia, telling her that while helping her might mean the end for her clan, “You are my people.” And then I cried a little, because the surrogate mother-daughter moment left me more anxious than I already was for the big fight scene.

If the mommy love wasn’t enough to motivate Octavia, Marcus and Bellamy’s dueling strategies for battle are sure to do the trick. Marcus gives tips on everyone’s weaknesses, while Bellamy advises a different approach: hide, and let everyone else kill each other first. That way, she doesn’t have to kill all twelve warriors, just the last one.

Meanwhile, Clarke’s version of a pep talk doesn’t go over nearly as well. She pleads with Roan one last time for an alliance between Azgeda and Skaikru in the conclave. But he’s wont’ have it, and instead takes the opportunity to scold her for not respecting Grounder traditions as well as assure her that if he dies he could care less what happens to anyone when the apocalypse arrives. Clarke, on the other hand, plays the martyr: willing to die even if that means someone else’s people get to live.

The drums beat, the horns sound, and the conclave begins. Octavia has about the same look I have watching from my couch: terror.

The killing begins lickety-split with Roan killing a man by smashing his head with an axe, and quickly wasting Trikru’s champion by sword. Gaia, from the tower, watches in horror, and as the Trikru’s symbolic flame is snuffed out marking their loss in the race the mother and daughter share a hug to cry out the loss of their clan.

Eventually, Octavia and Ilian find each other on the field. While Ilian is eager to make an alliance, she reminds him that she’s “not the girl he wants her to be” and that the next time they meet she’ll kill him—she promises. Nothing like a death threat says I love you.

From the tower, Bellamy spots what he suspects to be cheating when he sees a masked sniper who he suspects to be Echo with a bow and arrow firing from a window perch. But trying to intervene would mean he’d break the conclave rules (remember, no help) and if he’s caught he’ll doom all his people to death. Naturally, Marcus tells him to wait until dark.

Back on the field, Octavia’s hiding doesn’t work out too well when she’s cornered by three clan champions at once. Until Ilian comes jumping off a building to her aid in even more dramatic fashion that Roan’s magnificent car chase jump earlier this season. But just before she can tell him to buzz off again, he’s shot through the neck with an arrow. I actually gasp because 1) it’s extremely graphic and 2) I honestly didn’t see that coming. I really thought the two of them would end up killing Luna together in spectacular fashion and then wrestle Roan into some sort of alliance. But alas, farewell Ilian, your fight is over. Ilian begs Octavia to kill him, because after all she did promise.

Under the shadow of night, Bellamy sneaks onto the field to find Echo and aid his sister. In the distance, as he hides, Luna appears and easily kills a man half her size. When Clarke warned that Luna was well prepared for the conclave, she wasn’t kidding—she’s a natural. Soon enough, Bellamy finds and unmasks Echo just in the nick of time; she was about to put an arrow through Skairipa. But Roan interrupts their fisticuffs, and banishes her from the clan because he has class, and this thing called honor, which apparently she lacks. After a brief exchange of polite insults, he lets Bellamy go. And now it’s just four warriors left.

Roan finds Octavia and, while he may have been resistant thus far to the idea of an alliance, pivots and extends the offer to her. Bellamy, as Roan predicted, gets caught in his terrible attempt to loudly sneak around the city. And Roan and Octavia come face-to-face with Luna almost immediately. But in the heat of their battle, swords flying, the skies open up and black rain pours down. Lucky for Luna, her nightblood status makes her immune, but Roan and Octavia are instantly burned. Octavia makes a break for it but Roan, swept up in battle and the surprise of the acid rain, takes a fatal blow from Luna’s sword. And in an inglorious fashion, Luna drowns the Ice Nation King in a fountain.

One down, one to go. Octavia takes Bellamy’s advice and hides, while Luna stalks her monologuing about her inner darkness. With a bit of trickery, and clever misdirection, Octavia leads Luna into a trap and stabs her in the back. “There are people worth saving, just not you,” she tells her, before claiming her sigil.

In the tower, Octavia presents Gaia with her bloody trophies and reveals to the room that she wasn’t fighting for herself, or Skaikru, but rather she was was in it everyone (but really? because I thought she said a bunch of times she just wanted to fight and die, like, just for her). And in a nod to the Unity Day that joined the space stations and created the Ark after the first apocalypse over 100 years ago, Octavia declares that all the clans will share the bunker, together. That doesn’t necessarily solve the issue that there simply isn’t enough room for everyone. But don’t forget that on that first Unity Day, the 12 stations than joined together blew up the 13th, Becca’s space lab.

We end the week on a sour and totally un-Clarke move for Clarke. In the mess of the battle, she snuck away and colluded with Jaha and the rest of Skaikru to steal the bunker, betraying everyone she’d promised to do almost anything to save. This twist going into the home stretch, can’t end well. At least not for Clarke.

— Could the writers of The 100 really be setting up the ultimate “kill your darlings” scenario, wherein Clarke doesn’t survive? Considering that the show is already signed up for a Season 5, it seems unlikely, but this is also the same show that killed off Lexa, Finn and Lincoln with little remorse. But now Ricky Whittle is on American Gods, so at least he’s gone to a good hereafter.

— Ilian’s death was totally unexpected and moving, but Roan’s hit me slower and harder. To see the King go out like that just ruined me. May we meet again Zach McGowan. 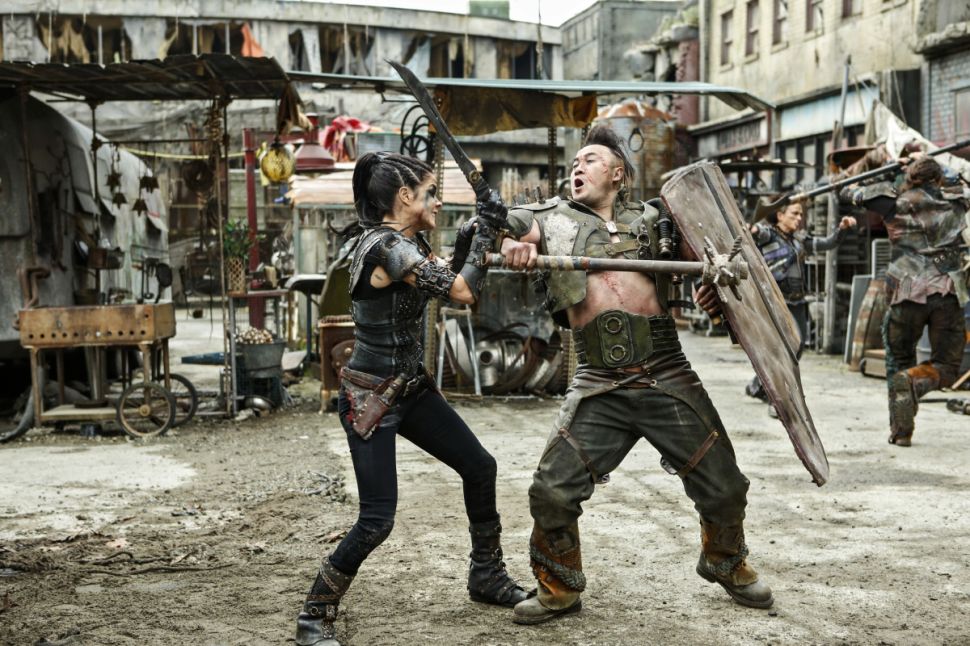