CHANCES OF SURVIVING THE APOCALYPSE: 100 (minus all the people who are going to die)

“I must have missed the election that made you chancellor again,” Bellamy tells an emboldened Jaha at the start of this week’s episode. My sentiment exactly. The former chancellor, who it appears only served a short term as a pariah for his fanatical A.I. coup last season, has quietly reinstated himself as the unofficial leader of Skaikru and led a mutinous takeover of the Second Dawn bunker—no thanks to Clarke. Wanheda, overwhelmed by the unfavorable odds Octavia faced in the final conclave, bowed to Jaha’s treacherous plan to steal the bunker for Skaikru, leaving not only the Grounders to die but several key members of her own clan. Does this really sound like the Clarke we’ve come to know? I think Bellamy would agree with me when I say, I don’t know who this Clarke is—but I’ve seen this Jaha before and I’m not pleased to see him again.

We’ll circle back to the drama at the bunker in a bit, but first a check-up on Raven who, after accepting that death from her brain clot was inevitable, is working furiously to prepare for her launch into space. But with the clock ticking down to Midnight, and a snag in her spacesuit, she begins having dueling hallucinations of Becca and her deceased mentor Sinclair (welcome back Alessandro Juliani!). What if her brain condition isn’t a death sentence, he asks her? Instead of wasting her last bit of brain power on a death trip to space, perhaps she could have a shot at curing her allegedly fatal health condition if she takes one last look at her options.

And so she does, and thank the gods for Sinclair because her gamble pays off and for the time being Raven Reyes is very much alive. But, her cure doesn’t come without a good deal of pain. “You have to be willing to die to really live—I am,” she says, just before dunking herself in a shock-inducing ice bath which will freeze her into a death state just long enough for her to “reboot” her system, a.k.a jump start her heart and rid her brain of Becca’s life-sucking code. So Raven is alive and well, Becca-free, but still alone and stranded on the island far from safety. Someone please answer her distress call!

Now to the Ark, where Jasper’s End of the World party is swiftly winding down, in in part because the gang is starting to feel the effects of radiation poisoning and because Jasper’s last batch of home-brewed hallucinogenic tea is causing some adverse reactions. But Jasper’s not sorry that his followers have begun to overdose on his supply (RIP Riley); he thinks it’s a far better way to go out than melting in the death wave, and proposes they all drink the Kool-Aid together before the radiation levels hit red.

Monty, smartly wearing a hazmat suit, has yet to depart for the bunker and is still lingering to tend to all the drunkards—mostly Jasper and Harper—with the hopes he can get them to choose life at the last minute. But his friends stand firm, and Harper even doles out a harsh dismissal with the hopes of dissuading Monty from missing his own window for survival on her behalf.

And here comes the hard part. We all knew some of the gang wouldn’t make it to see Season 5, and while Jasper has done nothing to make us think otherwise it’s never easy to say goodbye. I’ve had mixed feelings about Jasper this season: his apathy towards survival, which at times became an obstacle for his friends who did want to live, has been frustrating to watch, but as Katie Awad pointed out in a piece for Hypable, just because Jasper has lost the will to live doesn’t make his character arc any less poignant or real. In fact, it’s his choice to die on his own terms (in this case by taking a lethal dose of his tea) that nods to very real world issues such as end of life care and the death with dignity legislation that would allow terminal patients to end their own lives. Both Jasper and Raven struggle with this issue, and their divergent choices beautifully show the complexities of choosing either side.

Jasper’s death is moving and understated, and the scene is driven not so much by his actual demise but by Monty’s inability to let go. As Jasper pleads for Monty to tell him he loves him before he dies—because if Monty doesn’t he’ll regret it—we realize it’s not Jasper we should feel sorry for but rather Monty, who is left behind to reconcile his feelings for his friend and his rejection of his choice to die. When Monty does muster the courage to say those three little words, Jasper is already gone.

Monty prepares to head for the bunker, with none of Jasper’s followers in tow; they’ve all followed Jasper’s lead and bowed out ahead of the death wave. But surprise, Harper has chosen to live after all! She tells Monty she loves him, and at least we head into the finale with one relationship intact.

And now for the drama at the bunker. With tensions high, and Bellamy on the offensive to try and open the bunker and let in the rest of the clans before it’s too late, Clarke and Jaha take drastic action to self-preserve and restrain him.

Abby and Jaha hash out the pros and cons of their coup in a painfully relevant conversation, wherein Jaha defends his completely baffling rise to power (really, who would allow him to make collective decisions at this point based on how shitty his track record is?) by saying, “We put our people first, that’s how we live with ourselves.” How they feel about themselves—guilt—is irrelevant, he explains. But Abby’s not buying it. She conspires to free Bellamy, knock the high and mighty Jaha unconscious and start a revolt within Skaikru’s existing revolt to open the bunker door and let in the rest of the Grounders.

The plan works, right up until the moment when a clear-headed Bellamy is intercepted by an unhinged Clarke trying to open the bunker door. But convincing the already broken leader isn’t too difficult; all Bellamy has to do is call her bluff and let her know that no gun will stop him from saving his sister and doing the right thing—I thought that was usually Clarke’s line? Like Jaha’s surprise pivot to power this week, Clarke’s double-cross seems unusually out of character. Even in her darkest moments (killing Finn, blowing up Mount Weather) her ability to see past petty squabbles and help the Grounders and Skaikru come together for the greater good has always prevailed—until now. A giant WHAT GIVES is all I have to say about her arc this week.

Bellamy opens the door and in a grand and moving gesture Octavia invites the chosen 100 (there’s not enough room for everyone) from each of the Grounder clans into their new home—as one big happy clan. Let’s see how that works out—already I’m envisioning this will be the big tension of Season 5, if everyone makes it through next week’s finale. Skaikru isn’t exempt from having to whittle down its populace to 100 people either. And judging by the look of horror on Jaha’s face as he’s told that this is what needs to happen, selecting the chosen few will absolutely go off without a hitch.

I have way, way too many hopes and fears to fill a handful of bullet points, so stay tuned for a full and separate rundown of all the questions and predictions that are flooding my brain ahead of the finale. 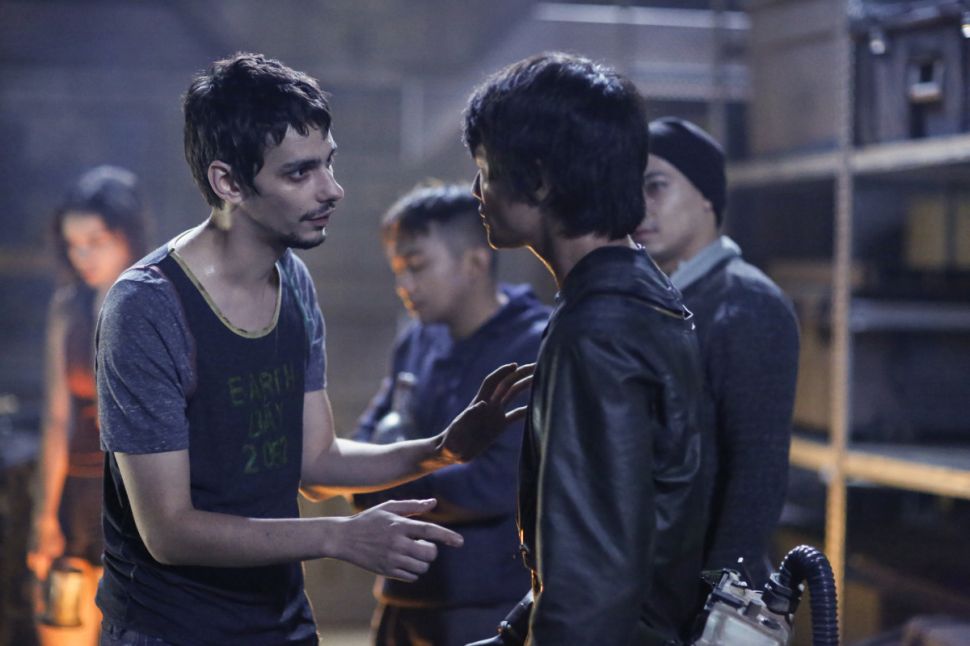