Memes are officially more Googled than Jesus, and many accounts dedicated to sharing this specific variety of internet content have more viewers than many of America’s highest rated TV shows. What we’re saying is, people really, really love memes.

A guy you know as @Daquan is behind most of these images spreading like wildfire. Born in Montreal, Quebec, to an Ethiopian family, Daquan starts his day just like any other 19-year-old: playing Playstation, working out with friends and scrolling through Instagram. Except there is one major difference between him and the average teen—his account, on which he’s shared over 7,000 memes and submitted videos, has become incredibly influential in defining modern pop culture. With over 8.6 million international followers, Daquan is the reigning king of the internet.

In an exclusive interview, the Observer caught up with the man behind Daquan, who despite his internet fame, doesn’t consider himself a celebrity. In fact, he prefers to keep his everyday identity on the down low so much that he’d only do the interview without his real name.

Read the Q&A below for the scoop on how Daquan’s fame translates into his real life, his celebrity followers and his ideas about the current and future states of meme culture.

How did it all start? What was your motivation behind starting the page?

It all started on July 2014 when I was bored in class chilling on Twitter. I saw this meme trend all over, so I decided to make an Instagram account called “yahboydaquan” dedicated to only posting “Daquan” memes. A lot of people were loving the Daquan memes on my Instagram, so I just kept at it and gained over 150,000 followers. When the meme trend died, I started shifting to posting just normal memes, and I just started gaining a lot of followers. And now here I am.

Do you work with other people or do you curate everything by yourself? Have you been able to turn it into a business and develop a team?

In regards to content, I do everything by myself. I know my ​audience ​best. I receive more than 1,000 content requests a day so it​ helps me to stay on top of anything relevant. For the business side, I do have a team of two partners—Barak Shragai and Dor Mizrahi, who are the founders of Comedy.com.

Do your family and friends know that you run a meme account, or do you try to keep it private?

Yeah, everybody in my city knows. It’s been kind of like a nickname for me. There’s never a day where I don’t get called Daquan at least once. Even my mom calls me Daquan.

How has life changed for you since Daquan blew up?

It changed my life a lot, mostly because I know my parents would force me to get a job if I wasn’t Daquan. And now that I have money I can get a lot of the stuff I’ve wanted from before I was Daquan. Also now I have a lot of fans here in my city, so I get noticed a lot.

Have you ever had a celebrity reach out to you? What is the craziest thing that has happened surrounding your page?

Justin Bieber reached out to me because he wanted me to post a funny video of ​him. Another time, Demi Lovato suggested a dope meme. The craziest is just having all these huge celebrities following my page like Justin Bieber, Drake, the Weeknd, Kendall Jenner, Kevin Hart and a lot of others. I’m a huge fan of ​a lot of them, and it’s a really dope feeling.

Did you face any challenges in the early days of the account? What about now?

Earlier it was really hard to gain followers because I didn’t have many. The more followers you have, the faster you gain. So I was gaining really slowly for more than a year, so slowly that I almost gave up. Now, I wouldn’t say there is any hard part, but the exciting part is ​having such a big audience​ that love the account.

Is there ever any competition or beef between other meme pages?

Yeah, like in anything I guess. I try not to get competitive with other meme accounts and focus on my own.

What can you say about the trends of memes? Like one month the “guy-tapping-his-head” meme will be popular, but before that it was the confused Mr. Krabs and caveman Spongebob memes. How does one particular photo become “the meme of the month”?

​To be honest, I don’t even know. That’s what I love about the internet—anything could become a trend. You see a funny meme, you laugh, and then the next day you see the same meme with a different hilarious captions, and boom it’s a trend.

A lot of memes have become incredibly detailed with personal experiences of anxiety or depression that a lot of people relate to What do you think about the shift of memes over time?

Relatable memes are usually the kind of memes that get shared the most, just because when someone sees one they think “I thought I was the only one.” This leads to them sharing the pic with friends. I’d say meme makers are following the audience and current social trends.

​I’d say ​memes are culturally relevant content meant to be passed from one individual to another. People have become accustomed to consuming content faster than ever. Memes are the forefront of that change, constituting as ​sort of ​newspaper headlines in the social world.​ Once a meme successfully creates a strong bond with the audience, it gets shared millions of times and become a trend.​

Do you feel like memes have turned into a form of news, or a way young people can now start talking about politics?

Y​eah, for sure. I think that what happens on social media really affects one’s decision in regards to who to vote for and even one’s beliefs. Just like a newspaper.

What is something you want the world to know about you, outside of your meme page like who you are?

​I’m a huge believer in God. 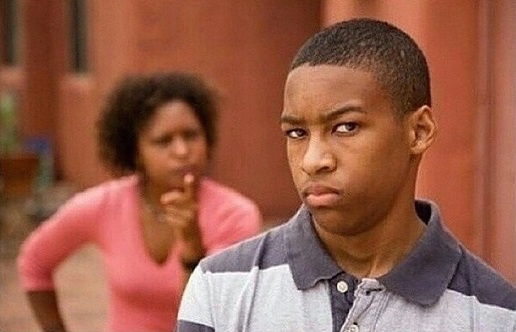