After nearly a decade of rumors and half-starts, with an official announcement only coming in January of last year, the first full-length look at Nikolaj Arcel’s The Dark Tower, based on Stephen King’s eight-book series, is finally here and it’s…suuuuuuper underwhelming?

Maybe that’s unfair; it is just a trailer, after all, while an entire movie has a challenge ahead of it packing in everything from King’s expansive, mythological magnum opus–it’s a little like Game of Thrones with six-shooters–which in itself incorporates characters and locales from other King stories. It’s a lot, is what I’m saying.

But at the same time, something that massive, unique AND starring coolest-man-alive Idris Elba as a gunslinging cowboy warrior shouldn’t leave you feeling, well, nothing. I should be freaking out. Idris fucking Elba is the goddamn Gunslinger. But this, this is like the Justice League trailer; loud, slick but ultimately as lifeless as the desert the Man in Black fled across. Speaking of which: I really wish Matthew McConaughey was doing something interesting with the enigmatic Man in Black other than “Matthew McConaughey wearing a black coat.”

Thoughts? Theories? Other idea-ries? I guess we’ll find out August 4, and until then don’t aim with your hand, aim with your eye. 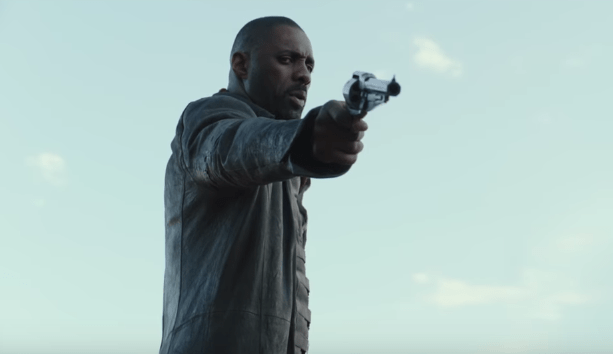