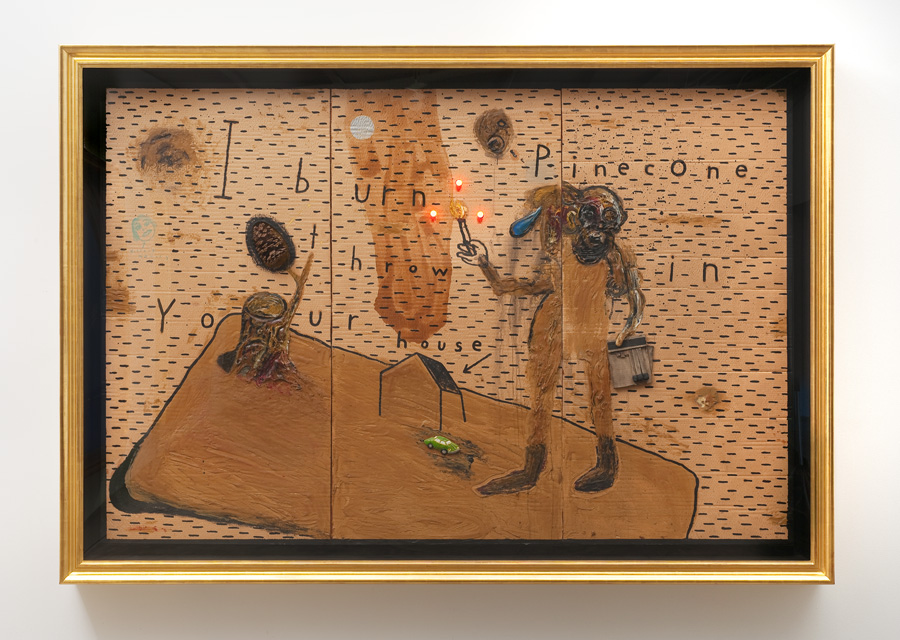 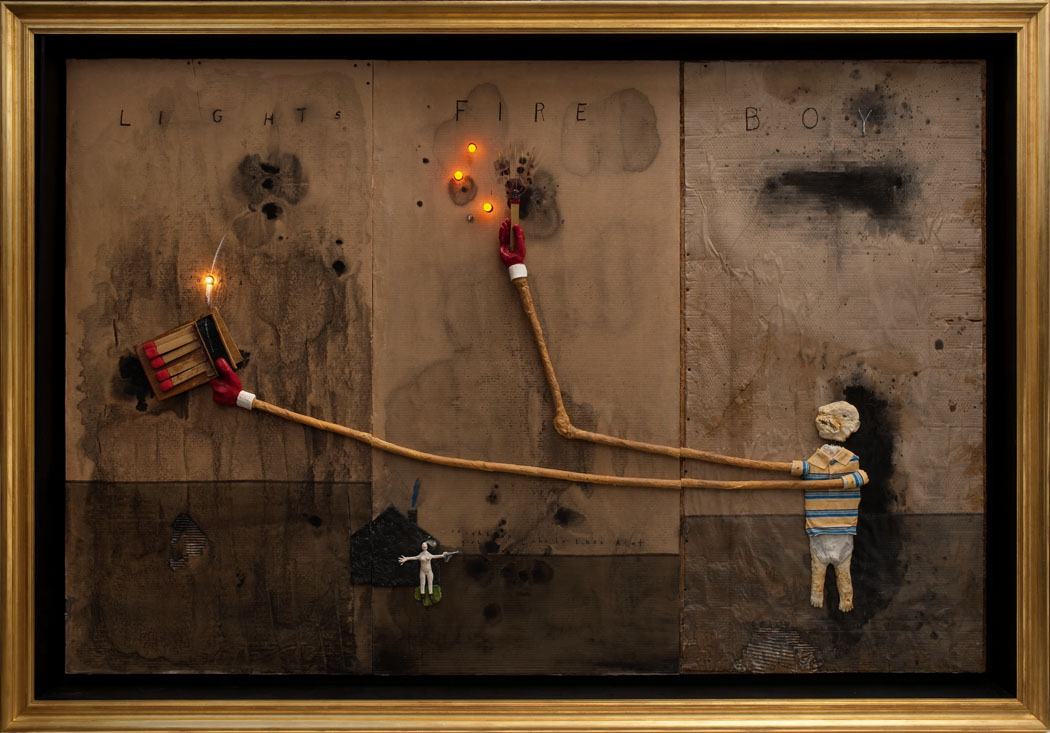 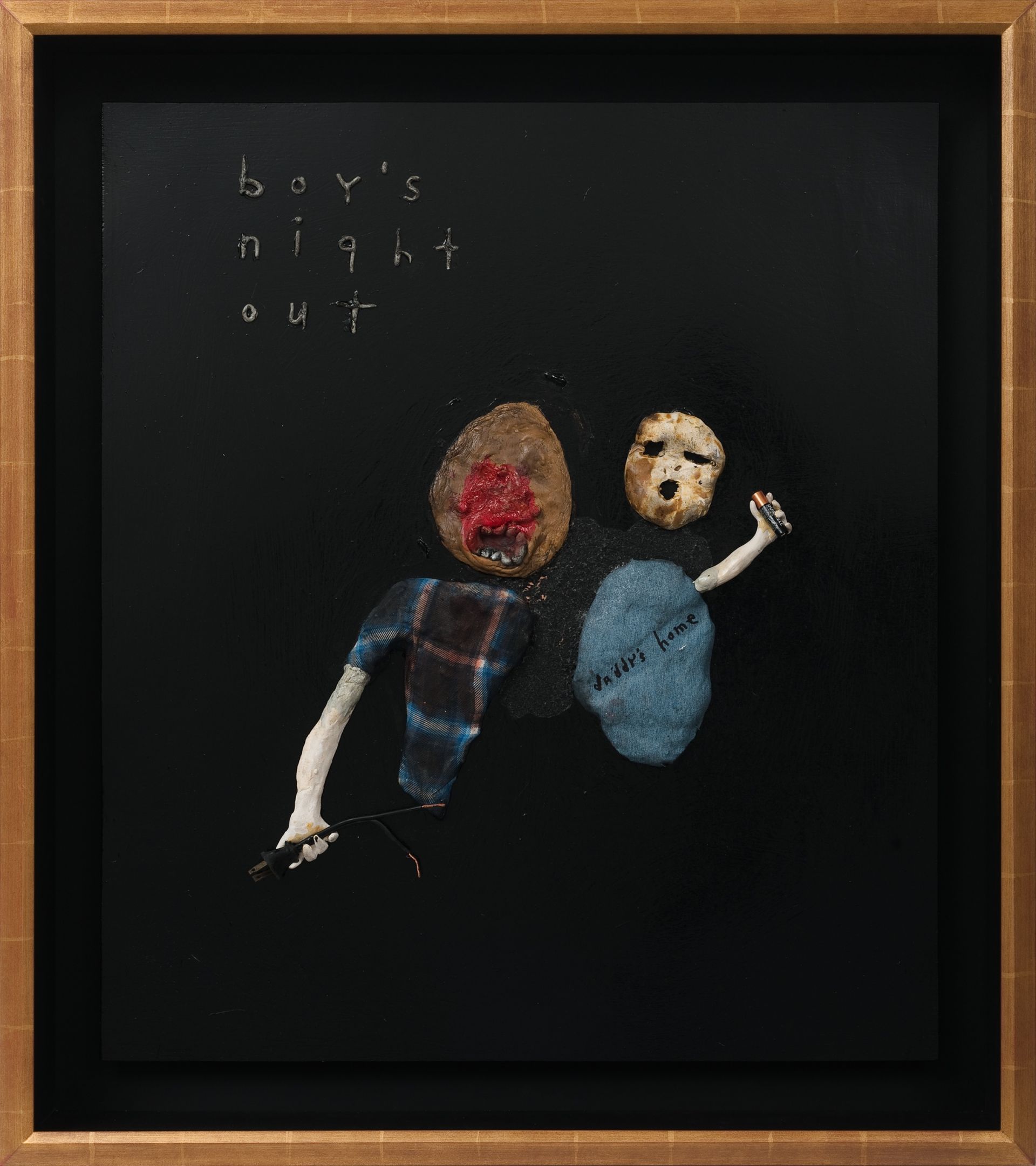 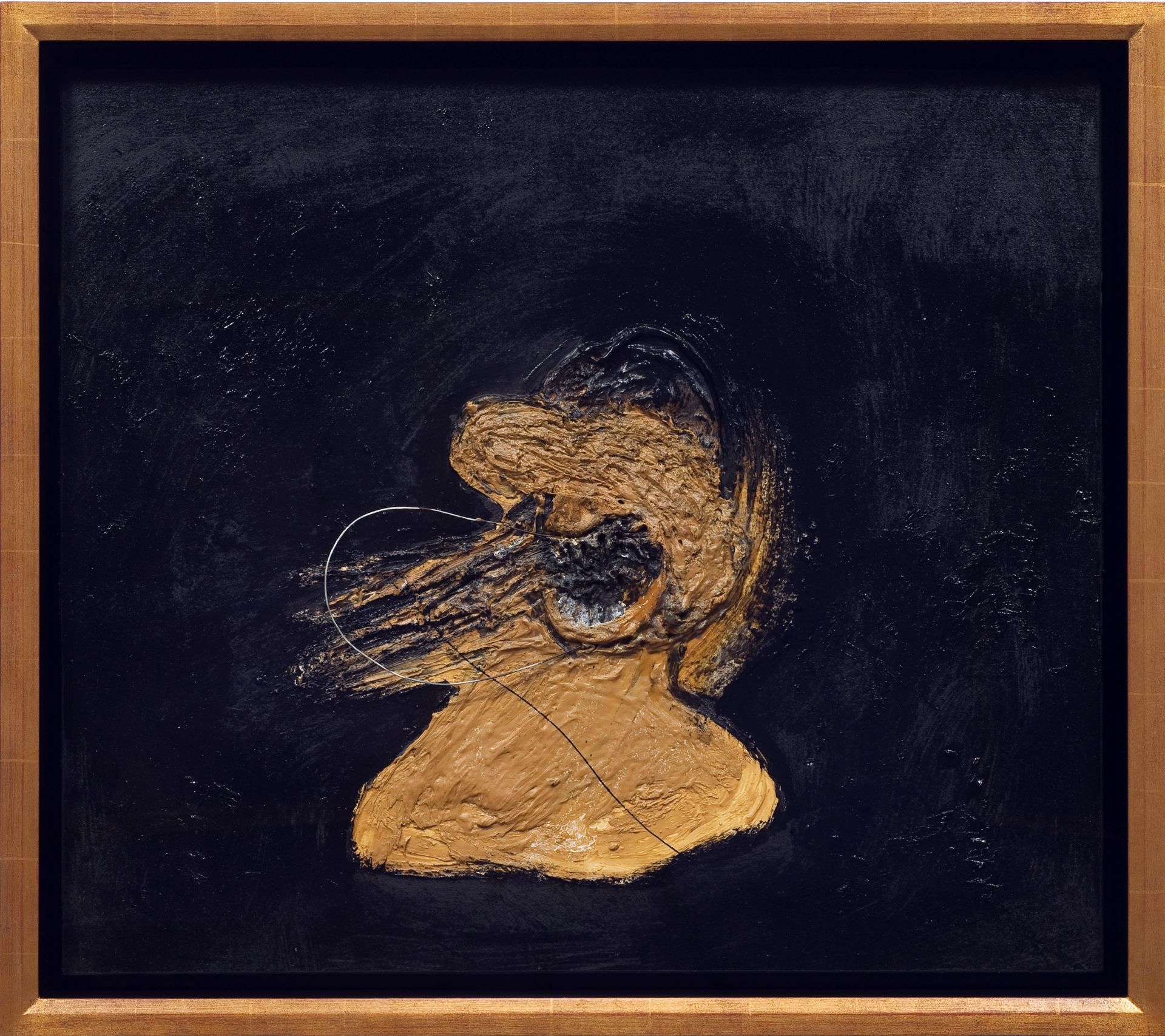 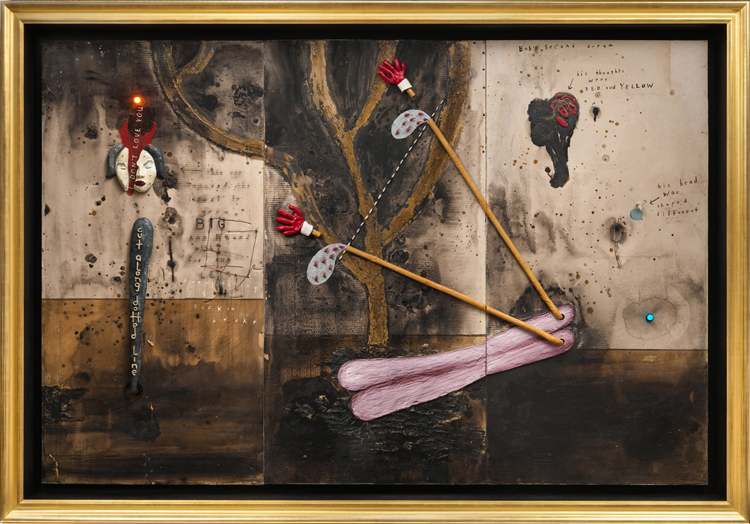 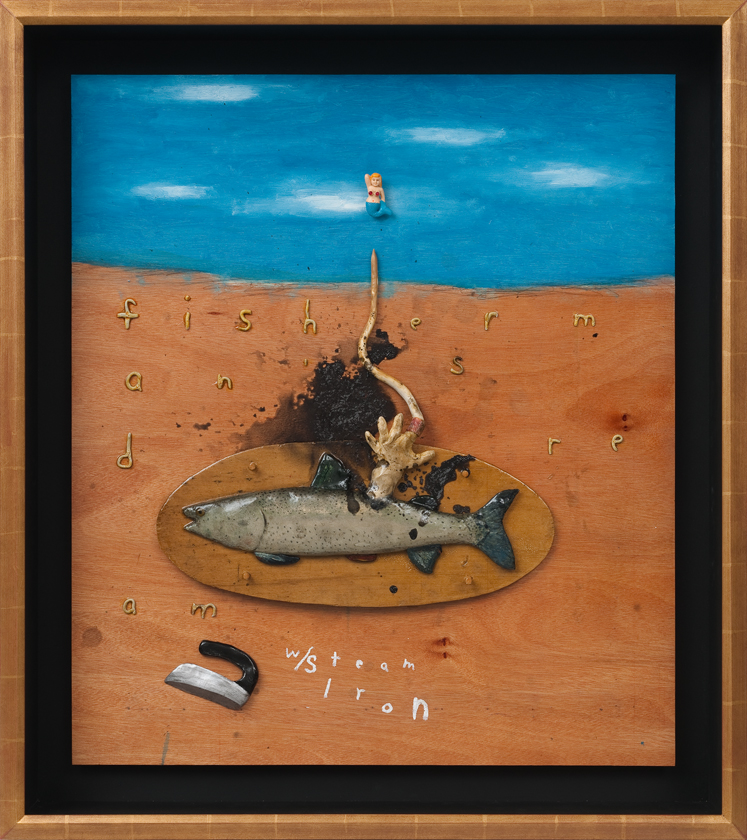 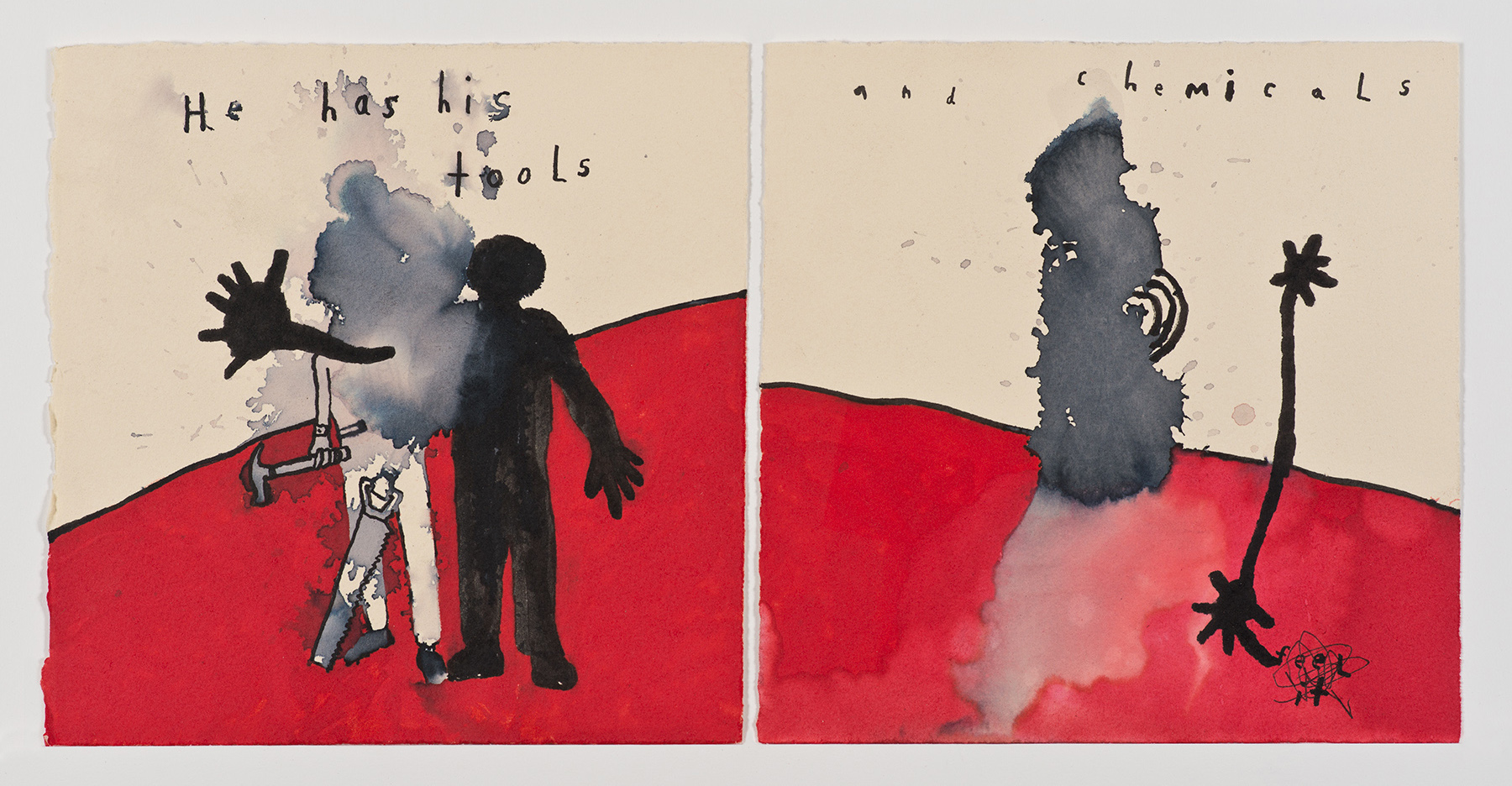 He Has His Tools and His Chemicals, 2013.
Photo Robert Wedemeyer, Courtesy of the artist and Kayne Griffin Corcoran, Los Angeles
Advertisement 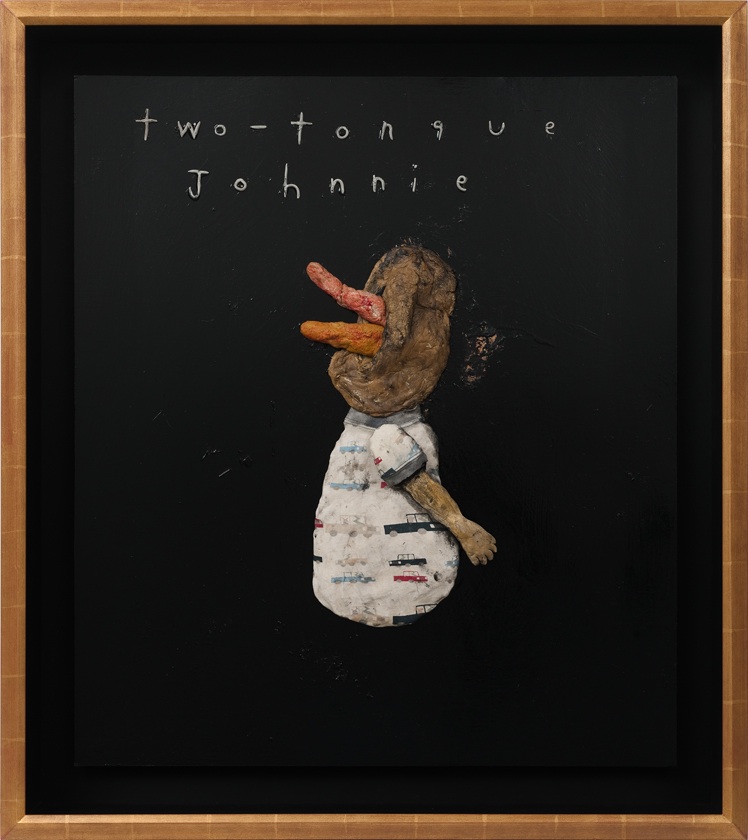 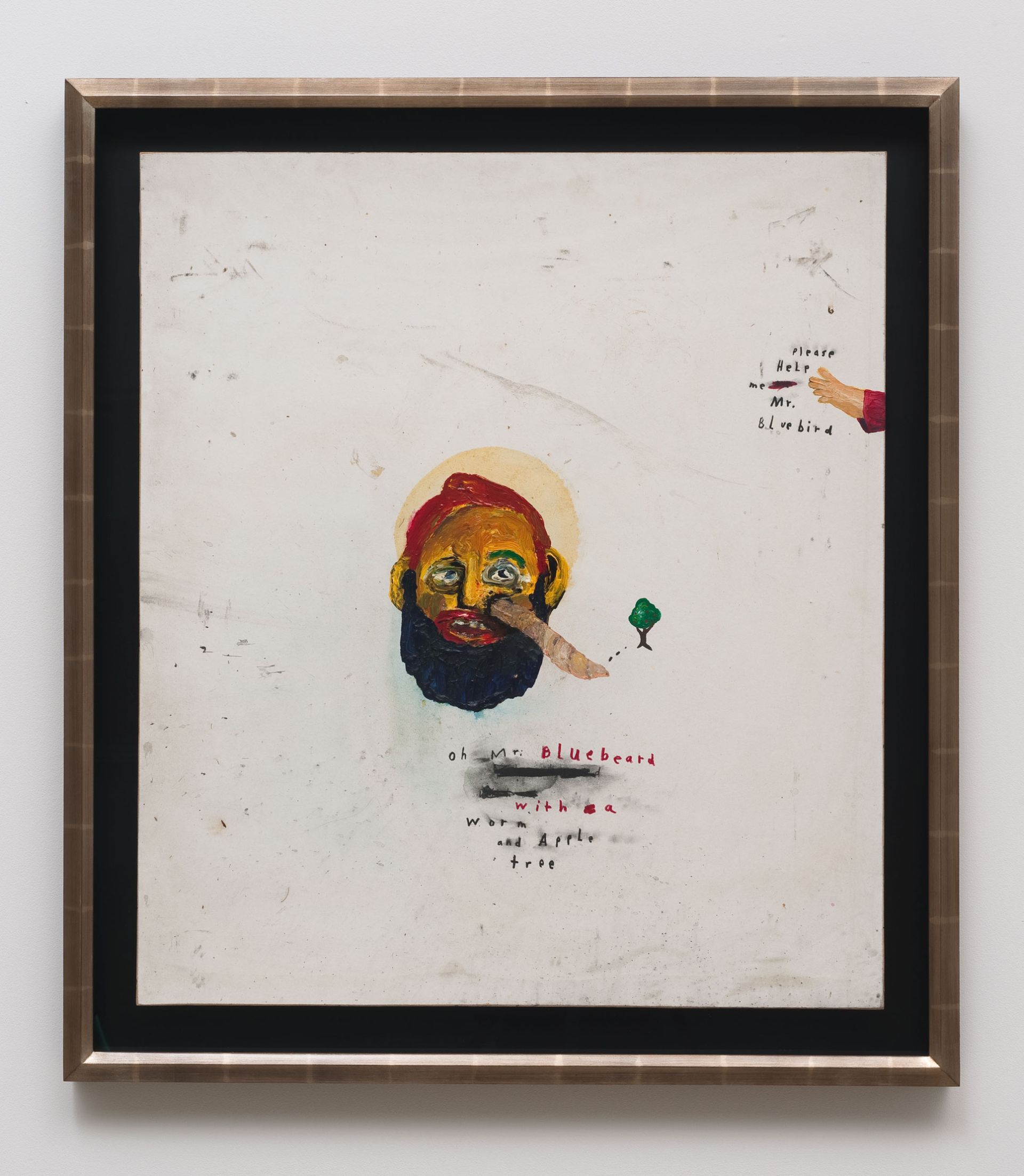 Oh No Mr. Bluebeard With A Worm And Apple Tree, 2013.
Photo Robert Wedemeyer, Courtesy of the artist and Kayne Griffin Corcoran, Los Angeles 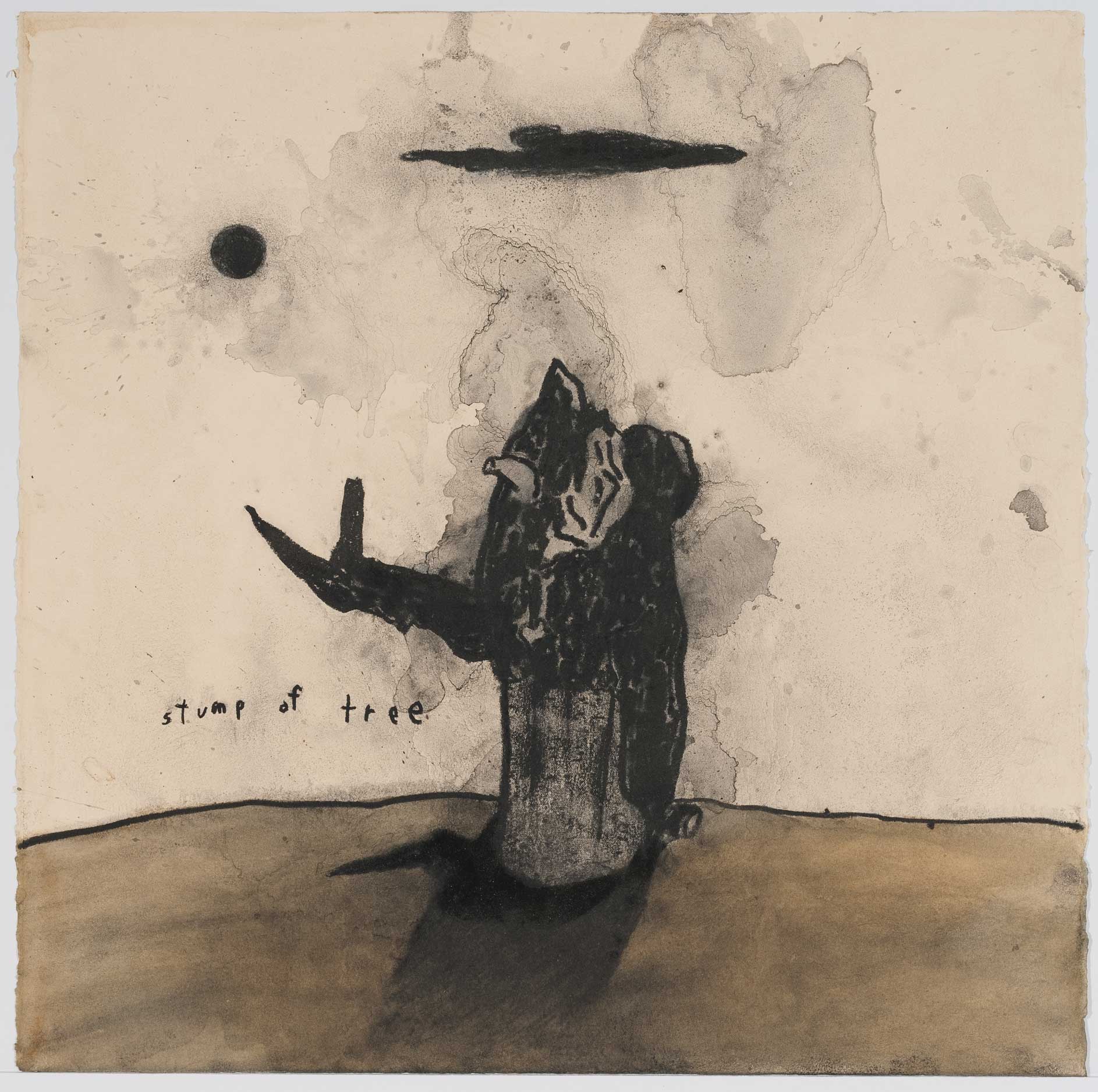 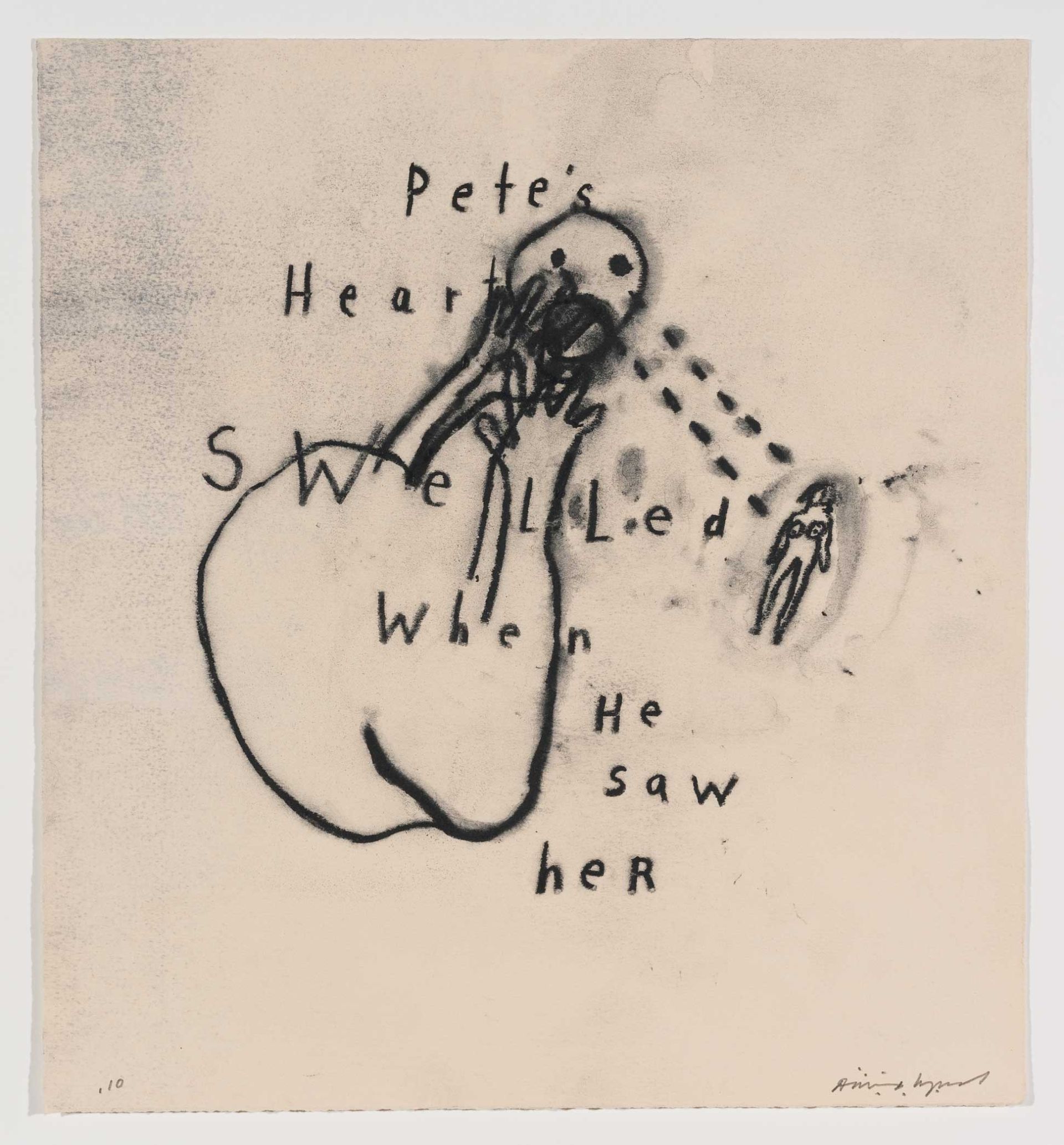 Pete's Heart Swelled When He Saw Her, 2010
Photo Robert Wedemeyer, Courtesy of the artist and Kayne Griffin Corcoran, Los Angeles 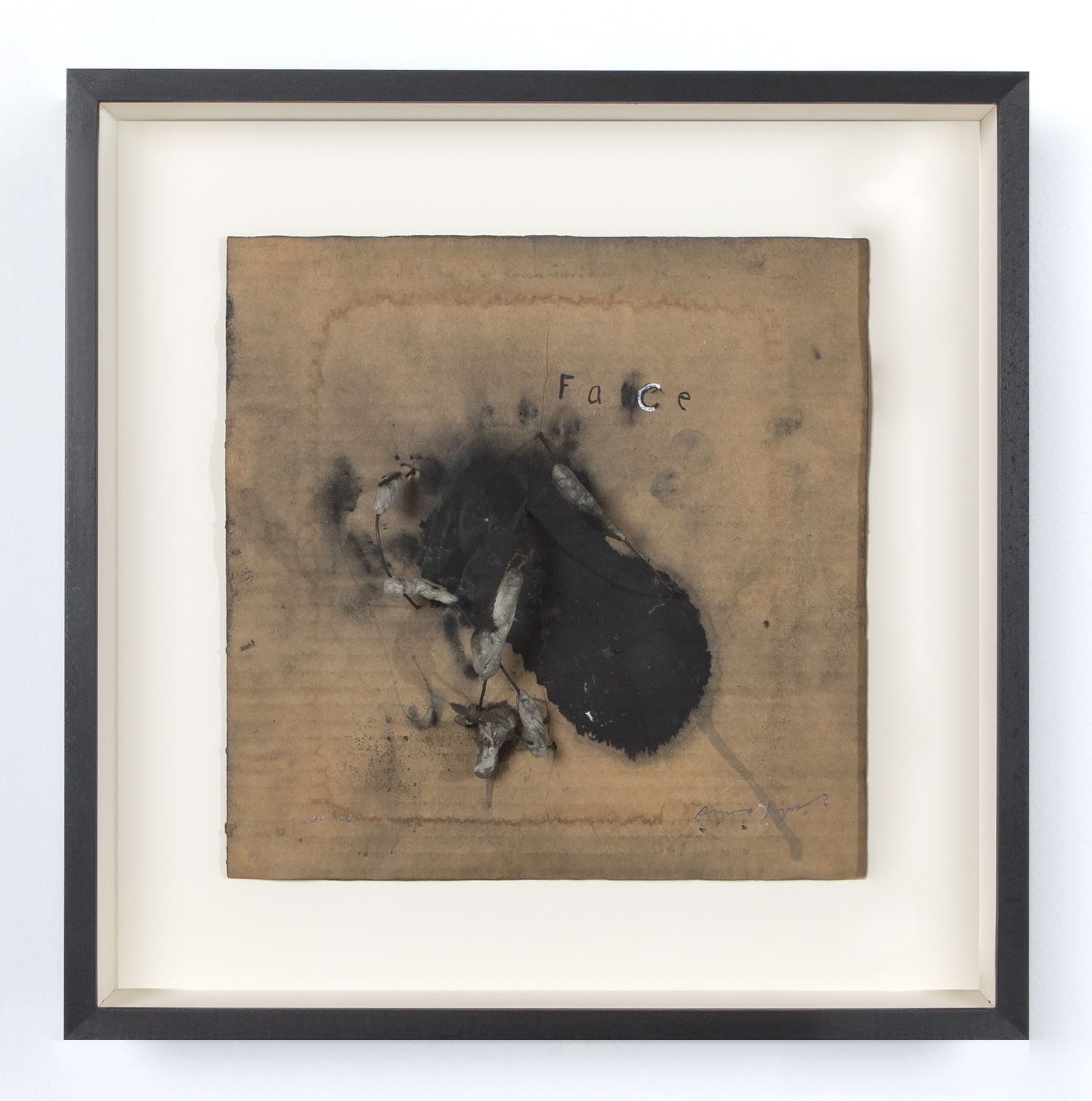 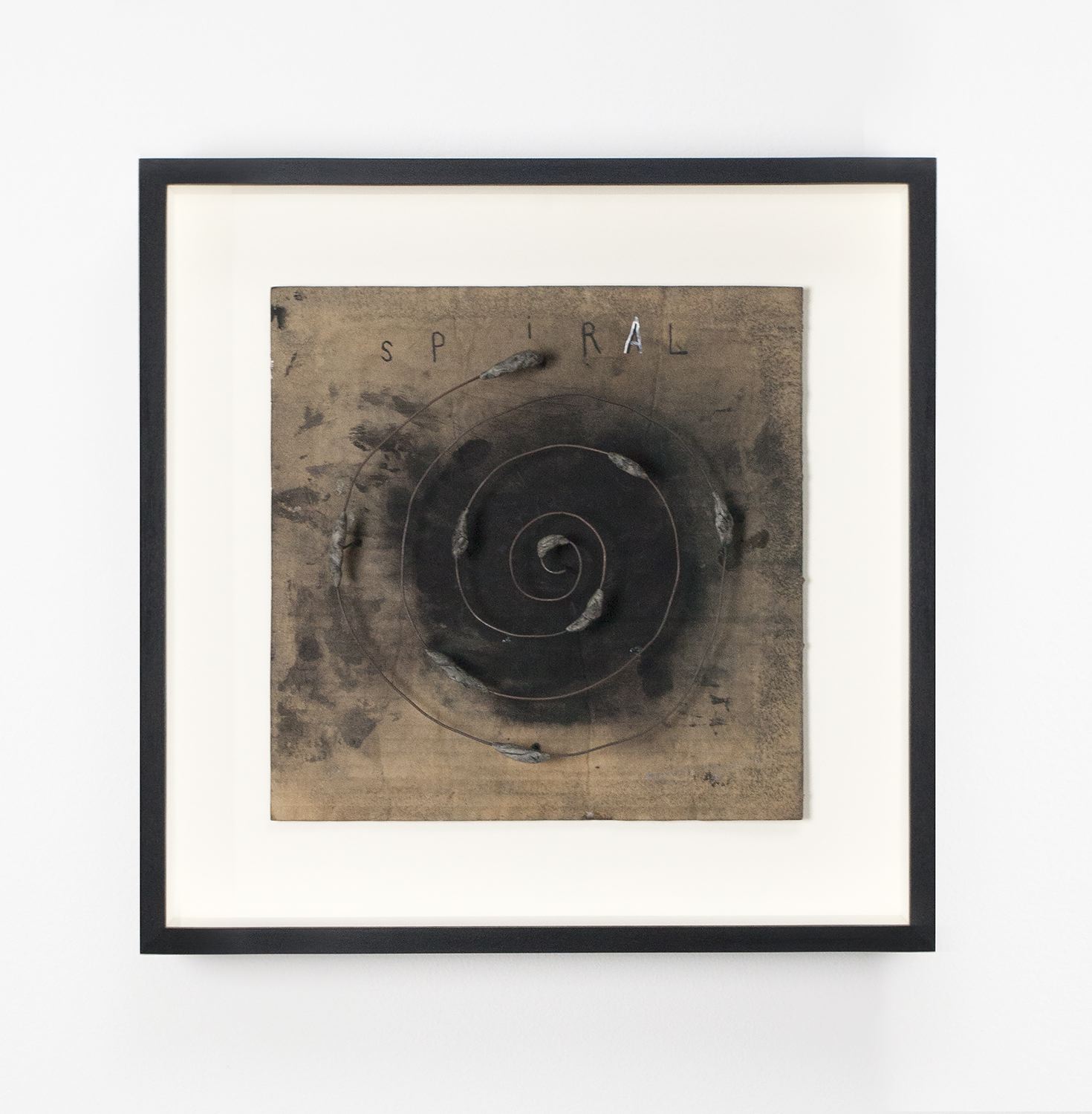 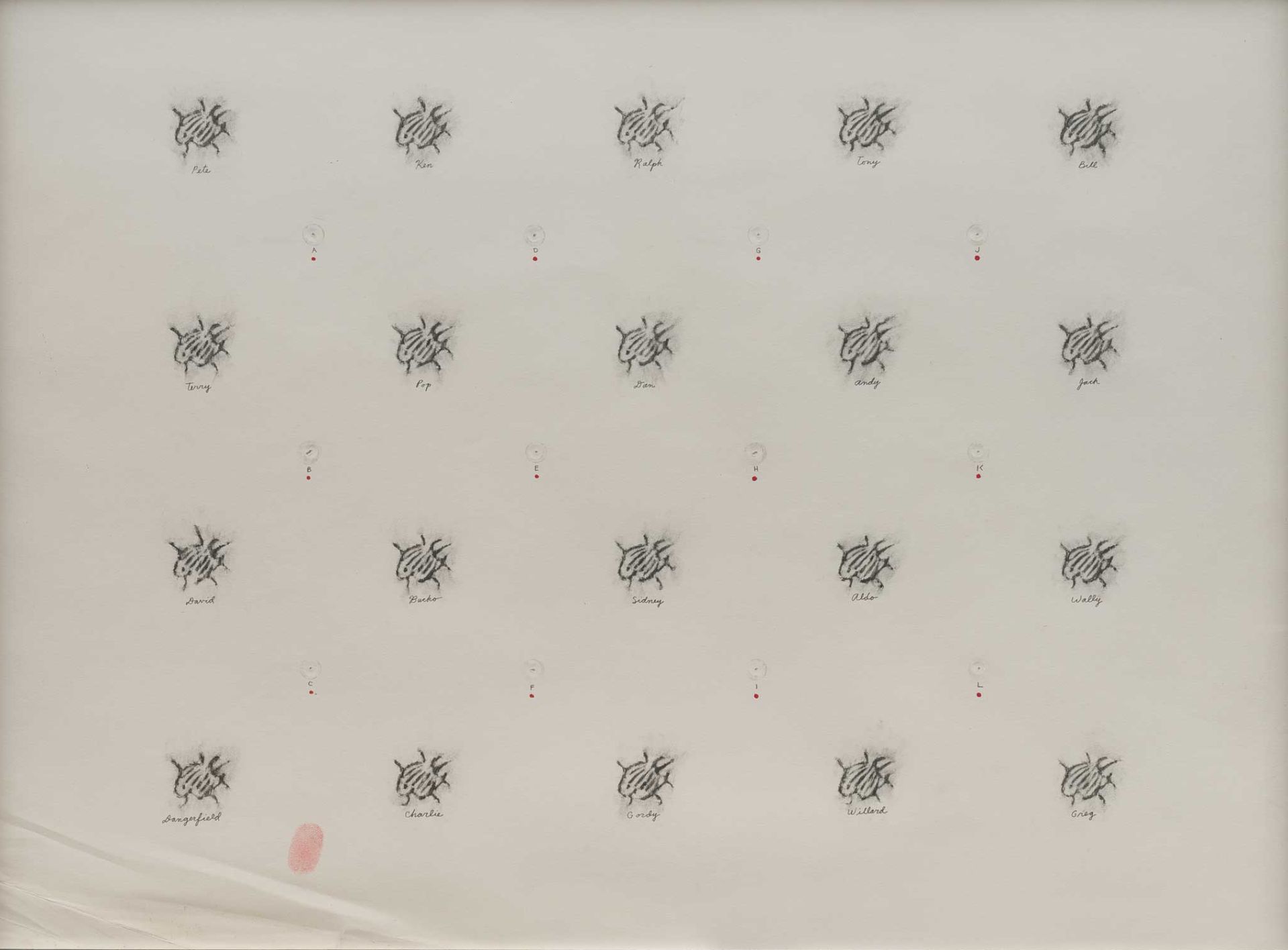 Untitled (from a "Ricky Board"), 1980s.
Photo Robert Wedemeyer, Courtesy of the artist and Kayne Griffin Corcoran, Los Angeles 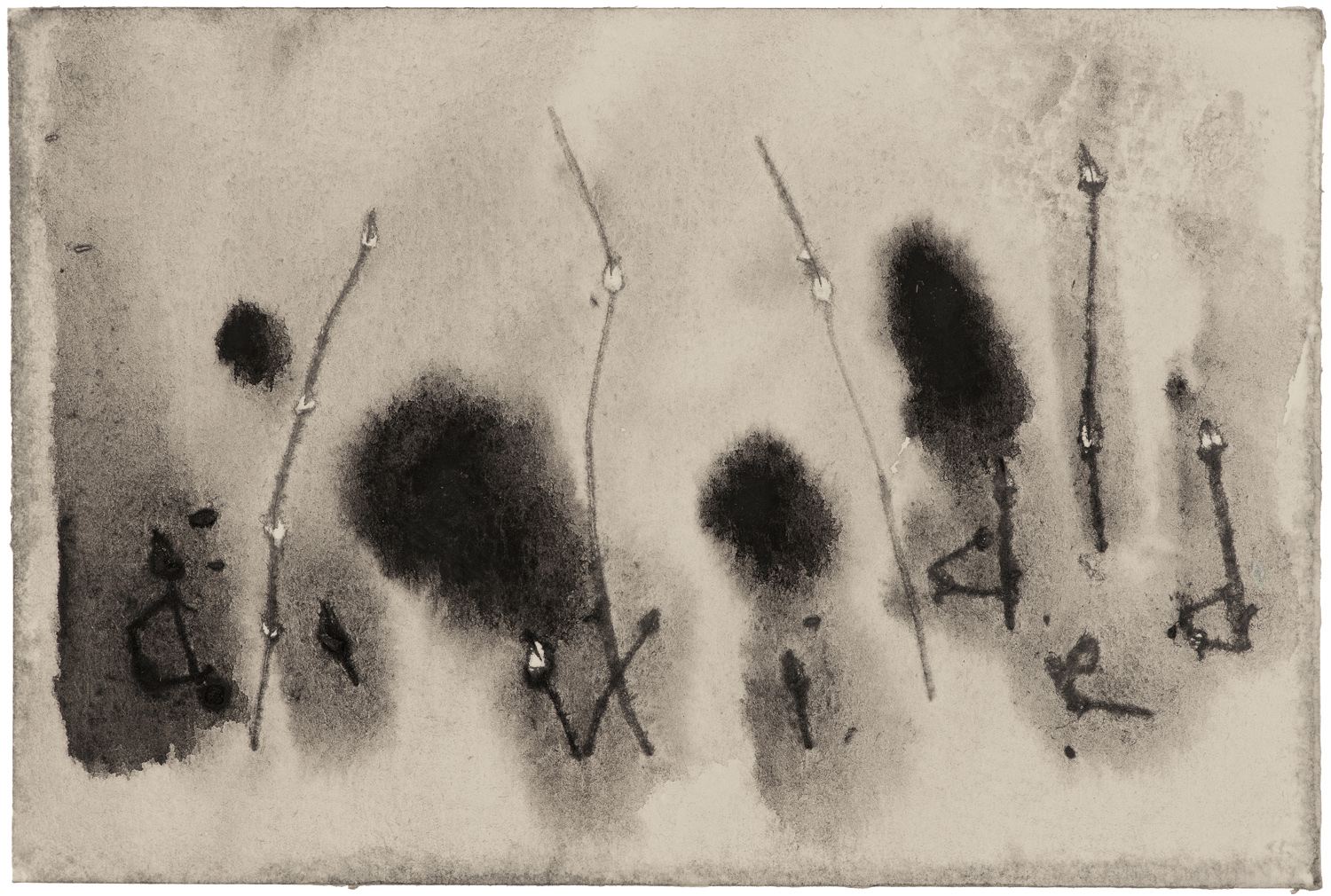 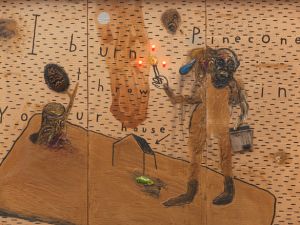 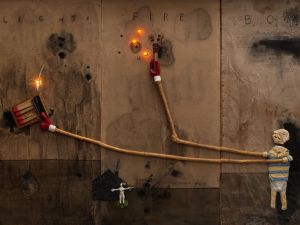 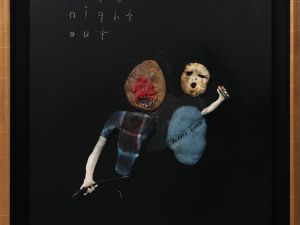 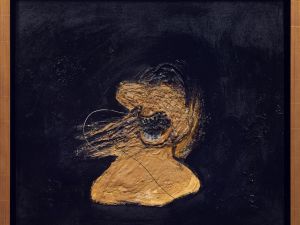 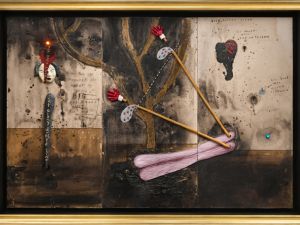 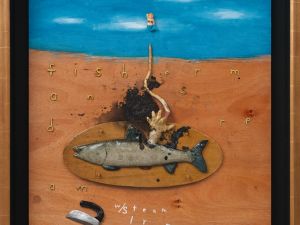 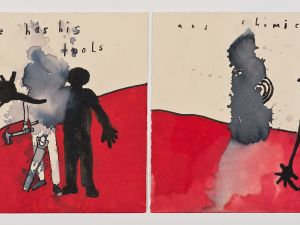 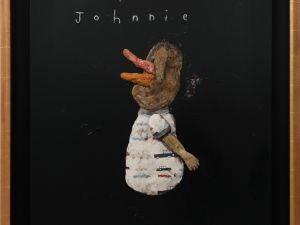 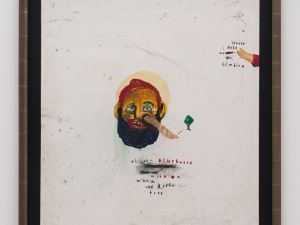 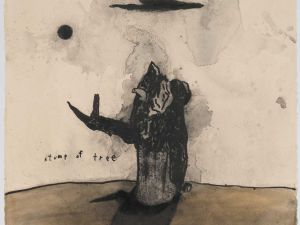 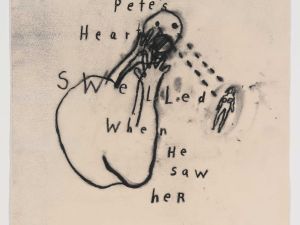 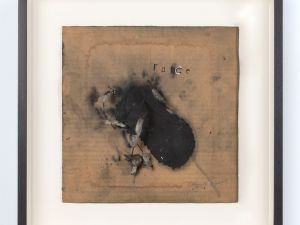 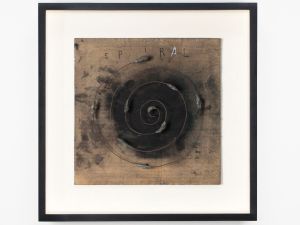 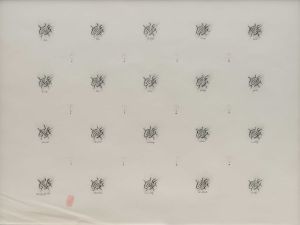 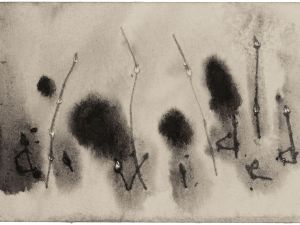 You probably know David Lynch from his films Blue Velvet, Eraserhead and Mulholland Drive, and the cult TV phenomenon he created called Twin Peaks, which is about to return after 25 years with all new episodes on May 21. But while Lynch may be famous for his incredible contributions to filmmaking, his art world beginnings and continued output have remained lesser known. Most recently, Lynch has been hard at work on rebooting Twin Peaks for Showtime under a cloak of secrecy, all the while releasing his own music and founding festivals for transcendental meditation. But he’s still managed to find time to continue painting in the studio, a creative practice that has remained a constant endeavor since he attended Philadelphia’s Pennsylvania Academy of the Fine Arts as an art student in his youth, and where the seeds that eventually would become Eraserhead first sprouted.

In 2012, Lynch’s New York gallery Tilton (helmed by the recently deceased venerable dealer Jack Tilton) mounted the director’s first solo exhibition of fine art in the city since 1989. The show featured paintings, drawings, photographs and a series of multi-media works meticulously inlaid with colored lights, which featured cryptic text. The work Boy’s Night Out depicts what appears to be a violent encounter between two characters, one holding a knife and gritting sharpened teeth splattered with blood (or simply red paint, depending on your take) and the other holding a battery and clad in a blue garment embroidered with the words “daddy’s home.” The image, set against a deep black backdrop, is accompanied simply by the title, scrawled in lower case white letters. Sound like a scene from a Lynch film yet?

Lynch fans lined up around the block on Manhattan’s Upper East Side to attend the opening reception—as did I—for which the director was present, albeit briefly. And just as he is wont to do whenever he finds himself questioned about the significance of his films, he’s been just as reticent to explain to media the significance of his art, however it is widely known that he’s a big fan of Francis Bacon.

In a 2012 interview for Purple Magazine, artist Alex Israel asked Lynch if the figures in his paintings “that have very long arms also express longing, striving, and reaching?” Lynch replied: “Yeah. It’s nice that you say that. There’s a watercolor called Man Reaching, and some lithographs, Reaching out for Nothing, Reaching Out, and Reaching. I don’t really think about things so precisely, but ideas come. Ideas are interesting to think about in terms of what makes them come along, and, in my case, in terms of what makes me fall in love with certain ideas and not others….”

Since his 2012 show at Tilton, Lynch’s artworks have been shows at Kayne Griffin Corcoran in Los Angeles, his alma mater the Pennsylvania Academy of Fine Arts (which hosted his first U.S. museum retrospective) and the Queensland Art Gallery in Brisbane. And now, finally, thanks to a documentary from Jon Nguyen, Rick Barnes and Olivia Neergaard-Holm called David Lynch: The Art Life, the director’s studio practice has made its big screen debut. But don’t expect the intimate screen time with Lynch in his studio to shed much more light on the themes in artwork or his movies. “I think every time you do something like a painting, or whatever, you go with ideas,” Lynch says in the film’s voiceover, according to Vogue. “And sometimes the past can conjure those ideas, and color those ideas. Even if they’re new ideas, the past colors them.”

Lynch may yet provide the academic explanation for his imagery that his fans so desperately crave, and he certainly won’t tell you if his drawings contain Twin Peaks spoilers (you’ll have to look closely yourself) but one thing is clear: he remains as devoted as ever to making art, and he’s a master at any medium he chooses.

Flip through the slideshow for a refresher on the artist and filmmaker’s many paintings and drawings. And check out the trailer for David Lynch: The Art Life below.