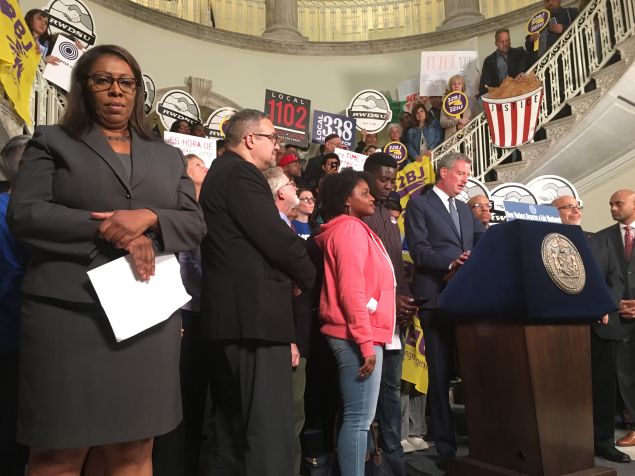 Public Advocate Letitia James called on elected officials, unions and workers to “rise up” and fight back against regulations being developed by the New York State Department of Labor that she claimed would “weaken” a package of “Fair Work Week” bills that city signed into law today for fast food and retail employees.

The New York Daily News reported that the state Labor Department in the process of setting up new regulations that would overrule the package of bills the City Council and Mayor Bill de Blasio passed today to ensure predictable schedules and regular paychecks for service sector workers. Gov. Andrew Cuomo’s regulations—which are in the process of being developed—will be stronger than the Council bills in some cases but weaker in other instances, the News said.

She told the members of Fast Food Forward, 32BJ SEIU, the Retail, Wholesale and Department Store Union and the Retail Action Project—which pushed the legislation locally— in the audeince that they have “gotta stand and step up and state your declaration and commitment to working people in this city of New York.”

The governor’s office insisted to the Observer that its new standards would only improve upon those the city formalized today, even as it refused to part with any specifics.

“We agree that protections are needed—for all industries—which is why the governor’s Exploited Workers Task Force is crafting much more expansive regulations,” said spokesman Rich Azzopardi. “They’ve been engaging with stakeholders throughout this process and, draft regulations will be completed soon and made available for public comment. Until this work is completed, all talk is speculative and ill-informed.‎”

Cuomo’s rules would apply to all minimum wage workers—in contrast with the city legislation that specifically focuses on fast food and retail workers—and would mandate employers compensate workers who show up on the job only to be told to go home, according to the News. But unlike the city codes, they would not require that companies increase shifts for current workers before hiring new ones, nor would they eliminate “on-call” status for workers not yet informed of their schedule.

The fast food scheduling-related bills, announced in part by the mayor last fall, would require fast food employers to give written notice of schedules to their employees a minimum of two weeks in advance, written “good faith” approximations of weekly hours to new employees, manage the practice of “clopenings”—consecutive closing, then reopening, of shifts.

If an employer makes changes to an employee’s schedule with less than 14 days’ notice, the employer will have to pay the employee a premium.

An additional fast food-industry bill requires employers to deduct and send voluntary contributions to nonprofits when their employees make the request in writing, if the recipient nonprofits meet requirements.

Queens Councilman I. Daneek Miller, chairman of the Committee on Civil Service and Labor, echoed similar sentiments. He also referred to the 1,800 striking employees of Charter Communications who are represented by the International Brotherhood of Electrical Workers Local 3.

“I would be remiss if I did not add what is going in Albany has to reflect this,” said Miller. “But more importantly if I did not add that we have 1,800 workers that have been out on strike for 11 weeks that are upstairs now with a corporation where we talk about putting corporate greed above workers, where the CEO earned $99 million last year.”

Mayor Bill de Blasio said that the legislation will address the issue of workers facing retaliation if they do not show up, losing “the opportunity for work ahead” or turning down “the only additional money you’ll see that week.”

“It creates really more than a Catch-22,” de Blasio said. “It creates an unlivable life. It’s 2017, in the richest city, in the richest country in the world and yet it harkens back many decades—the notion that these workers are being treated just like cogs in the machine, rather than being given their human dignity.”

He said he could not fathom that it got to this point, noting that multinational corporations run the fast food restaurants and “make a huge amount of money.”

Cuomo has stepped in to override city policy before: most recently, to block a measure requiring city retailers to charge consumers an extra five cents for paper and plastic bags. 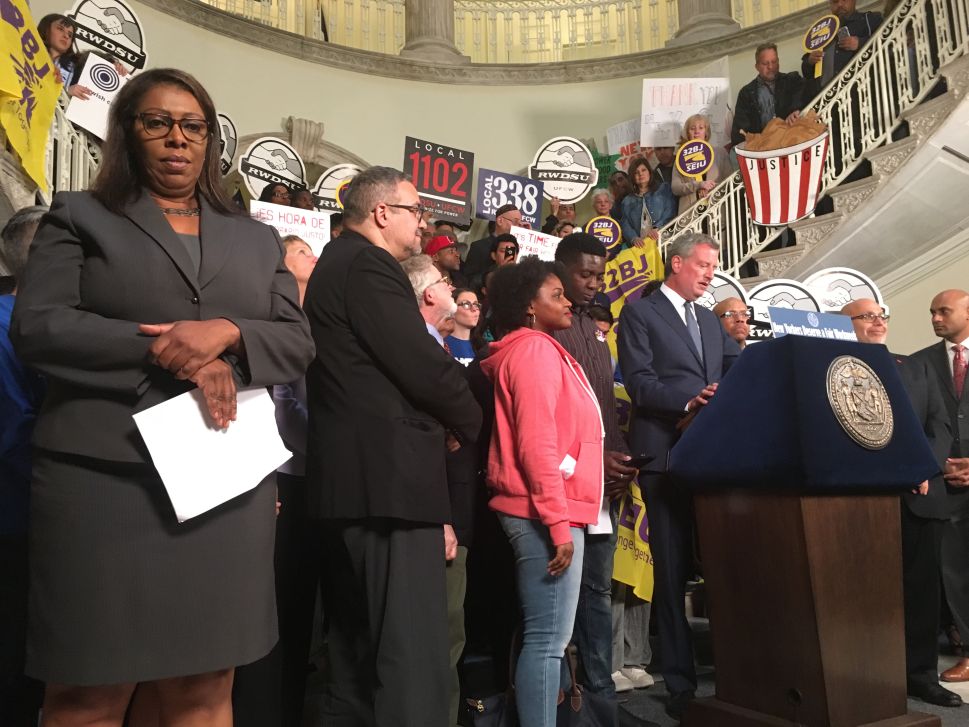