Joseph Ponte, the embattled commissioner of the city’s jail system, fingered two former Department of Correction employees from ex-Mayor Michael Bloomberg’s tenure as the figures who incorrectly informed him and other agency brass that they could use city vehicles for personal trips—even though both denied ever giving him such dubious advice.

A blistering Department of Investigation report revealed last week that Ponte had taken one of his government-issued sports utility vehicles on numerous excursions to his former home in Maine, and used his city gas card to fuel up, and that several of his subordinates had made similar rambles in their municipal automobiles. Mayor Bill de Blasio claimed that the commissioner and his associates had received official advice that such jaunts are permissible—earning the liberal Democrat a swift slapdown from DOI Commissioner Mark Peters, who said his investigation had found nobody had given the commissioner and his staff such guidance. Ponte and his entourage shoved past reporters in silence both while entering and exiting the hearing of the City Council he testified at this afternoon.

The commissioner was similarly reticent when Queens Councilman Rory Lancman asked for the names of the individuals who had told him he could take his city-owned SUV roving through the New England countryside.

Lancman cut him off with a sharp rebuke.

“Maybe you’re not aware of the way this works. This is the City Council. We ask you questions, you’re under oath. It’s not for you, sir, to decide what serves a purpose or doesn’t serve a purpose,” the councilman said. “So I’m going to ask you again: what are the identities of the people who provided you the guidance that the mayor referred to?”

Ponte demurred a few moments more before naming former chief-of-staff Sara Taylor and former first Deputy Commissioner Mark Cranston, both of whom exited the agency amid a general turnover in 2014. Contacted for comment, both told the Observer they had never advised the commissioner he could use his publicly-owned, taxpayer-gassed auto in any way he pleased.

“I never advised Commissioner Ponte that it is permissible to take a city-owned car out of state for personal purposes,” Taylor wrote in an email to the Observer.

Cranston issued a similar denial via Twitter direct message—but suggested that the special permission he obtained to reside in and travel back and forth from New Jersey may have confused the incoming commissioner three years ago.

“Let me be clear, at no time did I have a conversation with Joe Ponte telling him he was allowed to use any city owned vehicle contrary to existing departmental policy,” said Cranston, now a warden for the Middlesex County Department of Correction. “As first deputy commissioner, under the Bloomberg administration, I applied for and was granted a residency waiver to live and commute to New Jersey which was in effect when I transitioned out of the agency. Perhaps Joe confused this as permission for his own out of state travels.”

Blaming Bloomberg’s people and policies for the myriad scandals and snafus that have plagued the present administration is a favorite tactic of de Blasio himself, even nearly halfway through his fourth year in office.

In his testimony, Ponte said it was the policies surrounding his security detail that confused him: that, since he is entitled to a driver, a vehicle and a personal protective retinue at all times, he believed he could make use of the car in the absence of the other two. Aides to the mayor stressed after the hearing stressed that all of Ponte’s personal trips in the SUV would have been permitted had he brought his escort with him.

The hearing followed fast behind another bitter skirmish between the Department of Correction and the Department of Investigation. Peters announced this morning that Deputy Commissioner Gregory Kuczinski had used his agency’s telephone surveillance technology to listen in on conversations between DOI investigators and inmate informants.

The de Blasio administration announced it had suspended Kuczinski pending an investigation. Ponte and his fellow Correction leaders maintained that any spying was accidental, terminated quickly and only brought to the commissioner’s attention after it was over. 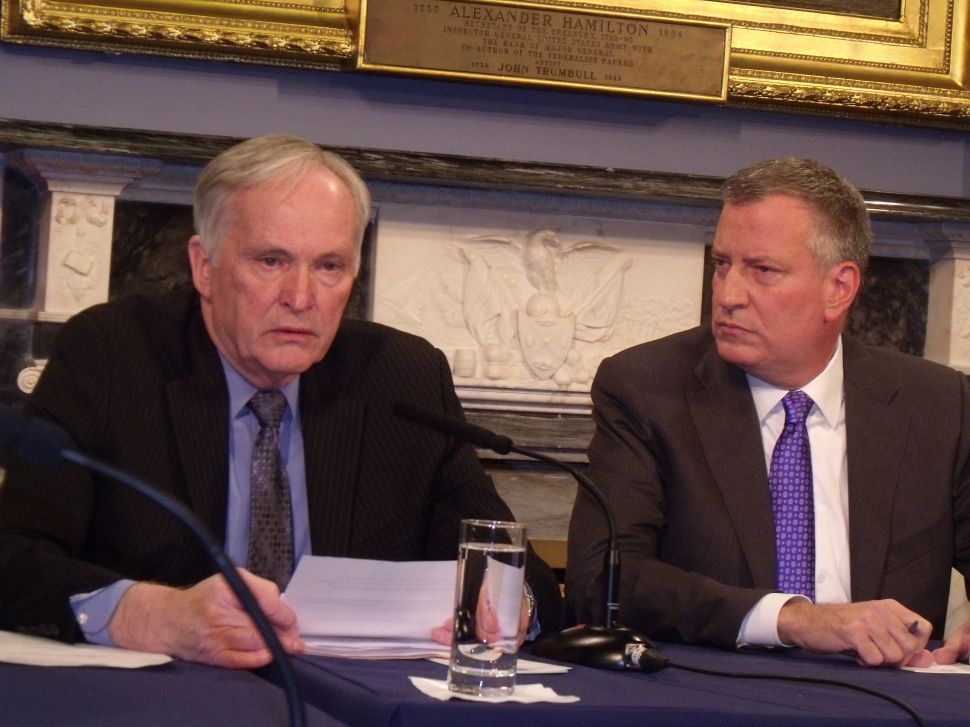