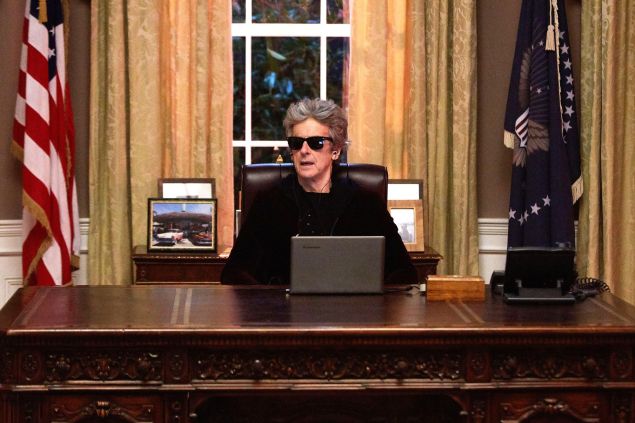 If there’s one thing that Doctor Who does better than almost any other show, it is navigating a constantly shifting narrative. Very often we’ll start out an episode thinking we’re watching one kind of story, only to realize we’re actually watching a very different sort of tale. A door suddenly opens in the floor and a domestic drama gives way to an adventure, or a sci-fi parable to a romance, etc.

When this is done well, it’s electrifying, subverting our expectations in the most satisfying way, linking the riddles the Doctor must solve to the plot that we as viewers must unravel. And this is the case with “Extremis,” a marvelous piece of narrative legerdemain that manages to slip from religion to sci-fi to existentialism and back again, all interspersed with a separate framing tale about morality and fear and friendship.

Let’s begin with that framing story, as it is simpler and connects the episode to the season’s larger arc. We finally find out who is in the vault the Doctor has been guarding all this time—it’s Missy. Talk about subverting expectations: After the brief glimpse of Michelle Gomez we were given in the teaser for this week’s episode, I imagined she’d be revealed at the end, as the story’s big bad. But here she is, right at the start, being marched to her execution.

The Doctor’s been brought to a planet that appears to be entirely dedicated to carrying out executions of condemned prisoners who, like Time Lords, who are difficult to kill. After briefly letting us believe it’s the Doctor who is going to be destroyed by a machine designed to disrupt both of his hearts, all three of his brainstems, and his capacity for regeneration, we are told that he’s actually there as the executioner, because only a Time Lord is able to carry out the sentence.

It seems her many lifetimes of evil deeds have finally caught up with Missy/the Master. But before the Doctor can pull the lever, he’s visited by a priest, who turns out to be Nardole on a mission from the recently deceased River Song.

And thus in a very quick sequence of scenes, a lot of the major riddles of the season are answered: How the Doctor got from his 24-year night on Darillium to his extended lectureship at the university. How Nardole became his valet. Who is in the vault, and why the Doctor took an oath to guard it. The vault is actually called a quantum fold chamber, and it is supposed to be able to hold the body of a Time Lord in a way that makes certain they do not spontaneously regenerate. (Of course Missy is not dead, which probably explains why they are constantly down there fiddling with the vault doors?)

Fake priest Nardole reads from River’s diary, in which she explains that what she loves about the Doctor is that his goodness remains good even when most people throw morality out: “without hope, without witness, without reward.” And in the same way, Missy, without any hope of reprieve, makes it her last wish that the Doctor should know she thinks of him as a friend.

So he takes River’s advice and doesn’t go through with it. He fakes the execution, taking the oath to guard her body for 1,000 years, and then gooses the riddle: Nobody ever said the body had to be a dead one! And that’s how we ended up with a very, very long sojourn at Unnamed London University.

This story of death and faith is embedded in and around the main story of the episode; they’re barely connected narratively, but rather form a sort of counterpoint that spins around the question of moral action at the very limits of one’s existence.

So in the present, the Doctor—still blind and trying to fake his way through life with the help of his sonic sunglasses and Nardole’s comically unsubtle hints about stuff that’s right in front of him—gets a visit from the pope. Which the Doctor, after making his usual snarky comments about religion, realizes is totally not how things are supposed to work, and that things must thus be very bad indeed.

The Vatican is in possession of a manuscript known as the Veritas, the contents of which are unknown, since those who knew its language all committed mass suicide. Now it’s finally been translated by the Church’s best scholars—who all also killed themselves after they read it. (Well, all except one.)

Now the pope wants the Doctor to read it for them and discover the secret, a fun irony for a dude who is trying to pretend he’s not blind. So he rounds up Bill, stopping for some excellent hijinks when her morally and sexually tentative date is scared off by the pope emerging from her bedroom, and they wing it to the “hereticum,” the library of forbidden texts in a sub-basement of the Vatican.

They get there in time to see the one surviving translator email the Veritas text to CERN in Switzerland before committing suicide himself. Oh and there are weird glowing portals in the walls that weird mummy-looking aliens keep climbing out of. So while the Doctor uses a device that was definitely not approved by the American Medical Association to zap some temporary life into his eyes so he can get a glimpse of the manuscript, Bill and Nardole find a sort of portal hub with doors to places like the Pentagon and CERN.

Checking in with the Swiss scientists to find out what happened after they read the Veritas, they find them drinking wine and celebrating the fact that they’re all about to blow themselves up with dynamite. Why? Because this world isn’t real, which they can prove: Just pick any random number and everyone in the room simultaneously picks the same random number, like the world’s scariest magic trick.

Eventually Bill finds the Doctor, who has gone through another portal into the Oval Office. Seems the president has read the Veritas and killed himself too. The Doctor has also read it, having somehow only now discovered text-to-speech technology, and he finally knows what is going on: None of them are real. The entire world and all the people in it are a simulation, created by an advanced alien race to try to discover the secrets that will let them successfully invade the real Earth. Concentrating their attention on the centers of power, knowledge, and influence: the Vatican, the White House, the Pentagon, CERN.

The Veritas was written by a community that figured out this fundamental fact millennia ago, and devised a simple test: try to think of random numbers. Computers can’t simulate randomness, and so every fake human in this fake world, all being part of the same computer program, will all come up with the same numbers. When the priests and the scientists and the president try this test and realize they are not real, they do the one thing they can do to resist—they commit suicide, depriving their makers of the information their existences would have provided.

But of course this means that Bill isn’t real either. And neither is the Doctor, who has also performed the number test. He’s just a simulation, and should also remove himself from the playing field like the others.

Then, there at the very end, without hope, he remembers River’s words, and he suddenly sees it. That he has been mistakenly thinking this is a story about an alien invasion, but this is actually a story about faith.

The Doctor has always been a skeptic about all kinds of religion, but now that he himself is only an idea, someone who does not exist, he starts to see the power in believing in such an idea. A nonexistent notion of a person can affect the world in profound ways. And so instead of just dying, he reaches out from inside nonexistence to touch himself in the real world. How? By emailing, of course.

The sonic sunglasses have been making a recording of what he has been looking at this whole time. Which he uploads as an email attachment, sending it out of the simulation and to the real Doctor, who has just been sitting blind outside of Missy’s cell all this time. In fact, the whole episode was not these events actually happening, but the Doctor watching them in a replay of the recording on his glasses. And now he knows, and is ready to mobilize his troops—including, possibly, Missy?—for the coming invasion. 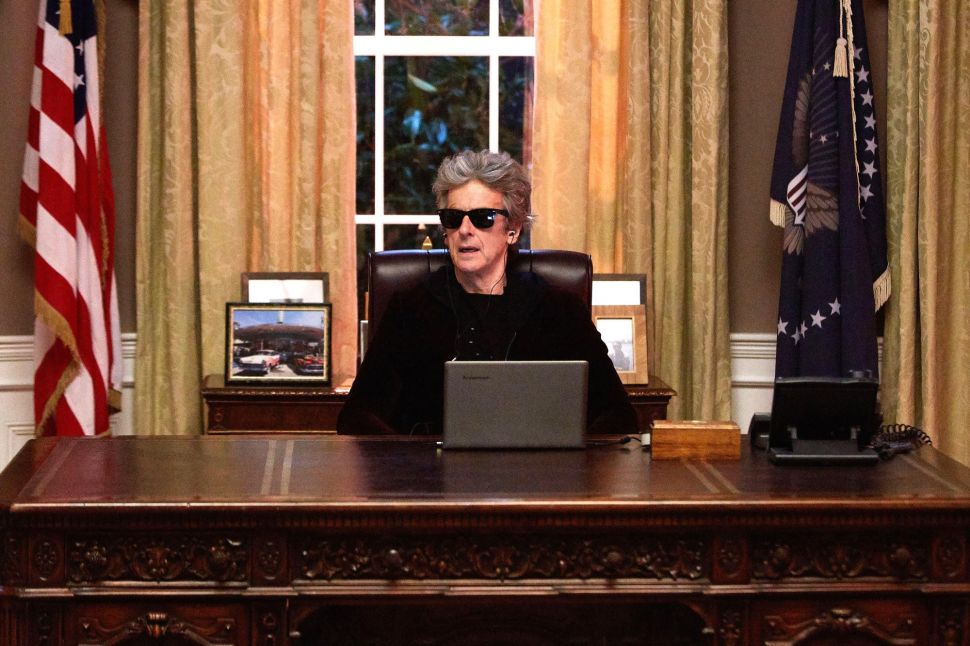