I think it’s about time to call it: This season of Doctor Who is shaping up to be a real yawn. Sure, it’s decently well-written and -acted, Bill is a perfectly charming new companion, and Capaldi continues to bring his interesting spin on the character. But in many ways season 10 seems to be just going through the motions, with too little of the layered complexity and oddness that make the show fun and rewarding.

This seems due to the fact that this season seems to want to act as an introduction to the show to new viewers without alienating old ones. So instead of building on what has come before, using Doctor Who’s decades of continuity in significant ways (which could alienate or confuse newbies), it is instead simply mining those older stories, recapitulating elements of them in new, unrelated tales. The hope seems to be that this will serve as a good entry point for the novice, while the veteran viewer can enjoy a fun game of “spot the reference.”

But that’s dumb. And boring. Also, it’s not working. Instead of cheekily familiar, these recycled stories just feel a whole lot of been-there-done-that. And the Doctor seems off his game, sort of vague and dull, because he keeps acting as if these are new, unique challenges, when really he has solved similar riddles quite recently. A house with hidden secrets that isn’t really entirely a house? Oh, kinda like “The Lodger”? A woman made of sentient wood? So exactly like “The Doctor, the Widow, and the Wardrobe”? People trapped in a confined space, being picked off one by one? Like literally dozens of previous episodes? The lack of originality is becoming as stifling as the air inside that moon base/space station/haunted house/confession dial/what have you.

This time around it’s a haunted mansion, courtesy of a super creepy landlord who agrees to rent it out to Bill and her five friends. Actually, only one of them is Bill’s friend—she gets set up with the rest so they can look for housing together. Which leads me to wonder: Is it somehow easiest to find a good place to live in London as a group of six? I mean, sure, more people may be a good way to save on rent, but is six like the standard number of bedrooms for a London apartment, so much that it made sense for Bill to have to seek out relative strangers to live with?

Or maybe they’re just college students who didn’t really think things through. The rental agent basically shows them a bunch of tiny unlivable spaces anyway. They’re about to give up when this elderly man offers to take them to see the huge mansion he’s renting out. And they’re just like yay, we lucked out, instead of saying, hey what’s the catch dude? You’re offering us a palace even though our price range was apparently more like six mattresses on the floor of a storage unit?

If I’ve learned anything after two decades living in New York it is that any housing deal that seems too good to be true is definitely too good to be true. Once I found a $300 room in a two bedroom near Lincoln Center, only to discover I’d be living with a shut-in whose eyes were too sensitive to ever open the window shades and who collected his excrement in Mason jars. (And I still considered it!)

But Bill & co. decline to look this particular gift horse in the mouth, despite their new landlord’s twitchiness, the general creaky weirdness of the house, and the fact that they’d be living under a huge tower that is declared “unsafe” and so off-limits.

Lucky for them, Bill talks the Doctor into letting her use the TARDIS as the world’s most convenient moving service, and once he’s on the scene, he instantly begins noticing that something is off. Trees blowing in the wind when there is no wind, for instance. Bill, horrified that the Doctor is being the Doctor in front of her new friends, doesn’t take the threat seriously and keeps trying to run her “granddad” off. But her flatmates already know him as the hilariously weird lecturer from the university and are happy to have him hang out.

And hang out he does, dancing to bad music off Bill’s phone, pointing out the house’s superficial weirdnesses (it doesn’t have modern outlets, the cupboard is really an elevator, etc.), and slowly uncovering its deeper secrets. Because, of course, the mansion has started eating people.

Turns out the house is infested with (and partially made up of) some alien species of wood lice that needs an infusion of human flesh every 20 years to keep it going. Every couple of decades the landlord lures a new group of impressionable college students to their deaths, in exchange for which the insects have preserved the life of his daughter, once terminally ill, in the form of living, lice-impregnated wood.

The Doctor thinks he’s figured the story out: The landlord brought his dying daughter Eliza some cute insects as a gift, and the next day he realized they were making her better by turning her into wood, so he struck up a deal with the bugs. But Bill, a remarkably quick study as the Doctor’s new pupil, sees the flaws in the story. A) That would make the landlord over 100 years old, and B) why would a man bring his dying daughter some bugs to play with? She realizes this isn’t Eliza’s father—it’s her son, who has been keeping her alive all these years; he aged, and she stayed preserved in wood.

A rather predictable twist, but it gives the Doctor an opening to end all of this: Eliza has been following his lead all this time, but she is the parent, not the child. She can finally tell him enough is enough. No more killing kids so that she might live. She orders the bugs to absorb her and her son instead, and then (surprise!) they spit out the eaten flatmates, all still alive, and they all run out just as the house crumbles to the ground.

Another pet peeve here: The Doctor’s not supposed to be able to save everyone all the time. The great “Everybody lives!” miracles of “The Doctor Dances” and “The Forest of the Dead” only have the impact they do because such a win is rare. Usually the Doctor loses a lot of innocent souls on the way to figuring out just what is killing everyone. But this time their resurrection is treated just as a matter of course, which cheapens the whole thing.

Bill and her friends huff on back to the rental agency, and the Doctor goes down to his vault, where he relieves an increasingly peevish Nardole at watch duty, and then goes inside to visit whoever is imprisoned there. Whatever beast they have trapped, it is able to play “Fur Elise” on the piano, enjoys Mexican food, and doesn’t try to escape when the Doctor opens the door. Seems like not much of a threat, except that it is only interested in the Doctor’s story of the day’s adventures when he mentions it involves dead children, so that might explain all of the locks and safeguards. Seems we won’t find out what’s behind door number one until the end of the season, maybe even the Talalay/Moffatt two-parter that will close it out. 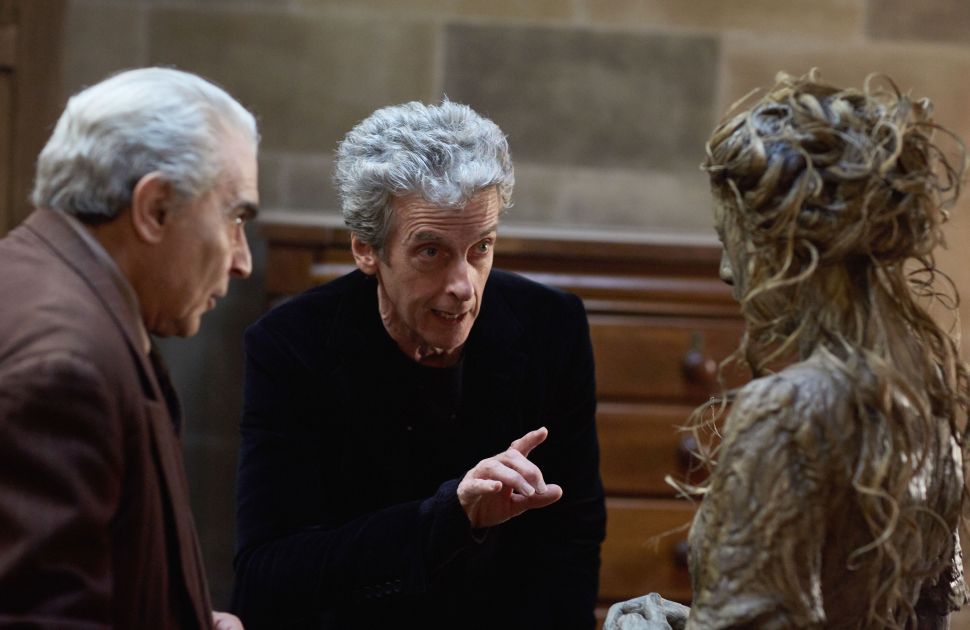