The 48th City Council District, currently held by Democratic Councilman Chaim Deutsch, is a docile semi-suburban slice of southern Brooklyn, cutting into leafy Midwood and stretching to the sandy margins of Brighton Beach.

It has enclaves of affluence, largely by the waterfront, and particularly in Manhattan Beach, the jutting eastern end of the Coney Island peninsula. But the landscape consists mainly of humble row houses and unassuming semi-detached homes and square, utilitarian apartment blocks.

Once, these streets gave rise to a congressman-turned-senator named Charles Schumer—and, later, to a councilman-turned-congressman named Anthony Weiner. But in the fall of 2016, they turned blood-red for Donald Trump.

This may be in part because the area’s single largest reservoir of votes is the vast Trump Village complex in Coney Island—the heart of the outer borough housing empire that belonged to the president’s father. But it has at least as much to do with population shifts.

The 48th District one of the few places in New York City, and in all of America, where demographic change has favored Republicans. The traditional Democratic stock of working-class Italian-Americans and liberal Jews has faded, given way to Eastern Europeans skittish of anything that whiffs of communism and attracted to Trump’s gaudiness, and to religious Jews.

GOP candidate Steve Saperstein, although just 32, belongs to the older population. He grew up in a Reform family, his father a factory worker, his mother a homemaker. In his teenage years, he handed out leaflets for Democratic then-Assemblywoman Adele Cohen, before converting to conservatism while at New York University.

Both of Saperstein’s parents and his younger brother suffer from congenital deafness, which him to a career working with the city Department of Education as a teacher for the hearing-challenged.

“I’ve been an outsider my whole life,” he told the Observer at his campaign kickoff last night, at Wheeler’s Restaurant in Sheepshead Bay. “That’s made me who I am, it’s why I’m running.”

Saperstein praised Trump for his campaign emphasis on infrastructure and job creation, and his destabilization of the political status quo. Still, he seemed hesitant to fully wrap himself in the president’s flag.

“Many of his policies I do support, and I know many of the constituents here do,” he said. “But I’m not Donald Trump. I’m Steve Saperstein.”

“I’m meeting people in the street who are worried that our city is sort of slipping back to the bad old days,” he said. “I will be someone, when I get to City Hall, to vehemently oppose his policies, while at the same time taking care of my constituents and my community.”

There is also a growing likelihood of a divisive primary on the Democratic side. Many observers expect political operative Kalman Yeger, a distant relative of Deutsch’s, to run against him.

Behind Yeger is Councilman David Greenfield, the self-styled Svengali of southern Brooklyn, whose access to deep-pocketed donors and cachet in the ultra-Orthodox community has given him tremendous influence over the official Kings County Democratic Party. Greenfield, who chairs the Council’s powerful Committee on Land Use, is known to have long viewed Deutsch as a rival.

Marat Filler, another Democrat, has also filed to challenge the sitting councilman.

Saperstein would not comment on the fight for the opposing ballot line, other than to acknowledge that it could only play in his favor. Still, it remains unclear whether the Republican contender can recreate Trump’s successes in the district.

Despite their conservative inclinations, the religious Jewish population has one of their own in Deutsch. And the most influential Russian power-brokers, radio host Gregory Davidzon and the Bay Democrats club, have both endorsed the incumbent.

But Saperstein argued his aggressive in-person campaigning—plus the help of his Soviet Union-born wife Elina—will win him those crucial blocs in November.

“I’m focusing on meeting people in the district, going door-to-door, having events like this,” he said. “I do feel confident that we will get people out to vote, and get the Russian community and the Orthodox community on our side.” 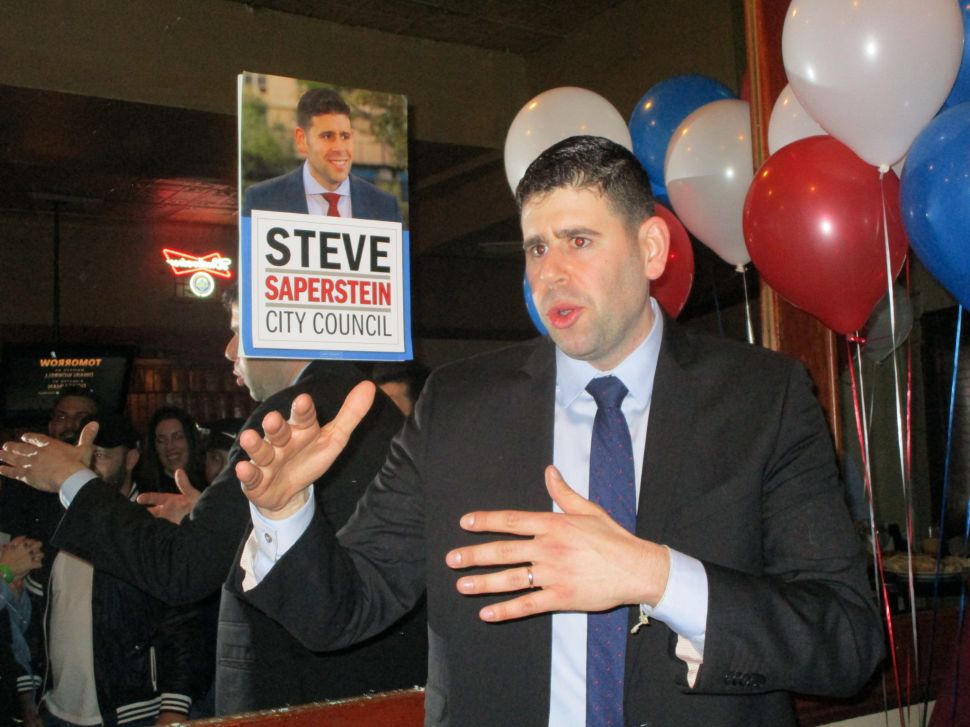