I owe a political debt of gratitude to a failed music festival in the Bahamas promoted by Kendall Jenner and Bella Hadid.

Let me explain. Donald Trump’s Presidency is the Fyre Festival. It all makes sense now: we’re in an age of big, broken promises. We were sold a package of dominant celebrity, superficial flashes of success and popularity—but the reality is stale Velveeta in a styrofoam box. Ergo, the Trump presidency.

In all seriousness, Donald Trump has been President for about 114 days, or 2784 hours, of which 2782 have been in crisis mode. I’ve subtracted the two disciplined, focused, dull-as-dirt hours that Trump managed to read from a teleprompter and relatively calmly deliver his address to Congress to the orgiastic joy of the pundit class. So, using bare numbers, the Trump Administration has been in crisis mode for 99.93% of a young Presidency.

This is supposed to be the honeymoon phase: an administration’s period of highest ratings, greatest productivity and the time in which the public generally lines up behind leadership, or at least gives the agenda a chance. But instead we have a period of abject crisis that only grows bigger by the minute. I need a neck brace from trying to keep watch on the flying news developments—each one, aside from Sean Spicer’s mismatched shoes, more substantively important than the next.

As an American I am encouraged that people are so tuned in and increasingly united in opposition to a President who is at once an authoritarian hardliner and a clownish mess—a quality not incidentally shared by many dictators. The Duvaliers of Haiti and the Kim Jongs Un, Deux or Trois aren’t exactly paragons of “having it together,” but they know how to dismantle the institutions that hold a government and society together.

Last week, though, after watching relatively superficial paper cuts turn into deep axe wounds, I realized that we aren’t seeing a Presidency play out. Rather, we are witnessing the political version of a frenzied monkey hurling its own feces at a crowd of zoo-goers on a hot day. Or in a more high-minded comparison, Shakespeare’s sound and fury signifying nothing. Have a Russia problem? Invite smirking Russian officials into the Oval Office and have it blasted over Kremlin-controlled media. Have a Nixon problem? Meet with Kissinger! And, as Andrew McCabe and Rod Rosenstein painted their bosses into corners of their own making and every branch of government springs more leaks than a colander, the walls literally started to close in, like that garbage-compacting scene in Star Wars.

Following the firing of FBI Director James Comey, I couldn’t help but wonder, much like Carrie Bradshaw: Is this the end of the beginning—or the beginning of the end?

It’s the beginning of the end.

But it will be a long, long end—if for no other reason than the fact that Trump hasn’t lost his popularity with Sean Hannity, Rush Limbaugh or the base of the base. Those are the voters who turn out in a primary. And Republicans in Congress have two words, “Eric” and “Cantor,” and are still very scared of right-flank primaries. Regardless, the end of this presidency will be exponentially longer than its beginning—a steady stream of hostile hearings, shock events, revelations and raw anger.

Even if Trump lasts to January 2021, it will still be Roman in its long decline and shattered grandiosity. It’s incontrovertible that last week was the moment the Trump Administration, with an approval rating at a mind-blowingly low 36 percent, hit the point of no return. There’s no redemption from this FBI insanity. The bloom isn’t just off the rose; it’s one of those huge, perverse flowers at the Brooklyn Botanic Garden that opens floridly and gaudily once a year, but reeks of rotting meat.

Metaphors aside, the most important question: How does Donald Trump bounce back? Answer: He doesn’t. This thing has been cracked open like a molar for the world to see. In politics, to survive a crisis, you need a bulwark of goodwill or support—or at least to be good at the bare necessities of politics. You need to be able to push reset and reshuffle the deck. The difference between Ronald Reagan (post-Iran Contra) and Bill Clinton (post-impeachment) is that those Presidents were good at being President. Reagan and Clinton did the job well. They also had records of accomplishment, solid bases, and knew how to work the levers of power and persuasion. They were surrounded by sure hands who excelled. And not for nothing, each President had six years of running the country in peace and prosperity under his belt—including successful reelections and bipartisan cred. Team Trump doesn’t, and each day they make it worse. When integrity and veracity are in deep question from day one, there’s no cushion.

To me, the most striking aspect of the recent French election was that the late-breaking hack, likely by Russia trying to influence yet another country’s election, didn’t matter. It didn’t move the needle for Vladimir Putin’s—ahem, other—white nationalist faction. And that’s because there’s an observed media blackout 48 hours before voters head to the polls, so as not to overly influence an outcome.

Fair enough: sounds good to me. Campaign face-to-face and on your merits for the final closing argument. We should try it. But most importantly, there’s no Fox News in France. No French party or candidate has a biased multibillion dollar media empire that molds opinions and, weakened by scandal or not, is still the most powerful force in politics over the last two decades. Fox News has given an American political party a movement and an identity and also established the guidelines of success or failure. There’s a reason President Trump talks to Rupert Murdoch (it is rumored) daily. Because Donald Trump is also a tabloid Murdoch creation, swaddled in Page Six. Rupert’s Frankenstein.

My point about Fox News, though, is that until Trump loses Fox News—the main information entry point to that 36 percent—his Presidency continues. Until that engine runs out of gas, even a totaled car limps along. 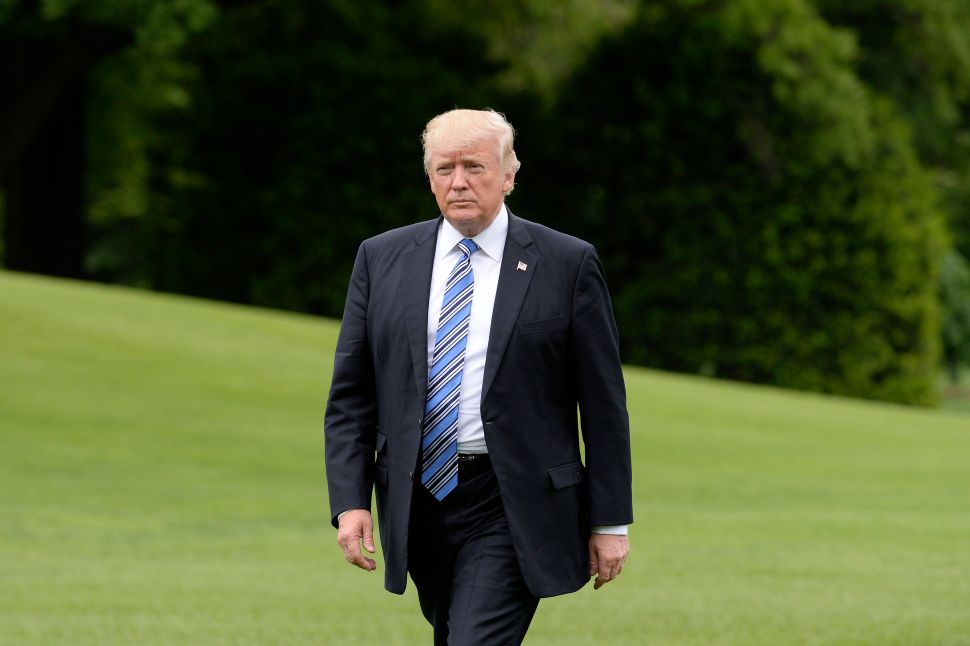