Following President Donald Trump’s inauguration, the Left’s must-read book was George Orwell’s 1984. Published in 1949, the dystopian novel predicts a world of authoritarian thought control, and it shot to the top of Amazon’s best-seller list. This summer, a 1984 play from London is opening on Broadway, co-produced by none other than Scott Rudin. There have been countless media references to the novel, including Paul Krugman’s op-ed in The New York Times on May 8, “Party Like It’s 1984.”

Margaret Atwood’s The Handmaid’s Tale is also getting a second wind. In her 1985 book, the powerful have reduced fertile women to reproductive slaves for the elite’s infertile wives. Already released as a film (with the screenplay by Harold Pinter), the book has now reappeared as a miniseries on Hulu. Part of the marketing plan is to make the story an allegory to the Trump administration. Almost everyone is having fun with the comparison.

But these are the wrong books to read and shows to watch. A much more relevant work is Orwell’s 1945 novella Animal Farm. As in 1984, he imagines a harsh political landscape. Yet, Animal Farm is much subtler—and more powerful—than 1984 or the improbable Handmaid’s Tale.

There is no sign that there is or will be any effective thought control or political repression as described in 1984. Democracy seems as powerful as ever: The courts “on an island in the Pacific” effortlessly tie up Trump’s immigration orders and the ratings on late night television’s anti-Trump rants are through the roof. The bogeyman in the night, Trump, seems to fade with each morning’s sunrise of policy reversals and statements like, “I don’t stand by anything.” The White House and the Republican-dominated Congress barely agree on a few basics, such as a budget.

Animal Farm envisioned a somewhat different scenario for political promises. Writing about the Russian Revolution’s failures, Orwell imaged a farm that overthrew its human master and replaced him with a collective leadership of pigs. These clever pigs promised to reorganize society along egalitarian (populist) lines with the animal workers being rewarded for their labor on a just and fair farm. Mirroring Russia, where Stalin replaced Trotsky and Lenin’s vision with the Gulag camps and a system of brutal repression and corruption, the ruling pigs of Animal Farm gradually became human-like and their promises of change forgotten.

The leaders of Animal Farm maintained thought control by obscuring the facts with smokescreens. In this way, the allegory to the Trump administration is dead on. Executives from Wall Street, once lambasted by Trump as “get[ting] away with murder,” are now in charge. The “currency manipulator” to be punished on Trump’s first day in office, China, is now a strategic ally helping to fend off North Korea.

Trump’s transformation into a golf course habitué after roundly criticizing his predecessor’s golf outings is right out of Animal Farm. Then, there is the NAFTA withdrawal—a pillar of his platform that is not happening.

That the populist Trump has offered unprecedented access to some of the largest corporations in America in exchange for their millions of dollars of donations is another page straight out of Animal Farm. The entire façade of governance in Animal Farm was meant to placate the horses, sheep and chickens with feel-good slogans and false agendas. Trump’s “drain the swamp” mantra would have been an appropriate Animal Farm infrastructure slogan. The pigs, who were afraid they would lose control of the farm, created imaginary threats as a tactic to bind their subjects. How is this different from Trump’s alerting us to the threat of Mexican rapists?

Orwell, who had perhaps the most brilliant political mind of the twentieth century, even anticipated the phenomenon of fake news. The historic Battle of the Cowshed, in which the animals liberated the farm from the humans, was told and retold with fake news added as the pigs began to squabble. New spins on the facts were constantly required. Thus, a true hero of the Battle of the Cowshed, Snowball, was later reported to have sided with the humans. Even Trump’s deleted tweet about how it was an “honor to host [Palestinian] President Mahmoud Abbas” at the White House was foreseen in Animal Farm, as writing on the barn wall was changed and erased as politically necessary. The animals could not recall the original writings or how they were altered.

Orwell even anticipated Sean Spicer. The pigs have a spokespig named Squealer who is in charge of reconciling the irreconcilable and parsing the absurdities of non sequitur pronouncements from the pigs’ administration. To read Squealer’s spin on the changes in farm policy is a literary treat no reader will ever forget.

So, if you are looking for allegorical literature to understand today’s politics, Animal Farm is a great guidepost. It is much more politically relevant than 1984 or Handmaid’s Tale. It should be the next book to jump to the top of Amazon’s bestseller list. Do yourself a favor and secure a copy fast.

Jonathan Russo has been observing and writing about the Mid-East, domestic politics and China for decades. In the last 10 years his articles have been published in The Huffington Post, Times of Israel and his own site JavaJagMorning.com. He’s been an executive in New York media world for over 40 years and resides in Manhattan. 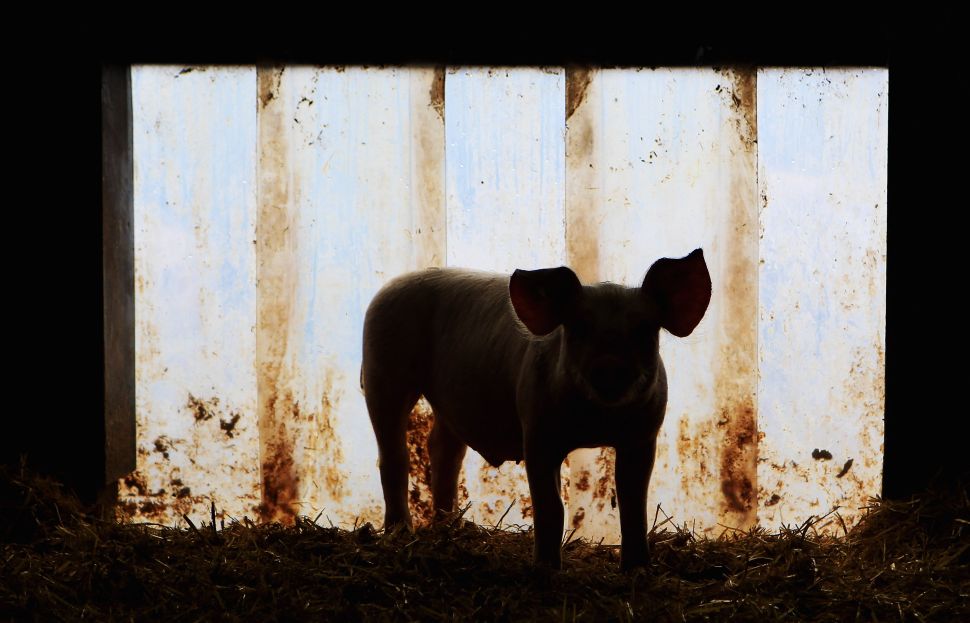