After President Donald Trump abruptly and unceremoniously fired Federal Bureau of Investigation Director James Comey today, Senate Minority Charles Schumer and Senator Kirsten Gillibrand demanded the Department of Justice appoint a “fearless, independent prosecutor” to probe the possibility the Trump campaign colluded with the Russian government in its campaign of cyber interference in last year’s election—noting Comey was overseeing that investigation at the time of his termination.

Schumer, the most powerful Democrat in Washington, addressed the press in the nation’s capital just a short time after Trump revealed he had removed Comey from his post. The senior senator from New York disclosed that the president personally notified him this afternoon of his intention to let the FBI director go.

“I told the president, ‘Mr. President with all due respect, you are making a big mistake,'” Schumer said. “He didn’t really answer.”

Schumer was one of a number of Democrats who criticized Comey for informing Congress just a week and a half out from Election Day that the FBI had struck upon new emails “pertinent” to its investigation of Hillary Clinton’s private email server. But the senator today noted that Trump could have fired Comey for his conduct immediately upon entering office in January.

Instead, Schumer insinuated the president relieved the director of his duties because of his ongoing investigation into the possibility that the Trump campaign had contacts with Russian agents, and conspired to undermine Clinton’s candidacy. The intelligence community, the FBI included, has determined that Russian President Vladimir Putin personally directed the computer hacks that bedeviled Clinton’s campaign and the Democratic National Committee and the subsequent publication of the entities’ internal correspondence on the site Wikileaks.

“We know the FBI has been looking into whether the Trump campaign colluded with the Russians,” said Schumer. “Were these investigations getting too close to home for the president?”

Comey’s firing also followed reports that Comey had incorrectly testified before Congress that Clinton aide Huma Abedin had forwarded “hundreds and thousands” of emails, some containing classified information, to her husband: disgraced ex-congressman Anthony Weiner. Weiner, as it happens, was a Schumer protege who held the senator’s former congressional seat.

Worrisome to Schumer too was that Comey’s firing came at the recommendation of U.S. Attorney General Jeff Sessions. Sessions recused himself from the Department of Justice’s investigation of possible communication and cooperation between the Trump campaign and the Kremlin, after news surfaced that he had misled the Senate when he claimed that he had had no interactions with Russian agents last year.

Schumer called upon Rosenstein to immediately install an independent prosecutor to handle the inquiry.

“Mr. Rosenstein, the American people are counting on you to restore their trust in the criminal justice system,” he said, warning that otherwise, “Every American will rightly suspect that the decision to fire Director Comey was part of a coverup.”

Schumer’s remarks came just a short time after Gillibrand made a similar call over social media.

No more excuses: We need an independent special prosecutor to investigate the Trump Administration’s ties to Russia.

Improprieties and odd ties to Russia have haunted Trump’s campaign and administration.

His second campaign manager, Paul Manafort, had worked for years for deposed Ukrainian President Viktor Yanukovych, a Putin ally—and had to resign last year amid revelations that he had received illegal payments from the pro-Moscow regime to lobby the U.S. government.

Campaign advisor Carter Page has confessed to having had contact with Russian agents, and Trump’s son-in-law and aide Jared Kushner has admitted to meeting with Kislyak himself. Trump advisor Roger Stone also claimed to have a “back channel” to Wikileaks, and appeared at times to have foreknowledge

General Michael Flynn, the president’s national security advisor, had to step down in February after reports surfaced he had held illegal conversations with Kislyak about lifting sanctions former President Barack Obama imposed upon the Russian regime for its election interference—and for lying about those conversations to Vice President Michael Pence.

Deputy U.S. Attorney General Sally Yates, who the president fired for refusing to defend his first attempt to bar travel from several majority-Muslim nations, testified yesterday she had warned Trump about Flynn’s activities.

A unverified dossier that a former British intelligence agent compiled for the president’s political foes claimed that Putin possesses a video recording of several Moscow prostitutes urinating on a mattress for Trump’s pleasure, and has used it to cultivate and control the commander-in-chief. Trump has denied these allegations.

Because the president has refused to release his taxes, it is impossible to know whether he has had business dealings with Russian interests. He lashed out at the Democratic minority leader online a few hours after the press conference.

Cryin' Chuck Schumer stated recently, "I do not have confidence in him (James Comey) any longer." Then acts so indignant. #draintheswamp 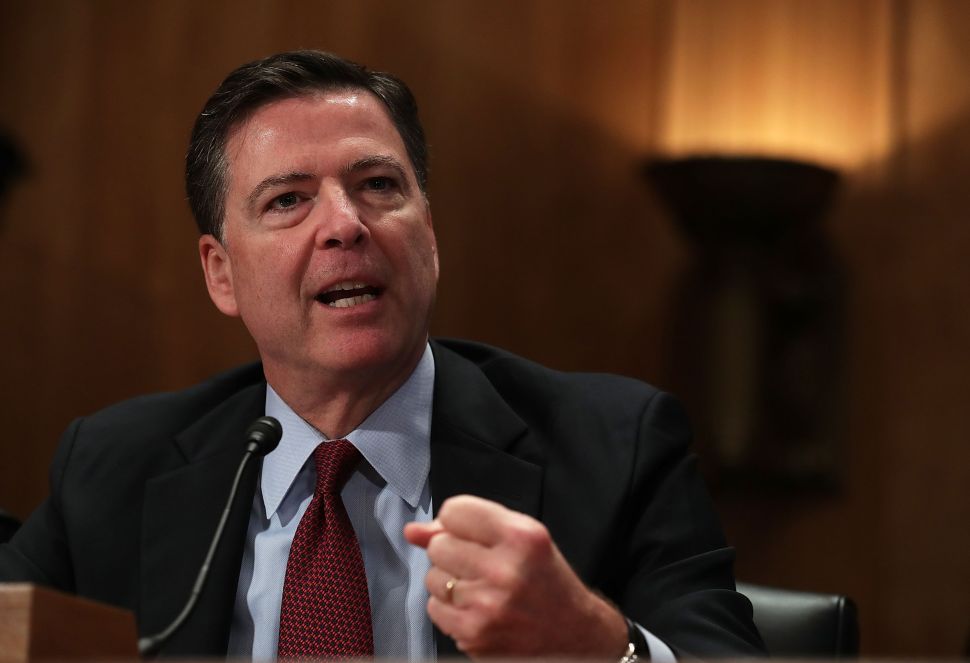