It’s a bright new world where pop-punk and emo are genres worthy of praise, filled to the brim with innovative, unique groups like most of the bands on Triple Crown Records: Foxing, Sorority Noise, and the vastly underrated Fireworks, to name but a few.

Nashville’s Free Throw, one of Triple Crown’s most recent signees, are just the latest example of one of the best young bands putting their own fresh spin on emo with their great upcoming new record Bear Your Mind.

Lead singer Cory Castro writes his heart out on tracks about body image and familial anxieties, which promises to bring a more introspective angle to world of cathartic pop-punk.

Observer recently talked to Castro about what it’s like working with one of the best labels in modern emo, calming down, and playing fantasy football with bands you used to jam out in your underwear to.

Thanks. Enjoying a nice Tuesday birthday.

This is your first record on Triple Crown. How does it feel to be on a label with Foxing and Sorority Noise and You Blew It!?

I would have never expected us to be on a label as cool as Triple Crown. The way it happened was really cool. Fred happened to catch us live and the next thing you know we were signed to Triple Crown. It’s been one of the coolest experiences of my life. They’ve been the nicest people on earth, it’s been a pleasure to work with them.

First off, you have this song called “Better Have Burn Heal.” Is that a Pokemon reference?

[Laughs] Yeah it is.

Are you a big game player?

I’m a huge gamer. I have a Pokeball tattooed on my wrist.

What are you into right now?

We’ve been off tour for about a month so i’ve had some time to play things. I’m finally getting into The Witcher 3. I never got to play it. It’s been really cool. I’m also playing the new Mass Effect game, which is cool because I love that franchise.

Where does the title of the record come from?

The album explores my issue with body image and anxiety disorders. That’s where the title comes from. In one of the songs one of the lyrics flips back and forth between bearing something and mind and being ‘bare’ in mind. It just fit. The album is about carrying the weight of personal burdens so I thought Bear Your Mind just made sense. The album art goes along well. The mannequin holding the television on its shoulder.

The first track “Open Window” seems to be dealing with family issues.

When I was younger my parents had a hard time in their relationship as I was growing up. My dad wasn’t there a lot, into my childhood. I didn’t form a good relationship with my dad until I was older in my teenage years. My parents are together now. He finally came to his senses and now we are a big happy family. The song talks about how he showed me what it means to redeem yourself in someone’s eyes.

A lot of your music is about alcoholism and addiction. You seem to be tackling it here in a different way. A lot less angry.

I’m a lot less angry. A lot more introspective and trying to solve the puzzles instead of yelling at them until they fix themselves.

There’s a lyric that says “I”m not better, I’m indifferent”

It’s one of my favorite lyrics on the whole record. It’s on the song “Andy and I, Uh,” which is a joke title. Our friend who plays in You Blew It! Is named Andy Anaya, so we just wanted to put his name on the record in some way. That song came at a time I was seeking anxiety medication and it made me feel neutral to everything around me. Emotions weren’t a thing. I wanted to write it in a way that seemed super open ended.

So this tour you’re currently on is your first headlining tour?

We did tours when we were an unsigned band as the only band on the tour. We’ve done a co-headliner before, but I’d say this is our first real headlining tour. I’m kinda nervous.

How is it going so far?

Everything has been going well. We started at the end of April and it goes until July. Hopefully everyone likes the record and we can play it live.

What is it like putting on a pop-punk show these days? You have a community of kids who have this energy it feels tough to match.

Sometimes the crowd carries it to the next level. The more they are into it, the more we are. We tend to try and put on the best show we can. There was on time we played in Albuquerque, N.M., where we played to four people, but us and those four people had the best time of our lives.

Do you have any bands that you love being on the road with?

I think my favorite tour was when we were on tour with Tiny Moving Parts and Prawns. It’s gonna be hard for tours to live up to that. We’ve been touring so hard for the past three and a half years, you try to think back on memories and they blend together. I enjoy touring. I wouldn’t do it if I didn’t think it was fun. It’s still work. I’ve heard from a lot of bands we are a really fun band to tour with.

How is the pop-punk and emo indie band community? From the music and tours I get it is this close-knit community but I’ve never got a confirmation on that.

We are pretty close. It was weird for me especially. When we started this band this new movement had started up. When we were touring all the time I realized I was becoming friends  and acquaintances with bands I used to listen to in my bedroom. We hang out whenever we are in each other towns or cross paths on tour. We are in a fantasy football league with You Blew It!, Foxing, Tiny Moving Parts, Prawns and some other bands. I’d say we are pretty close-knit. We all tend to hang out.

Free Throw are touring with Homesafe and Heart Attack Man and are coming to The Knitting Factory on June 23. 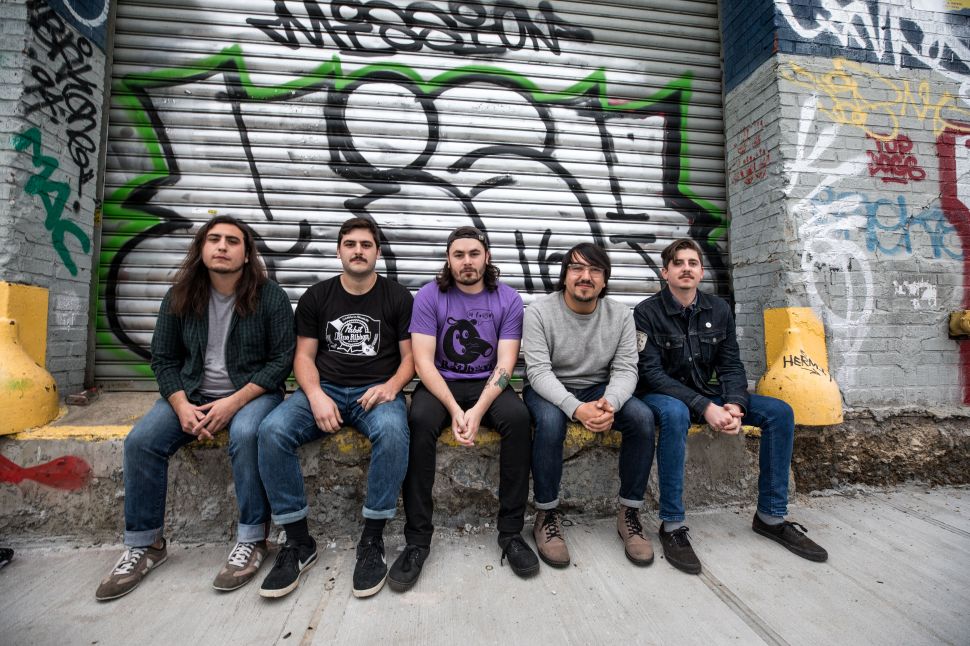