Let me just say this at the top: Erin Carr is one of my heroes. Daughter of the late New York Times writer, the beloved David Carr, I first heard about Ms. Carr almost exactly two years ago, when she was promoting her first HBO documentary, Thought Crimes: The Case of the Cannibal Cop. As someone with a somewhat morbid fascination with any true crime story that has slightly more baroque characters than, say, your average Steve Avery or Robert Durst, I found Carr’s intimate portrait of the eventually- acquited Bronx police officer Gil “Gillberto” Vale especially compelling for both its subject matter and the way Carr chose to frame him: most of the movie’s interviews with Gil involve him standing over a stove, cooking…what else?…red meat.

Ultimately though, Thought Crimes was a theoretical submission into the true crime genre; Vale was acquitted of all charges for his crime of being a little over-zealous about sharing certain fantasies online. Mommy Dead and Dearest, Carr’s latest movie (it premiered last night on HBO) tackles a much juicier (pun slightly intended) case: one that involves actual murder, Munchausen by proxy, damning Facebook posts and a victim less sympathetic than the couple who killed her. In short, the perfect gruesome crime story; one that you could easily imagine as the plot for the next season of Fargo, had it been a work of fiction. If you haven’t heard yet about Dee Dee and Gypsy Blanchard, you’ll watch Mommy Dead and Dearest with your jaw on the ground. And if you are familiar with the details of the case? Don’t worry, Carr’s incredible access, nimble pacing and subtle dramatic flourishes will satisfy you until the next season of Making a Murderer.

How did you find out about the story?

Erin Carr:  I heard the story when I read this Thought Catalog piece written by M.J. Pack. Like this long, intense weird, rambling blog post. I interviewed her for the documentary, but it didn’t make it in. It was really, really obvious that this would be an incredible doc if done properly.

There are so many of elements of this story that immediately grab you. Like the fact that the daughter is named Gypsy Rose, and it was just an ironic coincidence she also had this overbearing “stage” mom. I was aware of the case before the documentary because, well, I love true crime! But there were so many things the articles couldn’t describe the way you show it: how, in a very tragic way, Gypsy seems so much better now, in prison. People thought she had the mental capacity of a five-year-old, but she was just trapped in a prison of her own body created by her mother.

And it’s just so scary, the way it brings up all these issues of being a stage mother and Munchausen by proxy. Was that Dee Dee’s diagnosis, in your opinion?

She had Munchausen by proxy; she was severely mentally ill. And I do believe that she was evil. She made her kids sleep in the same bed as her. Her kids weren’t allowed to have any friends. She had the most sociopathic stranglehold that I’ve ever witnessed or read about. Now, Dee Dee isn’t here for us to confirm certain facts, but the evidence suggests Gypsy was telling the truth.

God, it was that Michelle Dean story that introduced me to the case. And I remember reading about the absolute torture of the surgeries Dee Dee put her through, claiming her daughter had muscular dystrophy. Gypsy had something done to her saliva glands, right?

Yes, her salivary glands. And she had a feeding tube. Because she was quote-unquote “not eating.”

We’re talking about a mother, who, like you said, may have been the embodiment of pure evil: playing on our sympathy for single mothers dealing with sick children and directly benefitting from touting her daughter as one of these kids. All the free trips, all the sympathy, all the donations…in a way, I’m surprised Gypsy was convicted, considering the mitigating circumstances.

True…but seeing Gypsy now, she seems so much better and healthier. But she still has that very high, baby voice, which is something I believe you see a lot in people who had a severely traumatizing childhood.

She’s in a constant state of arrested development, I would agree.

When did you decide this was going to be your next big project? And how did you manage to get so much access to the subjects?

My producer partner, Alison Byrne, found the story. At the time, I was developing a true crime series for HBO, and I was thinking this might make a good episode. So I reached out to Gypsy and asked “Hey, can we meet?” Within a week, I had gotten a response back. You know, “Thank you so much, I’m going to talk to my attorney Mike Stanfield.” And I kid you not, maybe three days later, she said “I spoke to Mike, and I cannot talk to you right now. I’m facing a very heavy charge.” At the time, she was facing a potential death penalty.

She was in this very precarious situation. And because I’m a long-form documentary filmmaker, it’s not like I heard that “No” and had to move on. I was able to work on different things, and eventually get access to the family; to (father and stepmother) Rod and Kristy, to Mike Stanfield, to Alea (Woodmansee, Gypsy’s friend and neighbor), to the doctors…there’s so many people who spoke for this, which was shocking, because in the beginning, everyone said they wouldn’t…or couldn’t.

As a true crime documentarian, are you ever worried you’re going to hit against something that’s potentially dangerous, or makes you feel unsafe?

I think I was a lot closer to that side of the spectrum on my last film (Thought Crimes: The case of the Cannibal Cop). Gypsy is a victim. Yes, she participated in something incredibly violent. But we have to keep in mind it was actually (Gypsy’s boyfriend, Nicholas) Godejohn who committed the murder.

You know, my therapist asked me “Why are you doing this?” But it’s a passion. Many things could happen doing this kind of reporting, but being attacked by a subject is…knock on wood…not likely.

You could be the next Ann Rule.

I know this is going to be so morbid, but I’m a true crime junkie. I feel like you made this movie for me. Well, me and the ladies on the My Favorite Murder podcast.

I did make this movie for you, Drew! And I LOVE My Favorite Murder. I just followed them on Twitter…I’m still waiting for them to follow me back.

Well, that’s really good to hear, because I think whenever women can get involved in telling this kind of story, especially since it’s about a mother and daughter’s relationship, you end up with a much richer narrative.

I mean, true crime as a genre is for women, by women. It’s not very male, wouldn’t you say?

You know, I never thought about it. I guess I go back to my entry-way into the genre, which was Capote’s In Cold Blood. But you might be onto something: it’s like how more women than men watch SVU.

When you spoke to Gypsy, how did she seem? Does she have any plans for what she’s going to do with the rest of her life, post-prison.

Well, she was sentenced to 10 years. She’s working on getting her GED; she has a couple odd jobs in prison. She’s really close and tight with her family. She’s just learning how to exist, how to be with her family, how to make friends. She says she feels more free in prison than she did in her mom’s house. That’s a really telling statement.

Going back to your last film for a second; how did the experience of visiting Gypsy in prison compare to going to interview Gil(berto Valle, aka the Cannibal Cop)?

Gil was way scarier because he was in a federal facility in Manhattan. They were super super super strict. You know, it was scary: Gil and I didn’t really know each other; Gypsy and I were able to talk for a very long time before I went there. And this is Greene County jail; it’s a county jail.

Well, she was awaiting trial, which never happened because she took the plea deal.

You know, I never want this to seem like it’s an adventure for me, because it’s not. It’s someone’s liberty. But I won’t deny that it’s somewhat exciting. I got to dress the part, and I kind of felt like Jodie Foster. But you know, Gypsy Rose Blanchard is no Hannibal Lecter; but I’m sitting behind bullet-proof glass room in a prison in Missouri, and I’m getting paid to be there. I mean, it’s a very important and exciting career moment. All I can hope is that it goes well.

I imagine that if it was me in your shoes, I’d be vacillating between terrified and excited. Because yes, she might look like a little girl, but like you said, you’re still not allowed to murder people. Gypsy was involved in this heinous crime.

The big turning point in the story was that after the murder, Gypsy and her boyfriend wrote this  damning FB post from Dee Dee’s account. Did you get a sense why she did that?

Even without that post, she would have 100 percent been caught. They didn’t clean the crime scene. All the evidence points to people they knew. Yes, the Facebook thing doesn’t make any sense, but she would have been caught automatically.

Really? Because everyone thought she was a total invalid. Wouldn’t people assume she’d been kidnapped?

They would have found her. You know, if the investigators are any indication of that police department, I think they did an incredible job.

When you talked to Gypsy, did you get any sense of whether or not she felt remorse?

Totally. She had a ton of remorse. You know, she and her mom were next to each other her whole life. And while she was abused by her mom, they were best friends for a large period. I think she deals with the guilt of her mom’s death every single day. I think she has total and complete remorse for what she did.

One last question: this story seems ripe to be made into a film or series. Who would you cast to play the roles?

You know, it’s so funny, someone told me the other day that they thought Chloe Moretz should play Gypsy. I don’t know about Dee Dee….

…she’d be a great as Kristy. And Woody Harrelson as Rod.

That is a dynamite cast.

I can’t take credit for it; a little bird told me. 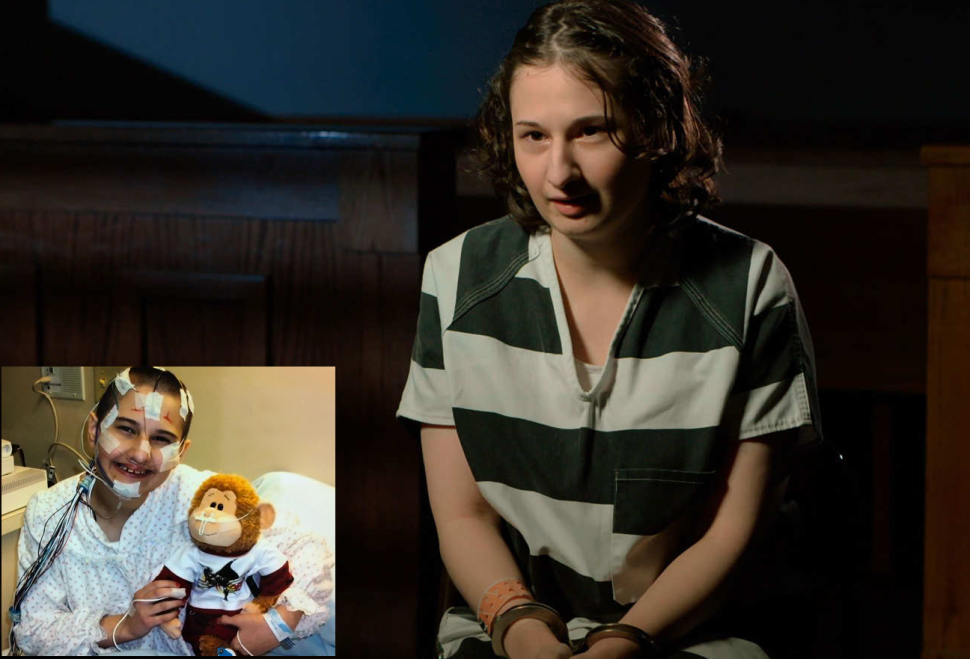