After all this time, I can admit it: It feels slightly wrong to recap Twin Peaks. Yes, I get how hypocritical that sounds, as ostensibly the world’s biggest Twin Peaks fan (my sister gave me my third TP tat this weekend, of Laura Palmer’s hands in the “Meanwhile” pose), but trying to excavate the myriad of layers of this third episode—which really put the “Ambien” in “Ambiance” (the E is floating off into The OA hyperspace along with not-Josie) feels, at times, like a fruitless task. Again I ask: how am I, or anyone, supposed to “recap” a mashup of a visual art installation on LSD meets the weirdest dream you ever had?

It would be one thing, actually, if the show made zero sense: if, like Homer Simpson, we could just let the show’s strangeness wash over us and appreciate its brilliance week’s episode as a Beckettian exercise in dialogue and a Švankmajerian exercise in stop-motion animation without feeling like we need to know what’s going on. But the fact is, Lynch does use a lot of strange, seemingly random symbols in his visual storytelling, but there are also these…let’s not call them Easter Eggs quite yet, since they could still technically be clues…callbacks, let’s say, that are actually worth Googling around to learn more about. You actually do need to know some shit about the entire Twin Peaks mythology—including, unsurprisingly (to me at least), quite a bit from Fire Walk With Me—in order to “get” this show on this secondary level. Maybe you’re not interested in that underlayer at all. But since you’re reading this, I assume you are at least a little curious.

So let’s start with that, a rundown on all the stuff that needs explaining, which I will do to the best of my abilities in the capacity as someone who once claimed she “totally got” Mulholland Drive after a single viewing. It’s going to be less “recap” structured, with me telling you what happened, because…I can’t, really. What happened? That seems like the wrong question to even ask. Let’s just start with all the other stuff:

Floating in space past Coop and the Good Ship Black Lodge, we see the disembodied head of Bobby Brigg’s dad, Major Garland Briggs. (Side-note ALREADY: The actor, Don S. Davis, died in 2008; Log Lady Catherine Coulson died in 2015; Albert, aka Miguel Ferrer, died earlier this year. All three, it should be noted, appear on this series as themselves, which lends credence to my theory that Lynch had another episode planned that was supposed to be the show’s finale, involving Briggs rescuing Dale from the Black Lodge. Do you think it’s possible that a LOT of posthumous actors made it into the series? It’s possible he was picking up scenes over the last 25 years,  Boyhood-style.) Honestly? I thought we were watching Leo Johnson as the BigHead, but right, Briggs makes more sense: we know he has spoken to Dale-as-Bob, and as both a military man and someone who believes the truth is out there, he’s a more appropriate tether between the Black Lodge/The Sunken Place/Starship Lynch and reality. I mean, last time Coop talked to Leo, I’m pretty sure it didn’t go…great?

“Blue Roses” is FBI code for a case that involves supernatural elements. So, as far as the blue roses rabbit’s hole has led us, my responses is a resounding “No shit, buddy! Hope your head didn’t make that entire galactical journey just to tell Dale Cooper something that literally anyone who has heard of Twin Peaks understands, let alone a guy who has just been stuck in a spiritual hotel/prison for 25 years. Yeah, some supernatural stuff is going on, Briggs. Your head is floating in outer space or wherever you are, this woman with a caul over her eyes (named Judy in credits, but come on, why NOT have it be Josie, the only Twin Peaks resident, as far as I can remember, who actually went missing and whose body was never found because…wait for it…she got her soul trapped inside a damn doorknob.

Tl; dr? Basically, Cooper’s not out of the woods (or sycamore tree forest) quite yet. Something went wrong in the transfer back…Bob was supposed to return, leaving Cooper (I’m assuming?) his former body. Though what we get, when Cooper finally remembers the 2:53 is the right time to try to go through the electricity outlet prong and back into reality, is something far weirder. Which is told to him by the Woman in Red, whose character name in credits is “American Girl.” American Girl just happens to be the same actress who played Ronette Pulaski (Phoebe Augustine), the girl with Laura on the night of her murder. Just like seeing Jacques—a character that was murdered season one—bartending in the pilot of  Twin Peaks: The Return, I’m not sure if this is meaningful in some grander way, or if it’s another kind of Easter Egg/clue. A third interpretation comes from one of the most intriguing new characters in Twin Peaks.

Dopples are a popular theme of Lynch’s, and I think it’s the other side of the same coin: whether it’s your body being taken over by some paranormal evil, or a person out there that’s your carbon copy (like the Jacques and Ronette sightings), the results are equally eerie to consider. Dopples can be as neutral as an actor playing multiple roles (Fargo, Dead Ringers, The Double, that episode of Buffy where Xander gets split), or two actors playing one character (Bill Pullman/ Balthazar Getty in Lost Highway). But either way, we’re talking literal identity theft, here in the latter example.

The Blue Book Project, Mike and His Arm Thing, and Making a New Eye-Tree Stalk: But what about Dougie? Who is he? Why is he yet another Cooper Doppleganger? We’ve heard his name before,  because he’s the publisher of Twin Peaks’ local newspaper and his brother is the mayor of Twin Peaks. And, as H. Perry Horton points out in his article over at Film School Rejects, Frost’s Secret History of Twin Peaks fleshed out Dougie’s role even more: “It’s revealed Dougie’s basically the head honcho behind Project Blue Book’s involvement in Twin Peaks.” Since I haven’t read that and I don’t know Project Blue Book off the top of my head, I’m just gonna leave it as this: Dougie was somehow manufactured, probably by Bob, to take his own place in the Black Lodge, which meant something VERY different from Dale’s experience. Dougie, after announcing he feels “funny” upon entering the Lodge and staring at a backwards-talking one-armed man, begins to shrink, his ring falling off. Then…ummm…his head kind of becomes a smokestack? And then out of it rises a solid gold sphere? And then becomes the new version of Mike’s arm, aka BOB. Mike, if you remember, has his own dopple, Gerard, a shoe-salesman, but they share the same body.  “Mike” is the keeper of the Black Lodge at this point, it looks like. Good for him! I mean, good for a former serial rapist who found god and chopped his own arm off to escape the Evil Dead implications of Bob’s control over his body. (Is the connected to the tingling/”dead arm” experiences of Twin Peaks residents?)

Anyway, spoiler alert: Dougie becomes the new tree thing. But if he’s manufactured, like a Westworld host, that implies he doesn’t have a soul. Which actually tracks, since souls get “split” in the Black Lodge, maybe only a pure being like Doug can withstand the transformation into being the next Bob.

Portals, Arms and a Demon Key Party Analogy That Doesn’t Quite Track:

As Dale attempts to leave the Black Lodge through a two-prong outlet that only sometimes leads to that box back in New York, and Evil Dale starts choking when something appears in his car’s cigar lighter outlet on his way to South Dakota. (Going to find Lillard, perhaps? The new Leland?) Meanwhile….elsewhere, a man named Dougie who starts having familiar symptoms of Black Lodge Fever: after his prostitute friend goes to shower, he finds he’s wearing the bonding ring of the Black Lodge, which keeps humans tied to that world. Also, Dougie’s arm went numb, how about that? (Last episode of Twin Peaks, basically the entire town’s left arm went numb. In Fire Walk With Me, Theresa Palmer complained of having a numb arm before she was murdered. So….it’s not a good sign.)

Whatever plan Mike and the Lodge had about bringing Bob back was thwarted when Bob wrecks his car, trying to outpace the Lodge’s pull on him.  He’s seeing those Red Curtains, man.  Dale can’t trade the place with Bob who is either fighting for his life or dead, so in a supernatural equivalent of a key party, it’s Dougie who is forced into the Black Lodge while Dale Prime is deposited, dark suit and perfectly coiffed hair, into Dougie’s room. Now if Cooper is All Good and Bob is All Evil then Doogie is like the…I dunno, he’s the Turtle of this entourage. Overweight and schlubby, we first see him sexing up a prostitute in what looks like Albuquerque but ends up being Nevada. I think I assumed it because between the hit men arranged outside his place with guns, I got a definitely Breaking Bad feel. But luckily, Cooper drops something while his lady friend drives him to a casino, still believing him to be Dougie having a mini-stroke.  “Ask for help, she tells Cooper, who goes in and does exactly that, after the most amazing casino scene that, for no other reason, should convince you Lynch is a genius and deadpan humor. “Hellooo?” Dale, still slightly stunned and confused, can only repeat the last words he heard. “Call for help” and “Hello!” which he overhears when a guy I’m pretty sure used to be in Mr. Show wins a jackpot. Soon, Cooper begins to reclaim some memories,  triggered by the bells and whistles of the Casino but vidualized in these very un-Lynchian like little thought bubbles:

There’s other stuff in this episode as well: that stilted Hawk/Andy/ Lucy meeting in the police conference room where Lucy confessed to eating some of the evidence of the Cooper/Palmer case (a chocolate bunny), and Deputy Hawk is just so baffled about how these two people still have jobs. Though, for an officer of the law coming to the station and demanding you reopen all the files on a 25-year-old cold case because this lady said her log told her that the answer was somehow connected to his Native American Heritage, he doesn’t really have the right to roll his eyes at these two. Oh, and…FBI Director Gordon Cole is still around with Albert, trying to figure out what happened in New York. Now the premiere hinted that the FBI might have a secret unit devoted to  supernatural phenomenon may sound a little X-Files-y to you, but just remember where Duchovny got his start: as a transgender federal agent on Twin Peaks:

Hopefully, next episode will see the return of Audrey. God, I really want Audrey back. 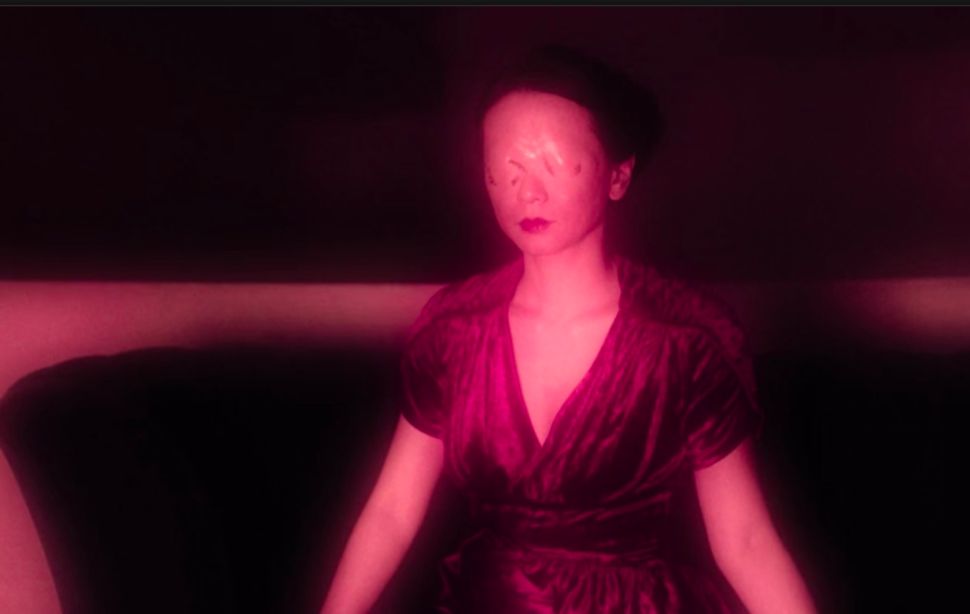