Fast food workers and elected officials joined a union-led demonstration in front of a McDonald’s in Midtown Manhattan this afternoon to push for better pay and labor standards and to oppose President Donald Trump’s aggressive immigration enforcement agenda.

Demonstrators stressed that black and brown workers at fast food restaurants in the five boroughs need less strenuous hours and higher wages—and fewer fears of arrest and expulsion for their immigration status. The rally, organized by 32BJ SEIU and other members of the “Fight for $15” movement, coincided with May Day, celebrated abroad as International Workers Day.

“We are workers from all walks of life. We are immigrant workers, we are U.S.-born workers, but we’re here united to fight together for justice, for workers’ rights,” 32BJ SEIU Vice President Shirley Aldebol said. “And we fought for 15 and we got 15 here in New York but many, many workers have been left behind, and our brothers and sisters in fast food [industry] are still fighting for dignity and respect on the job.”

Under pressure from organized labor, Gov. Andrew Cuomo pushed through reforms in 2015 that will raise the minimum wage in the five boroughs to $15 by 2018.

The rally was one of many actions taking place throughout the city, the country and the world against Trump’s agenda, which includes expanding immigration detention, building a wall along the Mexican border and temporarily blocked executive orders barring entry to people from Muslim-majority countries and withholding funding from so-called “sanctuary cities.”

City Council Speaker Melissa Mark-Viverito noted that May Day commemorates the 1886 Haymarket affair in Chicago, when workers united “to demand dignity in the workplace.” She highlighted the package of legislation the Council has put forward to regulate scheduling and workplace procedures for fast food and retail workers.

“Since then, we made many strides,” Mark-Viverito said. “We’ve accomplished a lot to create decent working conditions for workers and to be treated with dignity and respect. That is the power of the unions as well in the struggle that have been able to elevate the working conditions for workers so we respect and we pay honor to that struggle, and we thank the workers that are here today to say that we stand alongside you.”

She also recounted the struggles workers are currently facing in her native Puerto Rico, where protests are taking place for May Day as the due date for the island territory’s crippling municipal debt approaches.

“Today, in Puerto Rico where I am from, there is a major mobilization against an attempt to basically eradicate and erase union contracts to take away the benefits of the workers and to try to destroy the public university system,” Mark-Viverito continued. “There are attempts to do that. So there’s massive mobilizations on the island as well and we all come together as workers to demand respect and dignity.”

Ahead of the rally, Mark-Viverito and fast food workers marched along the block, chanting, “The workers united will never be defeated!” They were holding posters were slogans such as, “Justicia Económica = Justicia Racial = Justicia Migratoria #Fightfor15,” “$15 #FIGHTFOR15” and “WE WON’T BACK DOWN.” Workers shared their experiences and called for better treatment of workers and immigrants.

Councilman Ydanis Rodriguez, a native of the Dominican Republic, got the workers to repeat after him as he sought to send a message to the Trump administration about immigrant and workers’ rights. 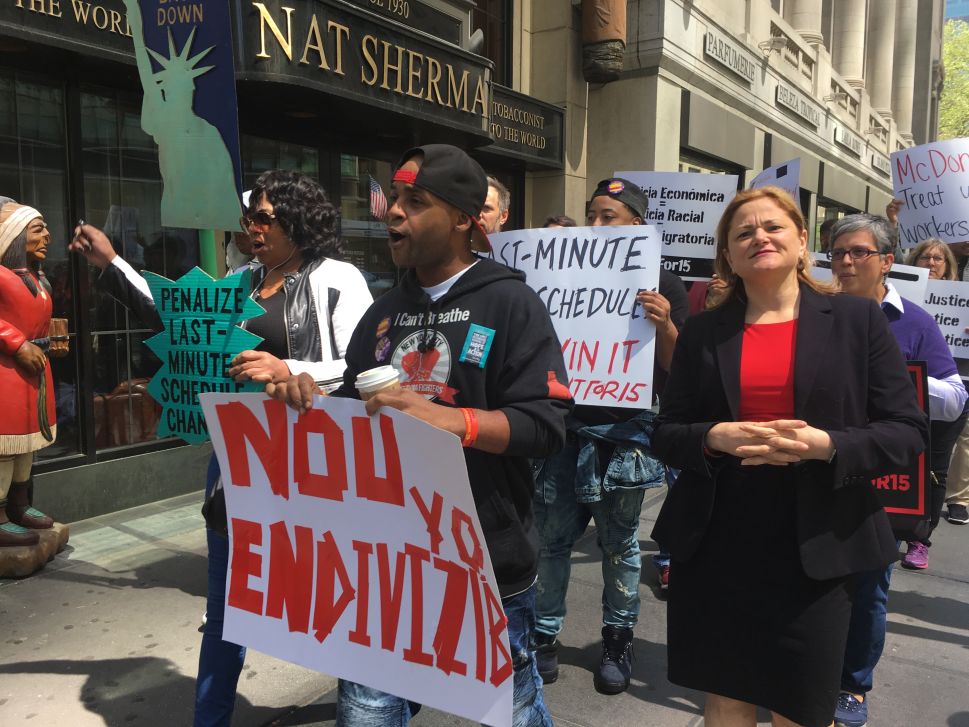