NEWARK — Phil Murphy’s vast investment portfolio includes dozens of oil and energy companies, and those holdings have become a flash point in the Democratic primary for governor since Assemblyman John Wisniewski, who is battling Murphy for the nomination, seized on them during a debate Thursday.

“Clean air and is a right for all New Jerseyans, and we get there when we ensure that all communities benefit from sound environmental policy,” he said.

But as Clean Action praised Murphy for his green bona fides, a small group of protesters hovered nearby.

Their mission, they said, was to get answers from Murphy about the hydrofracturing and pipeline investments in his portfolio. Murphy opposes fracking and the Penn East pipeline as a matter of policy, but he’s invested in companies seeking to do both.

Like Wisniewski, the protesters called on Murphy to divest from holdings that include the controversial Dakota Access Pipeline in North Dakota.

Although Murphy noted following Thursday’s debate that divestment might be a reasonable course of action, he did not repeat that possibility on Monday. Instead, Murphy said he would avoid conflicts of interest by putting his investments into a blind trust. And he said his investments do not guide his policy focus.

In addition to an endorsement from Clean Action, the Sierra Club and the League of Conservation voters are also backing the Democrat. Wisniewski is calling on those groups to rescind their endorsements.

“He is welcome to say what he wishes,” Murphy told Observer NJ. “I am honored by the company I keep and I am proud of these endorsements. They came about, I believe, because people looked at us and said, ‘He means what what he says.’ My wife and I have a long, deep history of supporting environmental policies and it is unambiguous.”

Last week the New Jersey Conservation Foundation and Rep. Bonnie Watson Coleman (D-12) called on the New Jersey Department of Environmental Protection to reject the PennEast pipeline. Murphy is invested in a company behind the proposed pipeline, which would run from Pennsylvania to Mercer County.

According to protester Robert Lynch, a divestment from Murphy in “polluter” companies would be a good first step in earning the trust of environmental activists. “I  am a progressive,” said Lynch, a Bernie Sanders supporter during the 2016 presidential race. “I am looking for a Bernie-like person to lead. I don’t think Phil is that. I see him as a Hillary Clinton, Barack Obama kind of liberal.”

Wisniewski, meanwhile, is a lawyer who represented a polluter in Carteret.  His campaign on Monday rolled out a website — frackingphil.com — littered with attacks on Murphy. 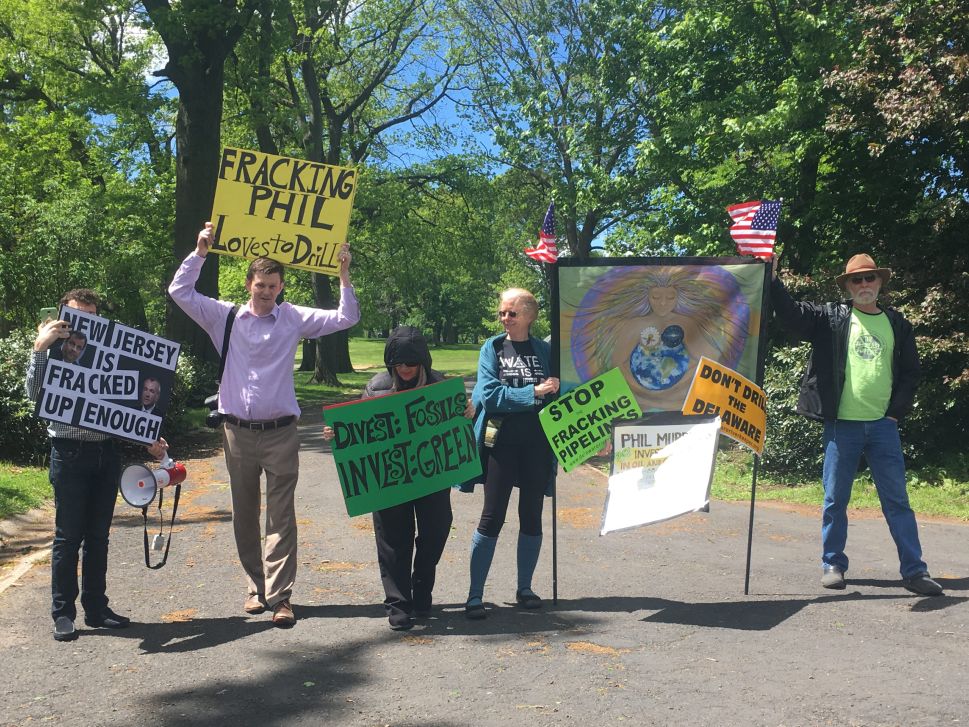