They got what they paid for: a Photoshopped image, no substance.

Observer’s Margaret Abrams read the tea leaves last week to report that Ja Rule and entrepreneur Billy McFarland’s luxury-marketed Fyre Festival was marked for death before anyone had even arrived.

Now McFarland and Ja Rule will have to reckon with the class action lawsuit filed Sunday, seeking an excess of $100 million in damages for a “lack of adequate food, , shelter, and medical care [that] created a dangerous and panicked situation among attendees—suddenly finding themselves stranded on a remote island without basic provisions.”

Watching the drama unfold on Twitter last week, as verified accounts of branding bloggers with roman numeral suffixes in their last names had no choice but to live in “third world” horror for a day, the subsequent deluge of jokes and memes proved that Twitter has a keen wit for the sweet taste of Deus-Ex Machina.

To anyone who felt that the incessant glut of sponsored booths and artisanal flower-crown spirit animals have been making American music festivals look basic for years, this disaster was tantamount to karmic retribution.

Our hearts go out to those victims of the #fyrefestival massacre pic.twitter.com/yAg5rTGL8E

As a communal means of sharing satire, tweets and memes allow for a timely, telling amount of catharsis. But as is often the case, buried in our pleasure at watching people of privilege forced to live as “the other half” for a minute was an important lesson. It’s a lesson we’d like to repeat here so that any potential resonance isn’t silenced by mocking and ridicule.

That lesson is simple: having money ≠ having experience.

The tried and true “throw some money at the problem” idea accurately puts forward that those with the funds to burn can get out of many problems, or work around many obstacles, just by spending. And money certainly can buy the right people, the right team, the right workers to realize a vision and help it manifest. But this onus of judgement, of discretion and of tactical implementation still falls on the spender. Spending that money is easy. Spending that money wisely is much more difficult.

And really, the only way to chastise someone of means is to question their ability to spend wisely, laughing at their measly ROI and mocking their tightening bottom lines.

It’s not a particularly new or novel concept that money ≠ experience, but our endless American deification of people with lots of money and no talent suggests we need this reminder more than ever now.

Consider the current White House cabinet of Goldman Sachs executives and CEO Saturday-morning cartoon villains. Consider our modern media infrastructure, including all the publishers who’ve always wanted to own a paper, but couldn’t care less about how to tell a good story, let alone what constitutes legitimate journalism, and see their outlets declining in readership because of it. Consider all popular musicians who’ve come out of nowhere, not once appearing at a local venue, then all-of-a-sudden booking large-capacity rooms.

“We were a little naïve in thinking for the first time we could do this ourselves,” Billy McFarland told Rolling Stone. “Next year, we will definitely start earlier. The reality is, we weren’t experienced enough to keep up.”

Soak that in for a minute—someone of means just took personal responsibility for their actions.

Of course, that admittance is buried under a whole spiel about how, when McFarland and Ja Rule’s private plane ran out of gas and stuck them on The Exumas, they fell in love with this wondrous, exotic new land they had discovered. Motivated by passion, Ja Rule and McFarland knew that this new land would be the spot of their gathering, planting a pirate flag sporting the dollar sign firmly in the sand.

This seems like a good time to mention the movie we are making with @thelonelyisland about a music festival that goes HORRIBLY WRONG.

In a revelation that should have sounded way more surprising, Seth Rogen and The Lonely Island announced that McFarland and Ja Rule had unknowingly realized the plot of a film they’re writing, which some outlets considered may be a joke but, as of this writing, seems to actually be in development.

Rogen’s a huge festival-goer, and you can even hear him telling Jonah Hill that he’s heading straight to Burning Man over the closing credits to the vastly underrated Comedy Central Roast of James Franco. Even insofar as Burning Man, centered on personal transformation and manifestation of a higher self, has been corrupted by a “billionaire’s row,” America’s corporatization of music festival culture is ripe for a ribbing.

But Rogen, talented screenwriter that he is, knows a good film has to see its characters undergo some sort of change by the story’s end. Even in his most lowbrow comedies, after the dick joke-loving bros see their bromance threatened by the rest of the world, they come together again, stronger and wiser. Pineapple Express, his vastly underrated satire of weed culture, sees its characters reach epiphanies about kindness and camaraderie. In Rogen and The Lonely Island’s music festival gone wrong, what will the third act character growth look like? And will they give Ja Rule a cameo?

It’s hard to imagine, just as it’s equally hard to imagine McFarland, Ja Rule, or whichever Jenner got involved learning anything from the Fyre disaster except for how to lose less money next year.

“Thank you all for participating in the Fyre Festival social experiment,” read a fake Ja Rule tweet that went around on Friday, “where we exposed hundreds of millennials who have never experienced true adversity the hardships facing refugees in foreign countries. This was an eye opening experience for many of us, and we walk away with a new perspective on the human condition.” 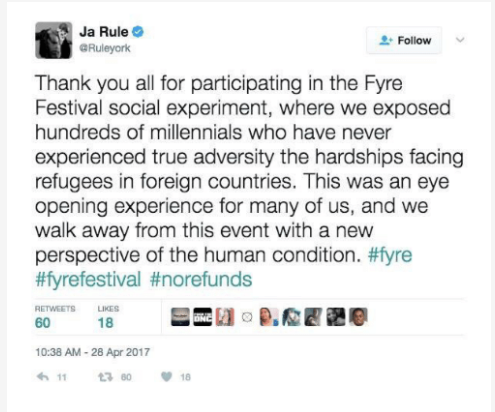 Wouldn’t it be great if that were real?

Staying away from the first year of a music festival, traditionally rife with growing pains but never of this magnitude, is a lesson that many music fans have learned long ago. But for those attracted to the idea of a lifestyle excursion, Fyre Festival never really was about the music to begin with—it was about the prestige and exclusivity of a costly ticket and a luxury locale.

To see that prestige vanish should be a lesson, not only in the cosmic worthlessness of privilege, but in the truth that money alone doesn’t a colonized, milquetoast ecosystem make.

You need experience, substance, and certainly a bit of intelligence to build something sustainable, even if only for a few days. Without those things, there’s nothing left but an Instagram feed of influencers with no influence, looking weak and vulnerable in a style amusingly off-brand. 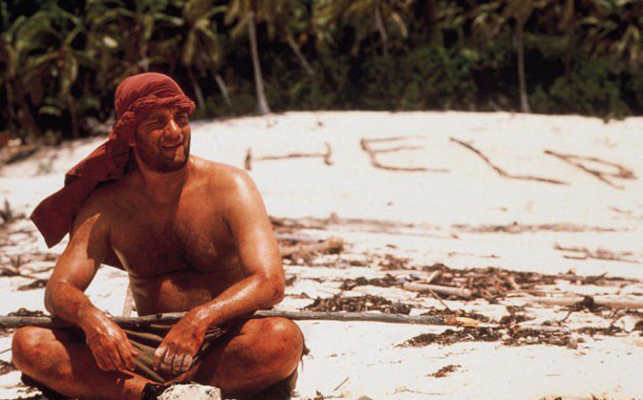