The online classifieds site Backpage became notorious in recent years for its “adult services” section, where children have been bought and sold as prostitutes. In light of this statistic, the federal government recently intervened—following a Senate hearing in January, Backpage shut down its escort page, citing “government censorship.”

But users still advertised escort services on the site’s “Dating” section, using phrases like “looking for a good time”—two women who did just that were murdered late last year.

Backpage’s main defense of its actions rests on an obscure government provision: Section 230 of the Communications Decency Act of 1996, which states that “No provider or user of an interactive computer service shall be treated as the publisher or speaker of any information provided by another information content provider.” Basically, this means that sites like Backpage (along with social networks like Facebook or Twitter) are not liable for what users post on their sites.

This loophole has been pretty successful for Backpage—while several state Supreme Courts have ruled that the site could in fact be held accountable for its content, the U.S. First Circuit Court of Appeals reversed this decision, ruling that Backpage was immune from liability.

And according to a new campaign, Backpage has one other key ally in its fight against Section 230: Google. The search engine supports the statute,  mainly because it has benefited from it in cases where defendants claimed unsuccessfully that their search history was unflattering.

A group of advocacy organizations, including Consumer Watchdog, DeliverFund, Faith & Freedom Coalition and The Rebecca Project for Justice, sent a letter to Google yesterday, asking it to “cease its campaign to blindly oppose necessary modifications in Section 230 that would allow such cynical businesses as Backpage.com to be held accountable for actively aiding and abetting child sex trafficking.”

The missive, which is addressed to Alphabet CEO Larry Page and chairman Eric Schmidt along with Google CEO Sundar Pichai, also name checks two “nonprofit recipients of Google’s largesse”: the Center for Democracy and Technology (CDT) and the Electronic Frontier Foundation (EFF). Both of these organizations defend digital civil liberties like online privacy and net neutrality.

They have also, however, defended Backpage’s adult services work, and called the site’s shutdown of that section a “blow to free speech online.” The letter to Google claims these actions “have done little more than protect a notorious sex trafficking hub from being held accountable by its victims.”

Google is certainly a bosom buddy of both organizations—CDT has received millions of dollars from the company, and as such has been silent about the tech giant’s data mining. Both the EFF and the CDT are also involved with Google’s policy fellowship program.

As such, the letter asks Google, the CDT and the EFF to support “a narrow amendment” to section 230 which would bar online solicitation of children for sex.

“Free speech on the Internet…is vital to our democracy. It has protected your business model,” the letter reads. “Internet freedom, however, must not come at the expense of children who are sex trafficked.”

A Google spokesperson told the Observer that “we will continue to use our technology to combat the tragedy of child sex trafficking, will continue our significant funding of organizations that combat this crime and maintain our zero tolerance approach to ads for this illegal activity.”

EFF attorney Aaron Mackey said the organization did not support changes to section 230 because “it would make a wide range of content liable.”

“You can’t make that change and have it only impact problematic activity,” Mackey told the Observer. “We acknowledge fully that child sex trafficking is abhorrent and a serious problem. We are completely sympathetic to their concerns, but their proposed fix might undermine all speech platforms online, which are used overwhelmingly for good.”

Mackey suggested that finding and prosecuting the organizations which actually exploit minors would be a better way to curb Backpage’s activities without impacting online freedom. 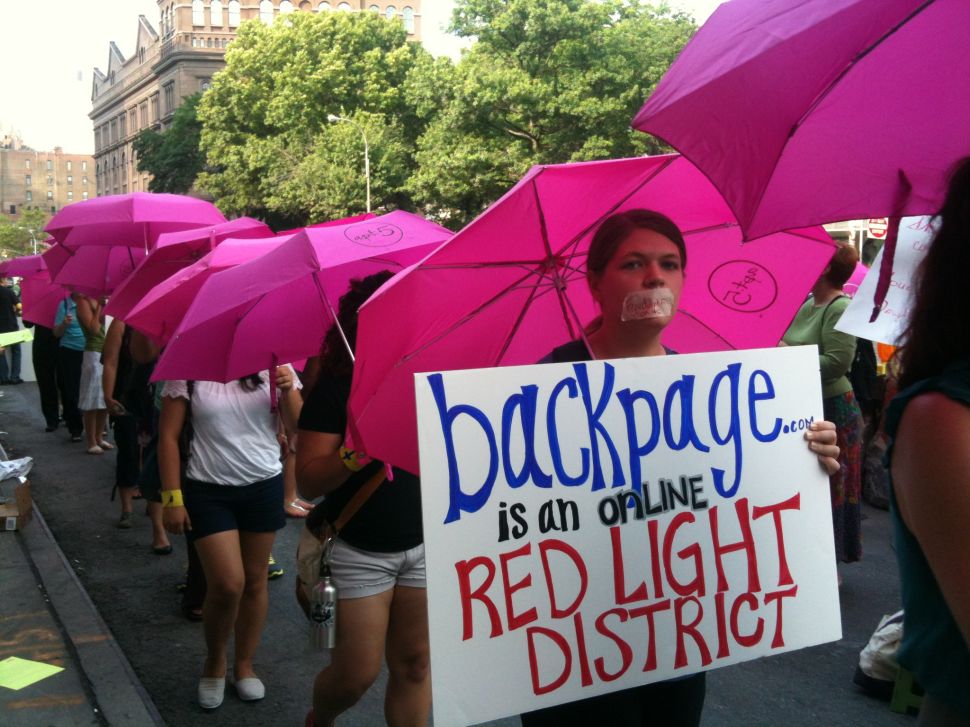