I will never, ever get sick of watching villains break into the Gotham City Police Department, a place that, after three seasons of Gotham, I have to assume is staffed primarily by a gang of toddlers who found a bag of police costumes one summer and ran with it. Jim Gordon and Harvey Bullock are the only adults that work there but are so bad at detective work they still haven’t noticed. In the world of Gotham, infiltrating the GCPD is the same thing as “infiltrating” a dressing room at Kohl’s. You just sort of ask politely and take a number. As a viewer, it is endlessly hilarious to me, every single time. I would kill for a spin-off workplace comedy in which the GCPD staff tries in vain to deal with all the threats to their offices, like untied shoe-laces, Girl Scouts trying to raise money for a field trip, and rainclouds. In the pilot, a stiff breeze blows the door open and 15 officers die. [Spoilers: in the finale the stiff breeze becomes Commissioner.]

Last night, Nathaniel “The Executioner I Guess” Barnes joined the ranks of GCPD-invaders, alongside The Electrocutioner (turned the lights off), The Maniax (used juggling as a distraction) and Victor Zsasz (asked politely). “All Will Be Judged” centered around Barnes, wearing a dope new costume I guess he just had from his years in college when he got big into LARP-ing, unleashed by Kathryn and hell-bent on making Jim pay for his crimes. Now, there’s some pretty obvious runtime-padding in the middle where Barnes captures Jim, but is foiled when Jim is like “before I die hand me my badge” and the psychotic hate-fueled mass-murderer is like “well yeah I guess we both were in the army.” But no, the absolute solid gold occurs when Barnes strolls into the GCPD, decked out in axes and body armor, and we hear a single voice rise above the commotion to ask “who is this guy?”

WHO IS THIS GUY? Not “stop or I’ll shoot,” not “hey I think that guy has grenades hanging from his belt,” but “who is this guy?” That is beautiful. Several times throughout the ensuing confrontation both Barnes and Jim refer to the station as a church, which is unfair, because I know of several actual churches with a better defense system than that station.

The hubbub at the GCPD was actually the culmination of several different storylines meeting in the middle. Alfred Pennyworth discovered not-Bruce is, in fact, not Bruce during an attack from Selina at Wayne Manor gone wrong. Selina gets whacked in the head with a fire-poker so hard she forgets how to be a decent human being, and Alfred compares her to her grifter-ass mother in a burn so savage I almost didn’t notice Sean Pertwee’s incredible pronunciation of the phrase “wonky con artist.” (I did notice though, and it was indeed *chef kiss*)

Meanwhile, Jim and Harvey are able to effectively piece together the Court of Owl’s entire secret operation thanks to a…detailed map of the Court of Owl’s secret operation. I mean, I’m not here to tell anyone bird-themed or otherwise how to run your shadowy Illuminati-cult, but maybe just don’t make that map. Yes, the map was disguised as a glass owl statue, but another strategy is to just, like, have no map. The only good that came out of the glowing owl statue story is that I believe we now have proof the President of the United States is in the Court of Owls. 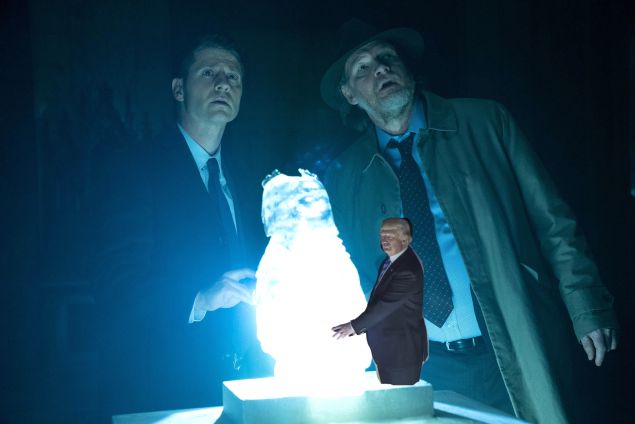 As mentioned, this all comes to a head inside the GCPD when Kathryn is brought in for interrogation, because in addition to several maps explaining their whereabouts the high-ranking Court members also have their addresses on public file. Alfred, lacking the capacity for any more wonky-based insults, simply drives a knife through Kathryn’s hand in an attempt to glean Bruce’s whereabouts. “I’m not a cop, am I?” he says. “I’m a butler.”

Unfortunately, at that same moment every Gotham City cop whose name doesn’t appear in the IMDB credits is incapacitated by Barnes’ knockout gas/standing up too quickly and getting lightheaded. There’s a brawl, much grunting and sweating is had, and in the end it’s Kathryn who ends up headless for daring to refer to what is clearly nonsense as “nonsense.” For his part, Barnes is taken into custody for a grand total of two seconds before escaping, presumably by giving the GCPD officers charged with guarding him a medium-level Sudoku to solve.

But that’s not all! You see, throughout all this hullabaloo Lee Thompkins has been trying to find peace with herself, and also maybe with the fact her ex-fiance shot her current fiance in the head to stop him from stabbing her in the neck. Tough stuff. She seeks counsel from an insane nursery-rhyme-obssessed felon in a paper machete top hat, natch, and perhaps unsurprisingly that leads Lee to inject herself with the Alice Tetch virus. I love, love that given the choice between accepting Jim Gordon as a good person and inserting poisonous monster-blood into her veins, Lee was like “Ehhhhhhhhhhhhhhhhhhhhhhh, let’s go monster-blood.”

It’s well worth mentioning that in-between the Court of Owls/GCPD fuck-a-palooza this episode actually belongs to Robin Lord Taylor and Cory Michael Smith. Eddie and Oswald were given the least to do here, and made the absolute most of it. I’d watch several more hours of the Riddler and Penguin passive-aggressively making death threats from adjacent jail cells, and then somehow even more passive-aggressively working together to escape said jail cells. “We help each other escape together, so we may be free to murder each other outside” is such a wonderful line, especially if you then flip through decades of Batman comics and imagine the seething invisible hatred happening between these two. Imagine how awkward it was to take this picture: 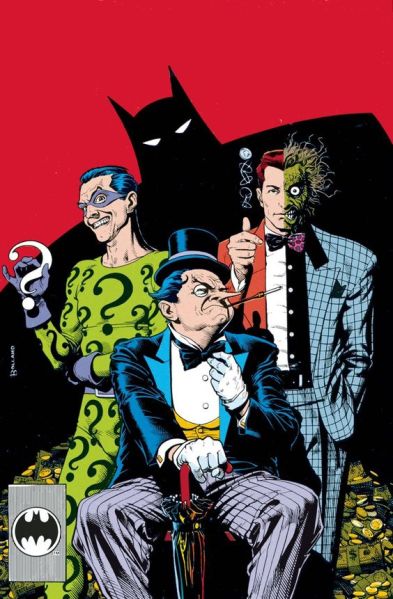 Although in this specific case I imagine Riddler and Penguin were united in telling Two-Face to shut the fuck up about starring in NBC’s Trial & Error.

As always, let’s run down every reference, fact, and nugget of Bat-history brought up in season 3, episode 19, “All Will Be Judged.”

I’ve always thought it was funny that Gotham‘s Talons look less like the hulking bird-monsters designed by artist Greg Capullo and more like a cosplay designed the one single person who enjoyed 2013’s The Lone Ranger.  But I can’t help notice that Barnes’ suit in the episode looks slightly familiar: 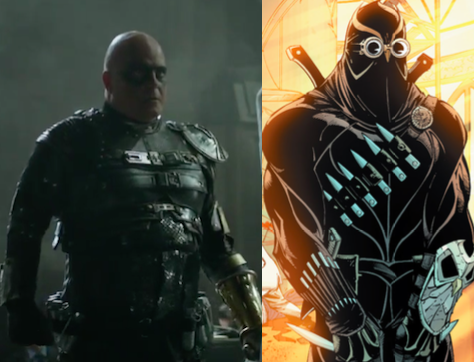 Not exactly the same, but a prototype, similar even to the early, makeshift Talon designs Batman finds in Batman #3: 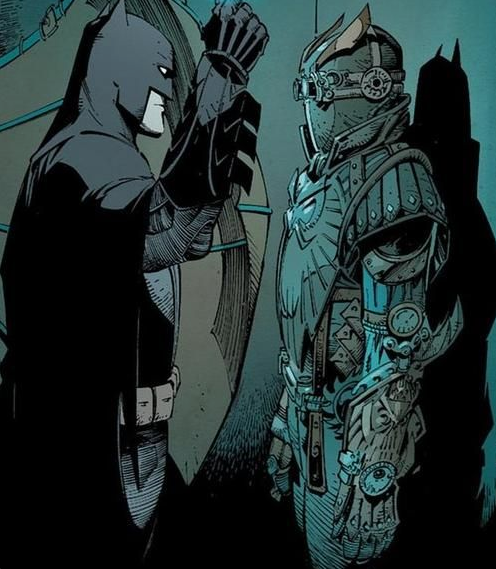 Barnes’ suit, mixed with the Shaman’s explanation to Bruce about the way Talons are made, makes me think this was the Court’s first shot at a Talon who, you know, won’t lose in a fist fight to Jim Gordon. 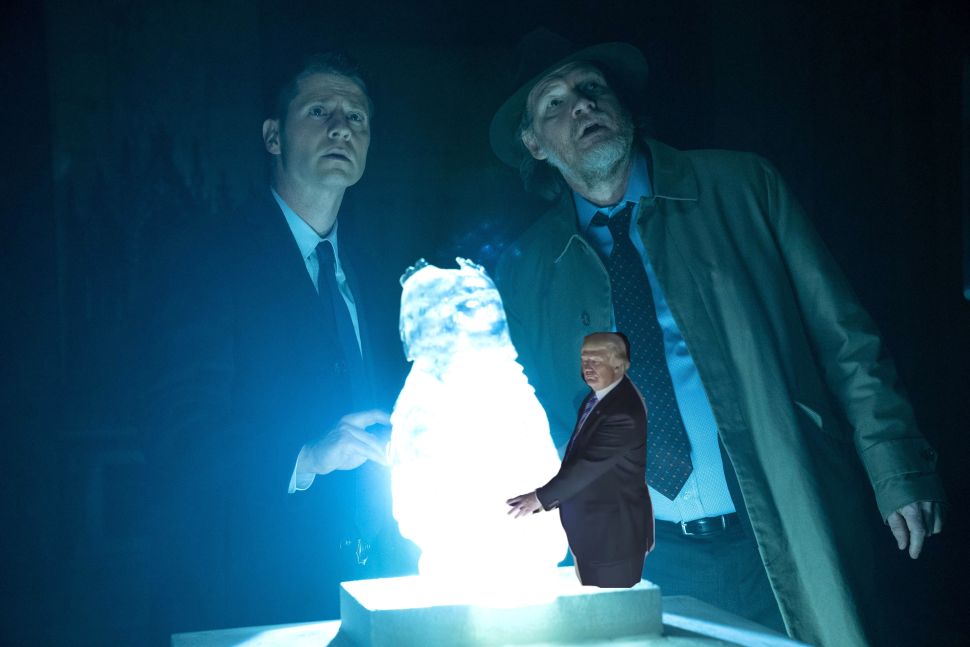