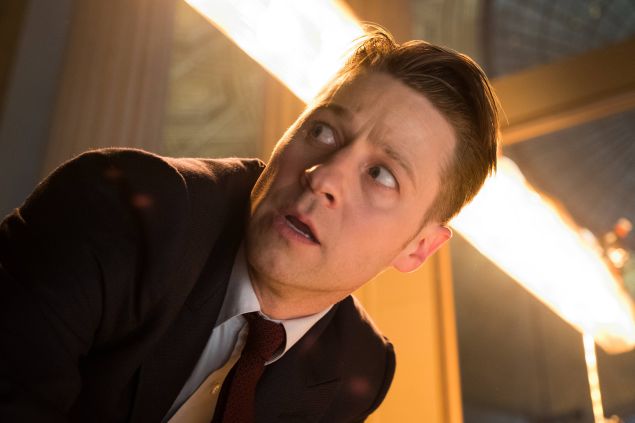 If Hugo Strange was a real-life, living, breathing human being I would still request that BD Wong play him on television. Until Steve Harvey becomes the Pope, there is not an actor-to-role combination better than Wong and Strange, except for maybe Wong and the transgender cyber-terrorist he plays on Mr. Robot. BD Wong owns, is what I’m saying here, and Gotham‘s Hugo Strange might be the most genuinely enjoyable character on television. If you cut out all the syllables Wong draws out in the most over-the-top way humanly possible as Hugo Strange, this episode would only be 14 minutes long.

Which is all to say that in last night’s Gotham, titled “Light the Wick,” Hugo Strange returned, along with…basically everyone, and I have a sneaking suspicion it’s because everyone thought they were about to be legit cancelled. But that didn’t happen! So we’re not only gifted with a truly explosive lead-up to the season 3 finale, but the returns of Wong’s Hugo Strange, Camilla Perez’s Firefly, Benedict Samuel’s Jervis Tetch and Michael Chiklis as Nathaniel “The Executioner” Barnes: 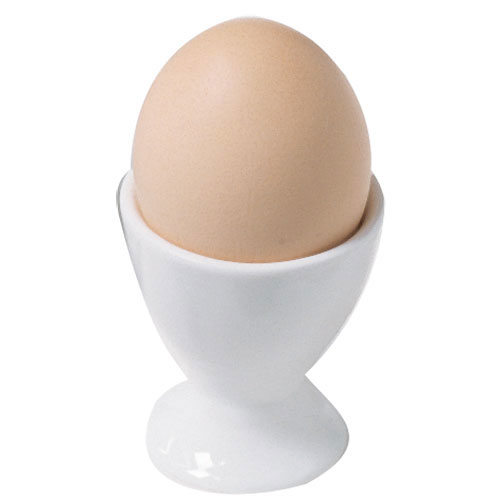 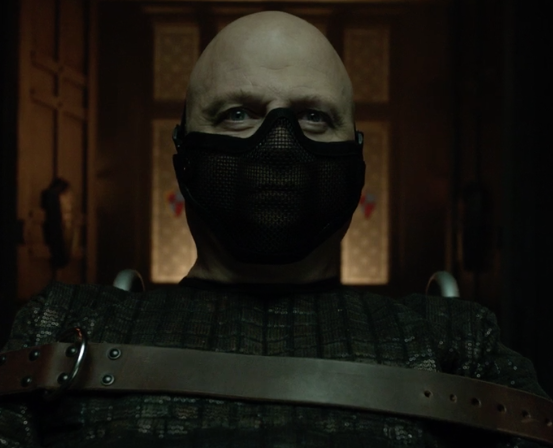 There we go! FOX

The Court of Owls, who will never NOT look ridiculous conducting *very serious* genocide meetings while wearing the masks they made in arts & crafts, nab Barnes from Arkham Asylum because they want the sweet, sweet Alice Tetch blood within his veins. Once they get it, Kathryn recruits Hugo Strange in creating a Tetch Bomb, a cloud of chemically-induced madness the Court plans to use in their great “cleansing” of the city.

Of course, Jim Gordon discovers all this through sheer happenstance and buffoonery, a.k.a The Gordon Method™. He breaks into Kathryn’s lovely uptown apartment—because the head of an ancient, secret society that pulls Gotham’s strings from the shadows just, like, has her address on file somewhere—and finds, well, nothing actually, besides a Wayne Enterprises access badge. Luckily(?) for Jim, Kathryn just sort of comes home and catches him, and instead of immediately sicking one of the Court’s owl-ninjas on him she says some vague nonsense about “showing the people of Gotham their darkest selves.”

Of course, based on that vague nonsense, Jim calls Harvey right outside Kathryn’s apartment like “GOT IT I KNOW THE WHOLE PLAN NOW.” I wish when they cut to Kathryn on her balcony she was like “I can fucking hear you.”

Meanwhile, everyone else is up to a whole lot of nothing disguised as a whole lot of something. Selina is in a coma after Not-Bruce threw her out a window, until Ivy revives her with some dank-ass plants. While Selina heads to Wayne Manor to enact some undoubtedly cat-themed revenge, the real Bruce Wayne is still in a mountain dojo going through the exact same training Arya Stark did in the House of Black and White on Game of Thrones, a.k.a. the Beat a Child With a Stick Method™. The Shaman (guest star Raymond J. Barry) insists Bruce can’t become an effective fighter until he lets his parents’ deaths go, but I don’t know. I’m no temple shaman, but I’m pretty sure effective fighters don’t flail this much.

Back in Gotham, Oswald comes to Jim looking for Edward Nygma and is NOT buying the idea that Jim simply lost a criminal. “Escaped? From the great Jim Gordon,” Oswald says, prompting me to laugh out loud for an uninterrupted 25 minutes because holy shit the number of people that have simply walked out the front door of the GCPD is higher than the actual GCPD’s employee roster. But nevertheless, Oswald gives Jim a phone, and expects a ring from the Court of Owls by mid-day.

Unfortunately, Jim has other things on his mind. Kathryn decides to test his worthiness by making him watch the Court Tetch-Gas the Gotham City Met Gala. Jim calls Oswald, puts the phone on speaker, and proceeds to hold his own in a fist fight with a dude who killed a warehouse full of gangsters with a samurai sword two weeks ago. Oswald and Firefly traverse the entire span of Gotham City in less than three minutes, just in time to send Talon flying through a window to his fiery death. You may have a 99.9 percent chance of being murdered by a specific-themed villain in Gotham, but apparently, the public transportation is dope.

We end “Light the Wick” with “only two episodes left until the two-part finale” (so…four episodes?). Jim’s cover is blown, and Kathryn officially sets Barnes loose to pass judgment upon him (that means beat until dead with his hands). Oswald finds himself in Court-custody, face-to-non-hallucinated-face with Nygma. Special shout-out to Robin Lord Taylor’s stellar dead-eye acting, a rare case of Gotham going for subtly instead of, you know, immediate bazooka shell to the dick non-subtly. 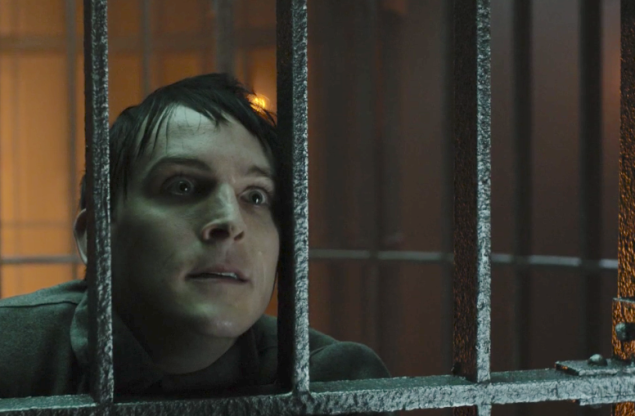 As always, let’s run down every reference, fact, and nugget of Bat-history brought up in season 3, episode 18, “Light the Wick.”

When Ivy visits the club to get answers from Tabitha Galavan, the band in the background is performing a cover of T. Rex’s “Bang a Gong (Get It On),” which I point out for no other reason than the fact Batman straight up keeps an animatronic T-Rex in the Batcave. 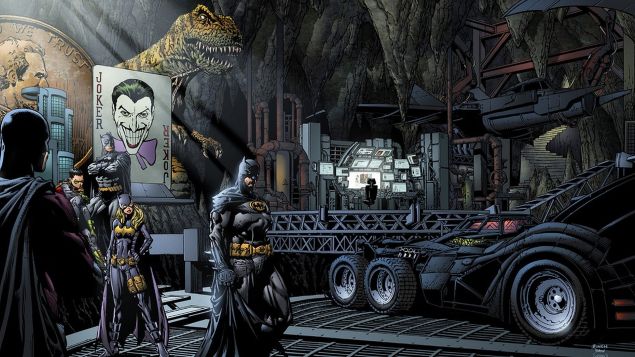 “Rexie” is a souvenir from the time in the 1940s that he and Robin fought crime on an island of dinosaurs. This happened much more frequently than you’d expect in the 1940s.

The plant Ivy uses to revive Selina is named “nepeta cataria” or as it is commonly known…catnip. So yes, when Catwoman comes back from a deep coma it is because she’s tripping balls.

Kathryne’s address, 450 Monroe Street, is…not actually a reference to anything specific. But it DOES give me an excuse to talk about Batman #450, written by Marv Wolfman and illustrated by Jim Aparo, which marks the first appearance of one Batman’s best little-known villains: Curtis Base, or Joker II. Any by best I mean the fucking worst. 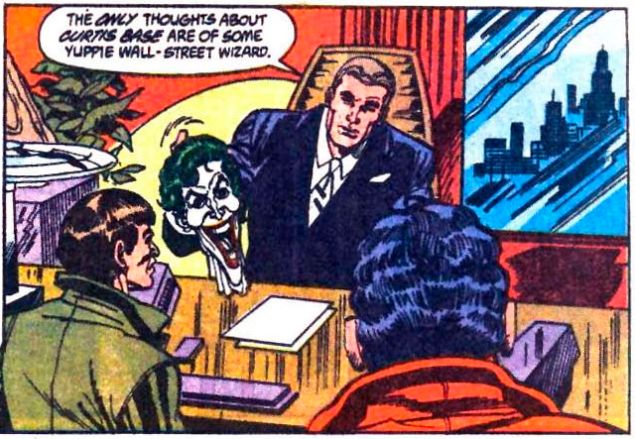 Base was a corrupt businessman who decided working Wall Street wasn’t enough crime, so he decided to turn to actual villainy. Because The Joker was “dead” at the time, Base started to dress like him to commit Joker-esque, gag-themed heists. This came to a head when the real Joker returned, called Base on his bullshit, and the faux-Joker jumped into a vat of chemicals in an attempt to replicate the Clown Prince of Crime’s origin story.

Accept instead of becoming the Joker, the acid just burned him to death. The end! 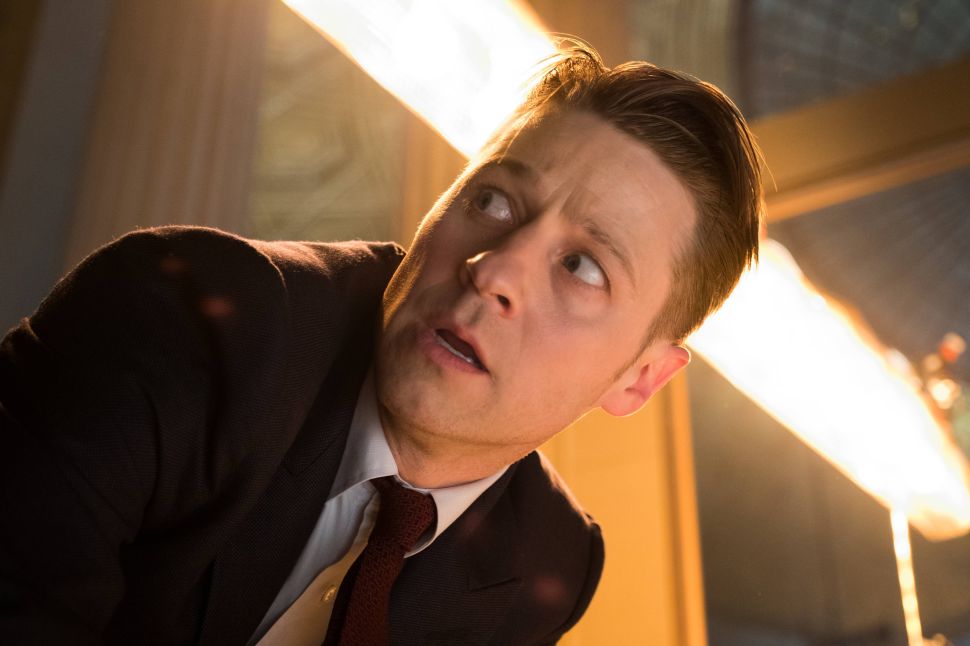