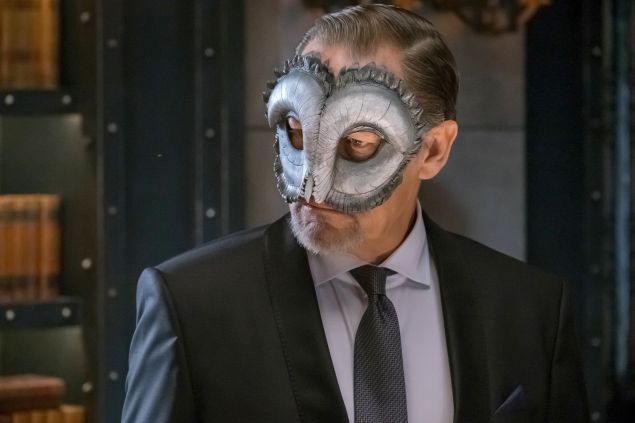 Last night’s Gotham, entitled “These Delicate and Dark Obsessions,” marked the directorial debut of ol’ Jim Gordon himself, Ben McKenzie, an effort I have to assume was made a little easier by the fact Ben McKenzie definitely already had this shot of himself loaded into his personal camera for years.

So much like last week’s DeerGate dilemma, I can’t get around to discussing what was quite a good Gotham episode until I point out one particularly irksome bugaboo (also, “Gotham: One Particularly Irksome Bugaboo” would only be a slightly less ridiculous episode title than “These Delicate and Dark Obsessions,” but I digress). Jim Gordon, using his trademark detective technique of “I’ll just ask Leslie about it when she gets in or whatever,” discovers the drunk driver who killed his father, Michael Ness, had “chronic, persistent hepatitis.”

But that can’t be, says our loveable and sure to die young alcoholic Harvey Bullock. If one has hepatitis that is both chronic and persistent, two words that literally mean the same thing, one can’t drink alcohol. And if one can’t drink, one cannot kill your father in a drunk driving insistent. It’s a cover-up, see, a flim-flam, a whoziwhatzit, all orchestrated by the Court of Owls. Yes, that’s correct: the all-knowing, all-seeing, Illuminati-esque shadow organization that has run Gotham City from behind the scenes for centuries set up a fake drunk driving accident, and they used perhaps literally the only person in Gotham who cannot drink alcohol to do so.

Well…that was dumb of them, right? I could even buy the fact that no one in the GCPD or Gotham’s hospital circuit noticed a man with hepatitis was sent to jail for driving under the influence; “corruption” in the world of Gotham is like “the Force” in Star Wars. It explains away pretty much anything. But this show is setting up The Court of Owls as the Court of Motherf*cking Owls. They’re everywhere. They cannot be stopped. They are an insidious, omnipotent presence that also made such a kindergarten-ass botch-job planning the murder of Jim Gordon’s father that everything they do now seems 100-times more silly than intimidating. These bird-mask-wearing octagenarians straight out of the shitty True Detective season 2 orgy cult went and framed a dude who would die if he drank alcohol for a drunken car accident, my goodness. That’s like kicking someone to death then framing a guy with no legs.

Outside of the Court Of Owls’ planning committee pulling a total assassination boner, this episode was a delight and a brutal one at that, managing to balance a murder via garden rake and several gunshots to the head with a surprise decapitation that was way too graphic for FOX’s 8 PM timeslot. But perhaps Gotham has simply stopped giving a bat-shaped fuck, which results in the best, often bazooka and/or balloon themed Gothams of all. After all, the powers that be handed an entire episode off to an actor making his directing debut, and surprise, surprise the homey Jim Gordon didn’t revolutionize the cinematography game but he did pull stellar performances from the entire cast.

Starting, foremost, with himself; Jim Gordon’s storyline took the midnight train from his uncle’s sketch cabin in the woods back into the thick of it, as Gotham City’s premiere gritted jaw with legs worked to discover the secrets of his family’s connection to the Court of Owls. Turns out, it was Uncle Frank who ordered the hit on his own brother all those years ago. When Jim arrives on the scene and is all like “but why would you frame the guy with hepatitis for a drunk driving incident,” Uncle Frank is like “you’re right that doesn’t really make sense” and shoots himself in the head. Or, you know, something very similar to that.

Jim does learn a good deal about the Court before his uncle offs himself, though; their inner council voted to bring a weapon into Gotham–a move Uncle Frank show hesitancy toward through his hesitant feather dropping–in order to cleanse the city of crime, something they’ve already done twice in the past. Which…is that just a known fact? Have the citizens of Gotham became so complacent with their 99-percent chances of being shotgunned in the face every time they go get their mail that they don’t even blink over the two separate times their city was completely and utterly destroyed in Owl-themed hellfire? Are there any very old and very white Gotham citizens who remember the time some bird-mask-wearing monsters, like, descended from the sky and melted all the unworthy and think those were “better times #MGGA”? I mean, probably, right?

Either way, Jim calls in his first of two ex-fiancees, who is now calling herself Barbara Queen I assume out of vanity but also possibly because she married Green Arrow in-between episodes. 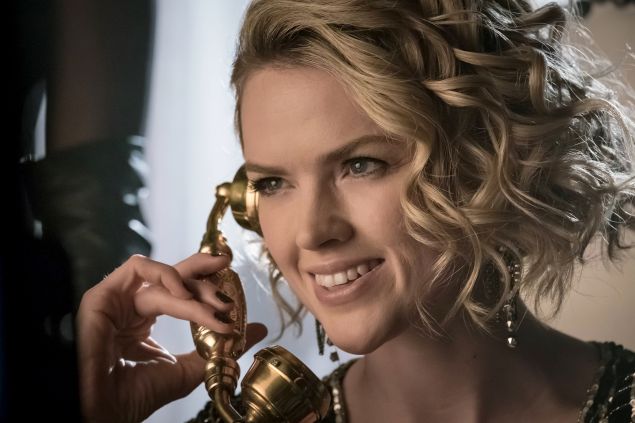 It’s an honest-to-goodness miracle how entertaining Erin Richard is as Barbara, considering that character began her Gotham career as a literal stone statue I kept thinking the crew left on set by accident. And the scene in which The Court of Owls’ Talon wandered in from an Into the Badlands episode and slaughtered Barbara’s entire crew was peak *Swedish Chef kiss* ridiculousness. It had the holy trifecta of a perfect Gotham sequence: 1) It made very little logical sense, 2) It was unnecessarily violent, and 3) It heavily involved the use of a samurai sword.

Surprisingly, there’s more charm to be had over with the recently-revived Oswald Cobblepot and Ivy Pepper, despite the fact Maggie Geha is still playing a magically-aged little girl so that the Gotham writing staff can sleep soundly at night. But no, I enjoyed this; Gotham is a show with the consistency of a blind man in a batting cage, but one thing it always nails is having two iconic Batman characters just exist toward each other. I’m but a simple viewer. Watching a not-yet-Poison-Ivy pheromone-hypnotize some goon with her perfume like it’s the most natural thing in the world so that Oswald Cobblepot can violently lash out with a gardening tool over the word “freak” because he is equal parts crippling insecure and aware that, consistently climbing the crime ladder or not, he will always on some level be the umbrella boy…well, that’s the only type of character work I’m asking for here.

Meanwhile, over in Bruce Wayne’s Himalayan vacay, Gotham offers exhibit #1400 of Thomas and Martha Wayne being murdered on-screen. But! We’re actually seeing it happen in Bruce’s mind, courtesy of a Shaman who is definitely not played by Scott Glenn but definitely should have been. For someone who is imprisoning a teenager in a mountain jail cell for the Court of Owls, this dude doesn’t seem too into the Court of Owls himself; he seems much, much more interesting in training Bruce Wayne in the art of…something. “If you were to become a symbol,” he tells Bruce, “a symbol against fear, then Gotham can be reborn.”

I think he means Batman.

As always, let’s run down every reference, fact, and nugget of Bat-history brought up in season 3, episode 16, “These Delicate and Dark Obsessions.”

The broth that Oswald promptly spikes to the ground like a Young Pope holding a baby contains, according to Ivy, some “White Willow” for his fever. White Willow is also the name of a character who first appeared in Batgirl #68 and then promptly died in Batgirl #71. Willow was a member of Nyssa Al-Ghul’s off-shoot League of Assassins and served mostly as a reminder that there is no limit to a comic dudes’ idea of a proper amount of cleavage. 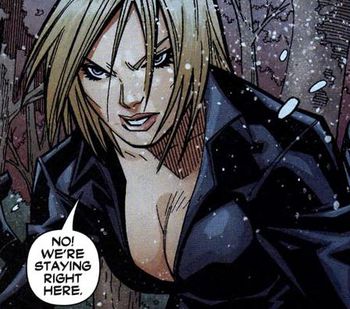 The Court of Owls’ express shipment from Indian Hill arrives at Gotham City’s “Dock 9C.” Related, here is the third variant cover for Batman Volume 2, Issue 9…or, if you will, cover 9C. 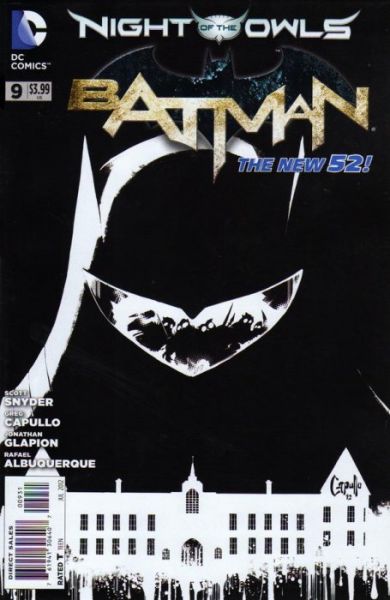 “Nigh of the Owls” was a cross-over storyline in which the Court, similar to what they’re doing in Gotham, flooded the city with a night of mayhem and murder in an effort to regain complete control. What’s interesting about this specific issue is that it revolves around the Court infiltrating Wayne Manor–here it’s with brute force, where on Gotham it’s through cloning and shepherd’s pie–interspersed with narration from Bruce Wayne detailing the efforts of his ancestors to purge the caves under the house of bats. The lesson, in the end, which is important to keep in mind while Gotham keeps Bruce trapped in a faraway cell, is that the bats always came back, baby. 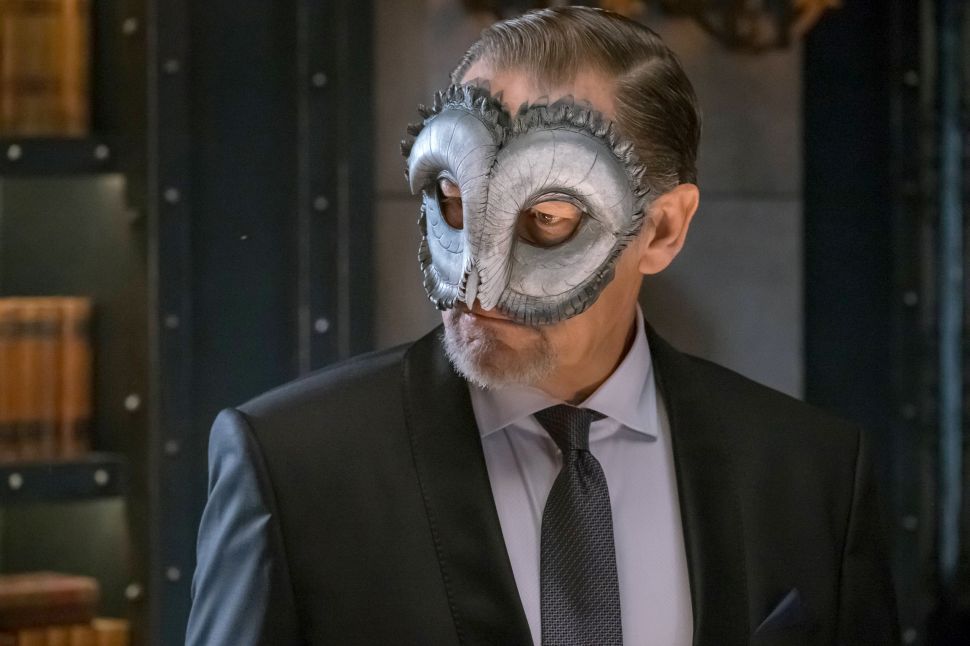