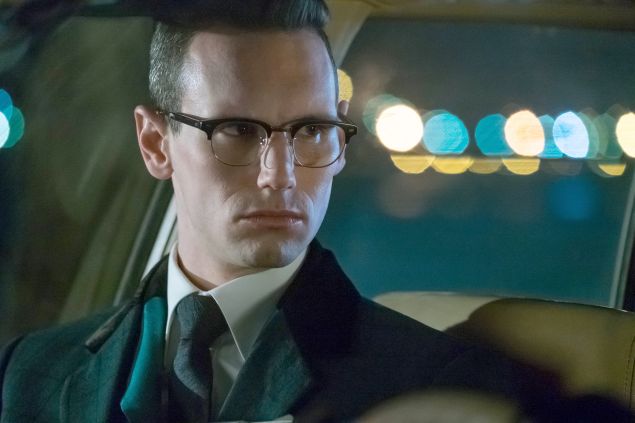 Allow me to get sentimental for a moment within the confines of a Gotham recap, space I normally use to make jokes about Batman going through puberty and to point out the above-average size of the incredibly talented Michael Chiklis’ head. Like, 90 percent the Michael Chiklis thing, if I’m being honest. But no, today I’m thinking about how long I’ve watched this wonderfully dumb slice of nonsense set within the DC Universe; how I wrote about the very first episode, and roughly ten billion words on it ever since, including recaps, reviews and the time I like to think in a small way I helped Oswald Cobblepot admit he loved Edward Nygma. So, naturally, my favorite part of last night’s genuinely bonkers episode, “The Primal Riddle,” wasn’t Oswald and Ivy’s sojourn to Mr. Freeze’s arctic hideout, or Barbara Keane smashing a champagne bottle against some random waiter’s noggin, or even Bruce Wayne’s clone dropping Selina Kyle from a window like a bad Berry. My favorite part was Eddie Nygma and Jim Gordon sitting in a car, discussing a time they shared before things got truly, truly strange:

Gordon: “I tried like hell to get out of it. Lee insisted. The truth is I had a good time. I considered you a friend.”

If it’s one thing Gotham has consistently been for three seasons it’s an upward trajectory into Batshit Crazyville, always escalating its characters into weirder, more intense places. Nygma started as a socially awkward lab tech with a damn question mark Sharpie-d onto his coffee mug, and now he’s appearing on TV in a dark-green suit-and-bowler combo to threaten Gotham City with ominous wordplay. Jim Gordon, once so moral and virtuous Ned Stark was like “loosen up, bro,” has since cycled through two fiancees—one who hates him with a passion, the other running the city’s criminal underground—and cozied up to darkness so often he basically has a running tab in the underworld. Oswald was an umbrella boy, Bruce Wayne a jello-soft billionaire, Barbara an often-pantsless housewife. Fish Mooney was a thing! As the opening credits to a terrible film version of DC’s most influential comic say, “the times they are a’changin.” In Gotham, they’re always a’changing, and the most important thing to remember here is that even as Jim Gordon tells Edward Nygma he considered him a friend, Nygma has a gun pointed right back. “What good are friends anyway?” he responds.

In the case of Selina Kyle, the answer is not very good.

Poor Not-Bruce is having trouble with his rapidly-ending life. He’s growing close to Alfred (understandable!), reaching out to Selina for a chance at friendship (aw!), and then literally reaching out to Selina to shove her through a window, seemingly to her death (but probably not!). If there’s any hard-and-fast rule to comic book storytelling it’s that there is no death that cannot be reversed, ever. Ever! And that’s people who aren’t unhealthily obsessed with cats, because, you know, something-something nine lives or whatever. Selina will be back, and returning from actual death-by-concrete-splatter typically puts you in the admittedly ill-defined category of “freaks.”

Luckily, someone important is currently in the market for an army of those. 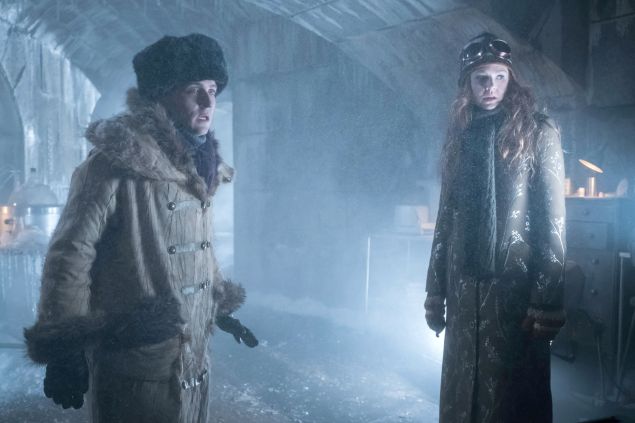 It is infinitely hilarious to me that the first two recruits Oswald goes searching for are the two that immediately cancel each other out on a physical level; Mr. Freeze and Firefly. That’s like hiring a supervillain with slug powers along with a guy who, like, shoots salt from his fingers. Or, even stupider, framing a drunk driving accident on a person who literally cannot drink alcohol. Imagine being that dumb?

But not, this is great; I love that both Victor Fries and Bridgit Pike were just hanging in themed locales waiting to become supervillains, and I extra-love that Gotham is on course to end season 3 (and possibly the series itself) with a capital-S Showdown. Oswald is back home with an insane vaguely-bug-shaped arsonist and a deeply-depressed ice sculpture, gunning for Edward Nygma. Who, I must stress, is in GCPD custody, A.K.A. being held in a police station where the walls are literally made of swiss cheese and optimism. Barbara’s pissed, Tabitha’s pissed, Butch is sweaty yet scheming and everyone, everyone wants to know just what the heck the Court of Owl’s deal even is. Jim Gordon, having infiltrated the world’s most gullible shadow organization, is about to find out.

Like I said, a Show comma Down, people. The only thing missing is the real Bruce Wayne, who is off learning Transcendental Meditation with David Lynch. I hope he shows up in the finale and he’s just, like, played by Christian Bale now.

As always, let’s run down every reference, fact, and nugget of Bat-history brought up in season 3, episode 17, “The Primal Riddle.” 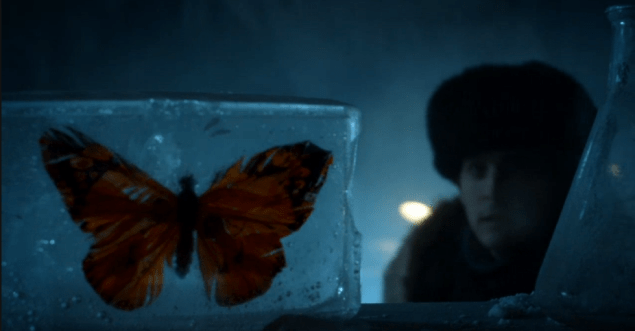 I’m just going to assume the butterfly in Victor Fries’ ice cave is of the classification Prosotas nora, because dude has a habit of keeping Nora’s on ice. Also, I must, must single out the fact that Fries said this phrase to Firefly: “You’re a little hot. Maybe you need to cool off!”

Cold pun! He made a cold pun! It was terrible! And that’s fine, because we all know he has years to perfect his craft.

I’m sorry this is not a reference of any kind, I just find it endlessly funny that under a front page story about a riddle-obsessed madman robbing three banks in one night, someone gave equal space to the headline “Traffic An Issue.” 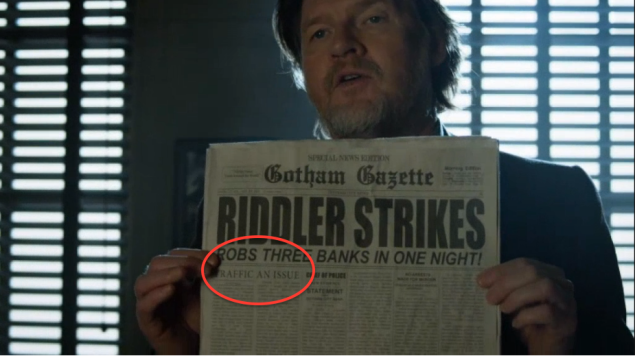 The question that Hugo Strange told Nygma to ask Bruce and Lucious in season 2’s finale, the one that Kathryn claims has “haunted” Nygma ever since, was a simple one: “Who runs Indian Hill?” More and more, it looks like the answer to that question will be the capper on Gotham season 3. Personally, I have two guesses: 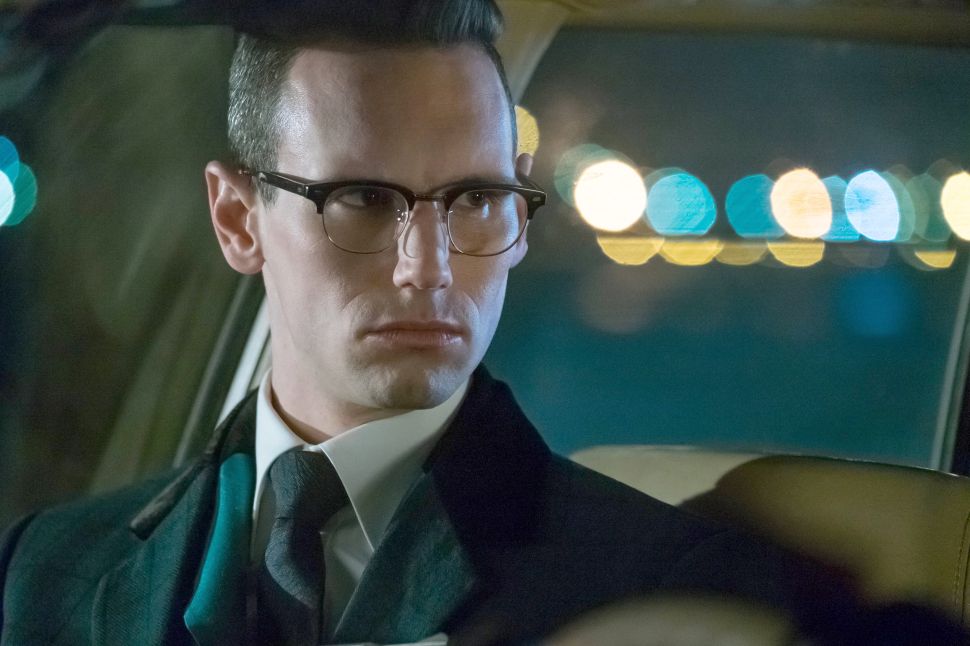