On January 28, 2014, political consultant Bill Cortese and his client, then-Congressman Michael Grimm of Staten Island, parted ways in Washington, D.C. following an afternoon of meetings. Cortese was headed back to New York City, Grimm was on his way to the State of the Union address.

A few hours into his drive home, Cortese’s cell phone began to light up. He pulled over to the side of the road, and watched the video clip that had already proliferated across social media and would soon surface on the Daily Show and late-night television: NY1 reporter Michael Scotto had asked Grimm about the recent arrest of one of his fundraisers during a post-speech interview on the Capitol rotunda.

The irate representative had stormed off camera, only to storm back seconds later—with a threat.

Republicans in the Capitol panicked. But that Friday, as Cortese and Grimm left a pizzeria on Staten Island, a man recognized the congressman on the street and walked up to shake his hand.

“It was kind of shocking to hear that. But clearly the response wasn’t the same in the district as it was in Washington,” continued Cortese, now a principal at Warwick Strategy Group, a public affairs and “crisis communications” firm.

That November, despite the federal indictment that broke his career just months later, Grimm routed his Democratic challenger by almost 13 points—his biggest victory ever.

The asphalt-latticed subdivisions and thickly-clustered houses of New York’s 11th Congressional District could hardly seem farther from the broad skies of Montana. But last night, those skies witnessed another brutal encounter between a Republican politician and a journalist.

According to news reports and audio recordings of the incident,  businessman Greg Gianforte—the GOP nominee in the special election for the state’s at-large House seat—threw Guardian reporter Ben Jacobs to the ground and struck him repeatedly when asked at a volunteer event about the Congressional Budget Office‘s assessment of the American Healthcare Act.

Today, as voters trickled to the polls, authorities charged Gianforte with misdemeanor assault. His official statement was as unrepentant as the initial reaction from Grimm’s office in 2014, when the congressman blamed Scotto for taking “a disrespectful and cheap shot.”

“It’s unfortunate that this aggressive behavior from a liberal journalist created this scene,” Gianforte’s campaign said.

The question for today is, will it matter?

In between Grimm’s clash with Scotto and Gianforte’s attack on Jacobs was the vitriolic 2016 campaign for president, in which insurgent candidates on both the left and right assailed the press as their enemy. Then-candidate Donald Trump routinely denounced journalists as “scum”—and in April of last year, his campaign manager Corey Lewandowski forcefully grabbed Breitbart reporter Michelle Fields as she attempted to ask the mogul a question after a rally in Florida.

“Clearly what the president has done, and what some other people have done, is made the media into a kind of boogeyman,” said Cortese. “We’ve seen these types of things, and it’s not necessarily fatal.”

Despite the vast continental distances between them, Cortese—who worked on the National Republican Senate Committee’s unsuccessful 2012 attempt to oust Montana Sen. Jonathan Tester—argued Montana’s one congressional district and New York’s 11th share a bipartisan, personality-driven political culture. Voters in the former re-elected Democratic Gov. Stephen Bullock last year even as they overwhelmingly turned out for Trump, just as residents of the latter supported a second term for Democratic Gov. Andrew Cuomo in 2014 while casting their ballots for Grimm to return to the House.

“Politics in Montana continues to be very much retail politics,” he said. “There’s also a likability piece of that as well: who’s got the disposition or the demeanor, the sort of neighborliness people expect.”

But on the other side of that friendly, folksy decorum stands a fierce defensiveness of one’s personal rights and property.

“What I think the expectation is in Montana is that people will start out by being sort of deferential and respectful of one another, so long as that deference and respect is earned,” Austin said. “But if you’re threatened and somebody invades your space, you’re going to stand up for yourself, pretty aggressively, even.”

“So much of the discussion I’m seeing on social media right now sort of hinges on that question: ‘did the reporter cross the line and justify that kind of response?'” the political science professor continued.

Some of the resentment and contempt for the media prevalent among Grimm and Trump’s core supporters exists in Montana too. But Austin argued that sentiment is strongly concentrated among voters already entrenched in Gianforte’s camp.

What will determine the election’s direction, he said, is whether the Republican’s behavior spurs more backers of Democrat Robert Quist to show up at the polls, or causes a few weakly attached GOP voters to cast their ballots for Libertarian candidate Mark Wicks.

A Pew Research Foundation study released earlier this month would appear to confirm Austin’s observation about attitudes toward the press. The polling group discovered the largest divergence on record between Democratic and GOP opinions on the Fourth Estate’s role in society.

Almost 90 percent of blue spectrum voters agreed that the media serves as a valuable watchdog, and guards the public against political malfeasance.

Only 42 percent of Republicans agreed.

Pew found a similar partisan split on other questions about the press, although negativity prevailed on both sides. Of Republicans surveyed, 87 reported believing that the media favors one party over the other—only 53 percent of Democrats professed the same view.

And while only about a third of Democrats considered the news media trustworthy and effective at keeping people informed, only 11 percent and 18 percent of GOP voters answered those respective questions the same way.

But do those dim opinions of the industry mean that most Republicans will excuse—or even approve—when political leaders threaten or even assault reporters?

Perhaps the crucial difference between Grimm and Gianforte’s fortunes will be the timing of their outbursts. Grimm had 10 months before the polls opened to let the memory of his confrontation with Scotto mellow.

Gianforte body-slammed Jacobs on the eve of the referendum—but also, thanks to early voting, after the majority of ballots had already been cast.

“Whatever difference it will make, it’s going to be around the margins,” Austin predicted. 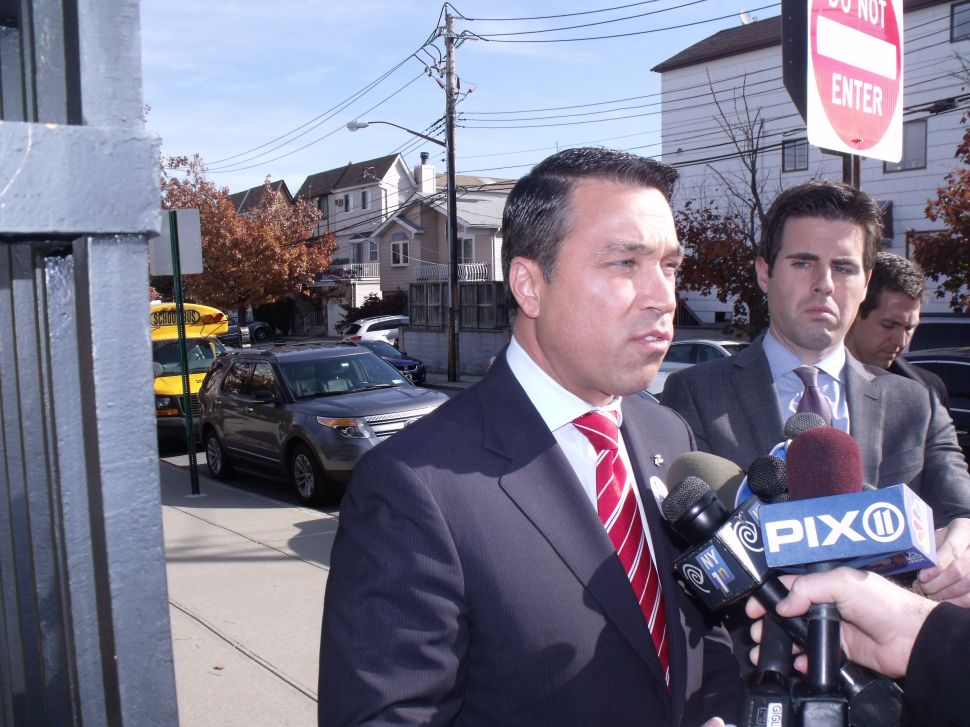