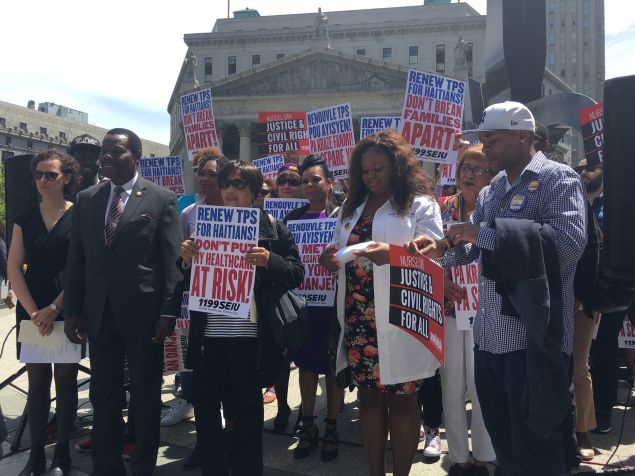 Haitian and non-Haitian elected officials and advocates for immigrants rallied in Foley Square yesterday afternoon to call on President Donald Trump and U.S. Department of Homeland Security Secretary Gen. John Kelly to allow 50,000 nationals from Haiti—including 22,000 living and working in New York City—to remain in the United States as Kelly is set to make a decision on whether to extend their Temporary Protected Status by early next week.

Last month, U.S. Citizenship and Immigration Services recommended that the United States terminate the Haitian immigrants’ TPS, which offers deportation immunity and work authorization to arrivals from countries enduring an armed conflict or natural disaster. The agency argued that the conditions in the Caribbean island have sufficiently improved that refugees can safely return.

But Haitian leaders and advocates asserted on Tuesday that the aftershocks of the 2010 earthquake, the subsequent cholera epidemic and last year’s Hurricane Matthew have rendered Haiti an unsafe place to return to—and Brooklyn Councilman Mathieu Eugene, the first Haitian-born official elected to the New York City Council, suggested that extending TPS for Haitian migrants would benefit the American economy.

After the 2010 earthquake, USCIS established TPS for Haitians living in the United States to allow Haiti to start the recovery process and offer support in the form of remittances to family members there. Those who arrived after 2011 were ineligible. TPS has been renewed for Haitians multiple times and is set to expire on July 22.

A DHS spokeswoman confirmed to the Observer that Kelly has to decide by May 23 to allow 60 days for formal notification through the Federal Register, the daily publication for rules, notices of federal agencies and organizations, executive orders and other presidential documents.

“Secretary Kelly hasn’t made a decision on TPS for Haiti,” the spokeswoman said. “The Secretary’s decision will be based on a thorough assessment of the conditions in the country. Separately, he has asked the staff for detailed information to increase his understanding of how the program operates.”

In February, Brooklyn Congresswoman Yvette Clarke, co-chairwoman of the House Carribbean Caucus and the daughter of Jamaican immigrants, introduced a bill that would significantly expand the TPS program to include all Haitian nationals who were in the United States before November 4, 2016.

Dr. Natacha Pierre of the Committee of Interns and Residents, a house-staff union that is a local of SEIU, said that through her union, she received a grant to go to Haiti in March for two weeks to assist people in the rural area of Haiti.

She said that the situation in Haiti is still “very, very dire” and that even though the cholera outbreak has largely been contained, it is “still a huge problem in other areas of Haiti.”

“The one thing that I did see as a pediatrician there in Haiti, one of the biggest things that devastates—especially in the rural areas, in the countryside of Haiti right now—is malnutrition and infectious diseases,” Pierre said. “Those are things that…are preventable in the United States but unfortunately in Haiti, malnutrition is a huge, huge issue.”

Brooklyn Councilman Jumaane Williams, a first-generation American of Grenadian descent, said that it is “unfortunate” that they are still fighting for TPS given that it is a “humanitarian issue,” but said that he does not “think it’s by accident.”

And he said that advocates have had to battle for their causes prior to the nativist, nationalist Trump administration, alluding to deliberate “forces trying to make us believe that Haitians and Haiti are less than.”

“We were led to believe that this country was less than it was, one of the most—at one time—richest countries in this hemisphere and I believe that is many people led us not to understand the history of Haiti,” Williams continued. “As a black man, I always thank Haiti for my freedom, the first people to free themselves of slavery. Imagine having to pay your slaveowners back for your own freedom.”

Harold Miller, deputy commissioner for the Mayor’s Community Affairs Unit, said that the city will conduct outreach efforts at subway stations about TPS for Haitians today between 7 am and 9 am, particularly in the heavily Caribbean-American neighborhood of Flatbush, Brooklyn. Miller suggested such a push was part of a larger fight for all immigrants.

“We’re not gonna back down, we’re not gonna give power to the Trump administration or anybody else, we gotta protect immigrants everywhere in this country and especially to folks who receive Temporary Protected Status for natural disasters beyond their control,” Miller said.

This story has been updated to include a comment from the U.S. Department of Homeland Security. 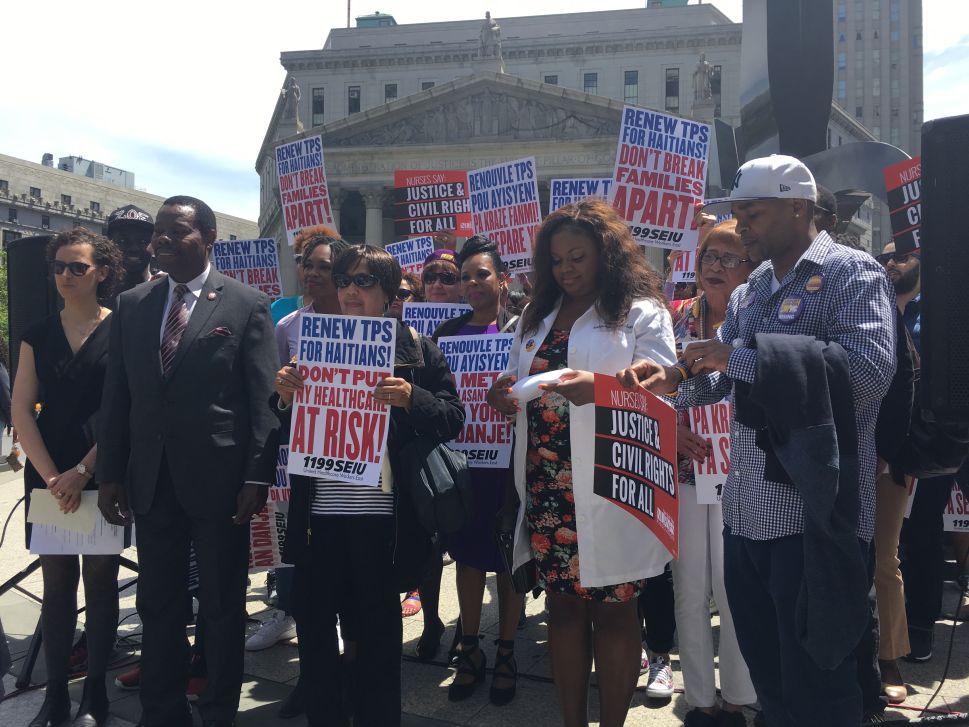