When Americans see a bearded Iranian cleric wearing a turban and raising his hands in triumph, it is normally not a good thing. But Hassan Rouhani’s reelection means that Donald Trump has a partner he can work with to either improve the nuclear deal or design a new one.

Throughout the campaign season, American pundits remained convinced that the race would be too close to call. Interviews on NPR included supporters of Rouhani, backers of his hardline opponent conservative Judge Ebrahim Raisi, and those too afraid to tell Western media their preferences (Raisi’s allies seemed poised to intimidate those not following the conservative line.) As a judge, Raisi supported death sentences for dissidents and protesters.

In the end, Rouhani bested his hardline rival, garnering 57 percent of the vote. In addition, Rouhani’s party completely swept the council elections in Tehran.

Why Iran’s Election Matters for Americans

Why does this matter for America? Because the United States can do business with Rouhani.

Four years ago, the Iranian moderate cleric stunned a host of conservative candidates by winning outright, without the need for a runoff. He pledged to replace the hardline policies of Mahmoud Ahmadinejad, who incurred the ire of the world with his bombastic policies, threatening to “wipe Israel from the face of the earth.” Ahmadinejad also unleashed his Iranian Revolutionary Guards to wreak havoc internationally through support of terror groups like Hezbollah.

Both events led the United States, Western Europe, and other great powers to tighten sanctions on Iran, crushing the country’s economy already weakened by Ahmadinejad’s ineffective populist policies. Even Russia and China refused to play ball, charging a higher price to Iran for doing business with a pariah. No wonder Iranian voters chose to punish hardliners at the polls. Ahmadinejad performed so poorly in office that even the conservative Guardian Council blocked him from trying to make a comeback this year.

Rouhani’s romp is also a win for America’s Iraq policy. He has given plenty of support to the regime of Prime Minister Haider al-Abadi, the regime the U.S. supports in its battle against ISIS in Mosul.

Should Donald Trump make a new deal with Iran?

Excited about the prospect of a friendly partner, former President Barack Obama might have been a little too eager to get a deal. Both leaders were able to negotiate one and get it passed by their respective legislatures, but critics on both sides complained that the other side won.

Donald Trump’s election seemed to doom the deal, but Secretary of State Rex Tillerson said Iran was generally complying with the deal (mostly). Well, at least Rouhani’s forces were. The Iranian Revolutionary Guard Corps (IRGC), aligned with Ahmadinejad, has done everything to short-circuit the deal, and Raisi campaigned against it. The lifting of international sanctions has been slow due to the economy being weakened by punishing limits on trade with Iran and years of Ahmadinejad’s mismanagement. And judges like Raisi still block freedoms as best as they can.

There are those who fear that forcing a new deal might upset this delicate plan, but there’s also an opportunity here as well. First of all, Rouhani’s entire plan involves opening up to the West, so pushing for pacts is a good thing for the Iranian president. A deal with America only strengthens him, and his moderate allies are beginning to dominate the Majils, the elected legislature in Iran.

Secondly, while a good start, the nuclear deal could be even better. Israel probably needs additional safeguards that some hardline regime won’t win office in the future and build a bomb. A nuclear deal needs to ensure that Iran’s nuclear policy is totally civilian, meeting the needs of its voters.

Third, a new deal needs to defang the Iranian Revolutionary Guard Corps (IRGC). They back terrorism and weave a web of illicit international transactions that make them more of an uncontrolled private gang instead of being under the purview of the elected Iranian government. Given that the IRGC hate Rouhani’s party as much as they abhor the West, there is mutual interest here.

Fourth, for years, Russia had Iran “over a barrel” when it came to being the refiner of Iranian oil. Perhaps Trump’s deal can open up American refineries to cheap Persian petroleum, benefitting our firms and consumers, while playing a lead role in constructing civil nuclear reactors or oil refineries in Iran. It’s good business for both countries.

There will always be those who won’t see Iran as anything but the country that took U.S. Embassy personnel hostage back in 1979, just as some Iranians will always see the U.S. at backers of the old Shah. But if Trump and Rouhani can strengthen the American-Iranian pact, both countries can create the alliance that can help finish ISIS, ensure America’s energy needs, and reduce terrorism from groups aligned with Iran’s Revolutionary Guards. 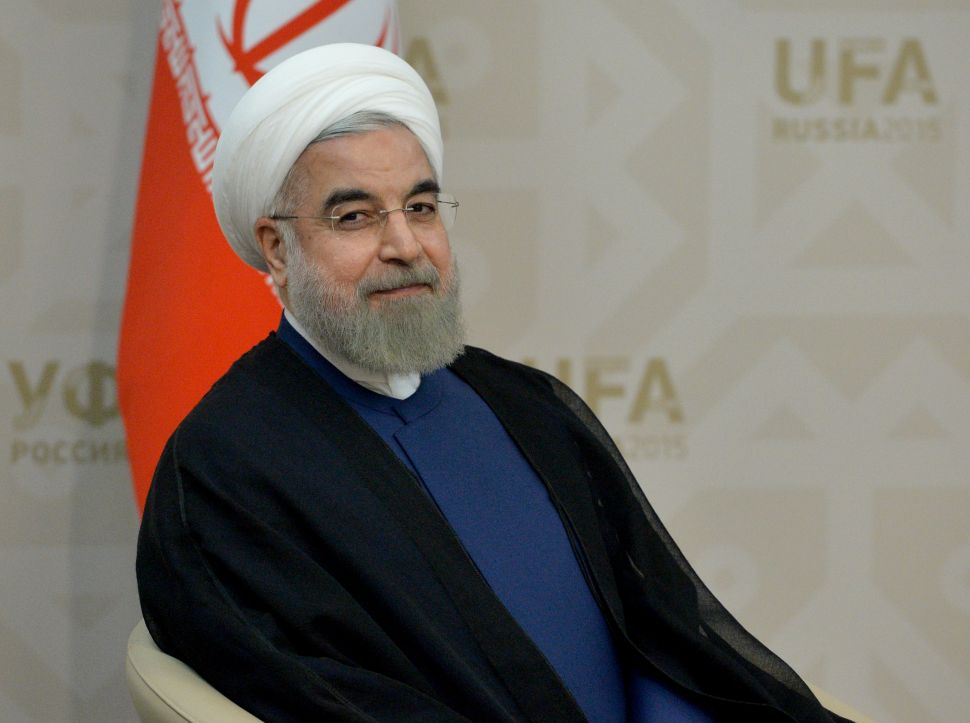