If you asked me to describe the worst blind date ever, it would go something like this:

We arrive at an abandoned warehouse for drinks. My date looks like a cross between John Malkovich and Britney Spears when she was struggling. I can tell I’m going to need to get drunk to get through this. But first, for no discernible reason, we have to build an entire fucking bar from scratch. Now I’m sweating. Midway through the date, it’s revealed that the person I’m working with is an actual neo-Nazi. A strained conversation ensues about why my humanity isn’t up for debate. Then we drink the third shittiest beer on the planet until one of us dies from kidney failure. The end.

If that sounds familiar, you’ve probably seen the new Heineken commercial being dubbed “The Antidote To the Pepsi Kendall Jenner Ad.” Well, the funny thing about antidotes is, over time, they can be just as deadly as the poison. That’s why this ad is high-key worse than Pepsi’s latest tragedy and/or brilliant marketing ploy.

I understand the urge to like the Heineken ad. It shows people with opposing viewpoints finding common ground while engaging civilly and bonding over capitalism. It’s a liberal turkey lightly basted with conservative values. The Pepsi ad was more like a frozen Butterball to the face. So what’s not to like? Well… everything.

For starters, we have to stop putting regressive ideology on equal footing with progressive ideology—if for no other reason than because it’s mathematically disingenuous. For example, in the Heineken ad, one of the “blind date” subjects doesn’t believe in climate change, while the person he’s paired with does. Can I pause here for a second and be honest? I don’t give a shit about climate change. I’m too busy trying to find affordable housing and childcare. But that doesn’t mean I go around trying to pretend it’s not happening. I don’t have to be among the 97 percent of scientists who agree climate change is real and man-made. I know climate change is real because I gave birth in November and my child has only seen snow twice, even though we live in New England and she sleeps in the freezer. Climate change is already having real and lasting effects on the most marginalized communities and impoverished nations, so why would we give the “alt” view any air time? Especially when that view is completely false. If we’re gonna do that, the commercial should have included a member of the Flat Earth Society paired with somebody who… I don’t know… graduated from fourth grade.

I’m also annoyed that Heineken decided racism was off limits, but transphobia was fair game. They apparently knew it would be taboo to have one of their subjects admit, “I don’t like Mexicans that much,” but thought it was fine to have a cis man stare at a camera and reveal that he’s grossed out by trans folks. By doing so, Heineken managed to aid in normalizing bigoted and violent views. Not to mention his pseudo-acceptance at the end of the ad was for a thin, white, “passing” trans woman with military experience. I doubt he’d have been down to pop bottles with a fat Black trans woman with a five o’clock shadow and no intention (or resources) to transition.

For me, the final pairing was the most infuriating. It featured a presumably queer Black woman and the villain from Ant-Man. At one point he says earnestly, “Women need to remember” that their purpose on earth is to “have [his] children.” I had to pause the commercial at this point to rewatch the Pepsi ad, just to recalibrate my capacity for white bullshit. I only continued because I convinced myself that the sista’ might bash a Heineken bottle upside dude’s head. She let me down.

This commercial is the worst type of propaganda. It tricks you into thinking social problems can be resolved if only people tolerate their oppression just a LITTLE while longer. It pushes the idea that bigotry, sexism and transphobia are just differences of opinion that are up for debate and deserving of civil discourse and equal consideration. It makes folks think that four minute commercials are a viable way to address societal ills that corporations have no interest in fixing.

Heineken’s going to have to do a better job if they want us to forget about that time they hung promotional banners in an underground dog fighting club. Oops.

DiDi Delgado is an award winning poet, author, and activist. She is a founding member of Black Lives Matter Cambridge and the Society of Urban Poetry. When she’s not busy captivating audiences, you can find DiDi binge watching Netflix and selling chap books out the back of her car… hoping not to get shot by police. 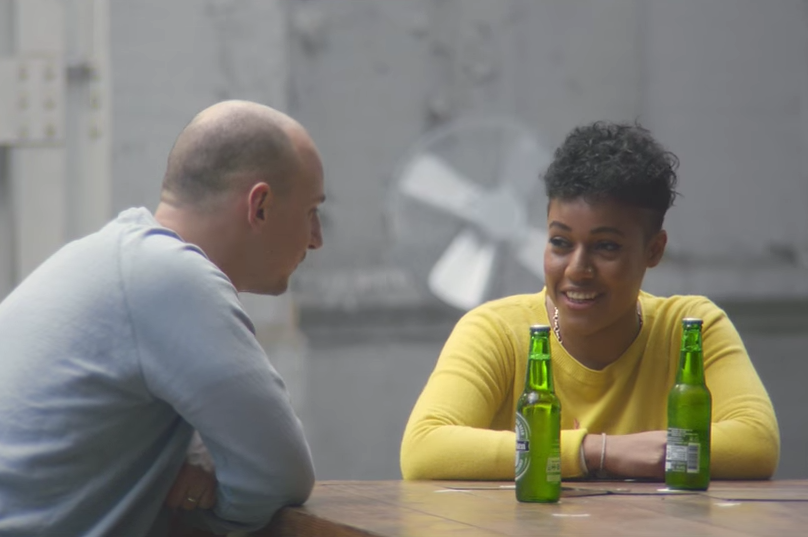