Hillary Clinton spoke at the ninth annual Women for Women International Annual 2017 luncheon this afternoon on Park Avenue, where she spoke openly about the election, the book she’s working on and her former opponent, Donald Trump. But the main focus of the afternoon event was women’s rights, which she discussed in full with moderator Christiane Amanpour of CNN.

In front of tables of well-dressed women, including Meryl Streep and Sophie Turner, Secretary Clinton seemed to feel far more at home than she was on the campaign trail, joking and laughing with a rapt audience. In a khaki pantsuit and orange scarf, she looked relaxed, laid back and springtime ready. She delivered plenty of savage blows, including remarks about Twitter and her prior debates.

As wonky as ever, she detailed the problems she had previously hoped to conquer as President. “I’m writing a book and it’s a painful process, reliving the campaign. I think that partly here at home, there were important messages that could have sent to our own daughters granddaughters grandsons and sons,” Secretary Clinton said about the message a female President would have been sent to Americans.

Did you know that @sophiet is our @womenforwomenuk patron? She is joining us today at the annual luncheon with @hillaryclinton and @camanpour! #SheBringsPeace

“There is still so much inequity, so much unfairness, so much disrespect and discrimination towards women and girls. So, have we made progress? Yes, we have. Have we made enough? No, we haven’t,” she announced, once again showing that women’s rights are human rights.

On women’s rights she continued: “It’s not a minor issue, it’s not a luxury you get to after everything is resolved, it is central to stability, sustainability, democracy. It is critical to our national security. If you look at places where women’s rights are stripped away, they are the places most likely to catalyze or protect terrorism, to create ideologies antithetical to women’s lives and futures. It’s not an accident. Women’s rights are the unfinished business of the 21st century.”

“Women were the primary victims of conflict and yet were not really given the opportunity to be at those peace tables, to make their views known, to speak up,” she told the audience, referencing the type of individuals that Women for Women International helps abroad.

Another issue she had hoped to conquer was Equal Pay. “We know it’s a problem, it’s not something that exists far away, it exists right here. It’s really troubling to me we’re still grappling with how to deal in an economy to ensure that people who do the work that’s expected of them are given a fair wage. We’re not just at a stall point, we’re going backwards,” she told Amanpour. “Young women almost always say to me ‘Do you think I’m ready?’ young men basically say ‘What took you so long?'” she explained about offering people positions.

In her finishing remarks, she explained that according to Nate Silver, “If the election had been on October 27, I would be your President.” While she might not be President, she’s certainly continuing the feminist work she’s done for decades. 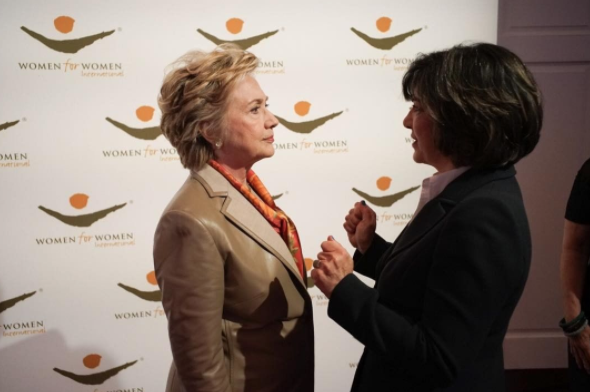