There was nothing like being a kid on a Friday night in the ’90s.  After a long week at school you finally got to stay up late, eat some pizza, while wearing Umbros and a stack of slap bracelets, and watch the best shows on TV. That, of course, included the TGIF lineup on ABC which included Family Matters, Full House, Boy Meets World, Step by Step and a rotation of shows that never seemed to stick around for too long. Dinosaurs, which is arguably the best sitcom about dinosaurs ever, was in the mix for a while, in addition to an updated version of The Monsters. But when most people think of ’90s television, it was the young child stars of those shows that are firmly embedded in our brain, of course along with some classic theme songs.

Once those shows ended, that whole era of television and those stars seemed distant, even though reruns played constantly (is there a day that goes by where we don’t see a Full House rerun?). But then something amazing happened in the last few years: our favorite shows started coming back and we got to see what happens after the finale.

First it was Arrested Development, then Fuller House, Girl Meets World, Gilmore Girls and Twin Peaks to name a few (and if we keep praying, the Friends reunion might become a reality). The Full House crowd saw their dreams come true, with the return Candace Cameron, Jodie Sweeten and the rest of the gang, minus the Olsen twins. Those same fans are in for an even bigger treat, as Pop TV has just debuted Hollywood Darlings last month, starring Jodie Sweetin, Christine Lakin and Beverly Mitchell. They are also bringing along a number of your favorite ’90s stars, including Andrew Keegan, Dave Coulier, Lance Bass, Tamera Mowry and Soleil Moon-Frye. This dream team almost makes up for the lack of Michelle Tanner on Fuller House.

Similar to another TV trend, Hollywood Darlings is presented in the style of reality show comedy, so the actresses are simply playing heightened versions of themselves, similar to Curb Your Enthusiasm and VH1’s Barely Famous. Further, the show is mostly improvised. For each episode, there are loose ideas and the women have to basically carry themselves to the finish.

Tweeting LIVE in an hour during this weeks @hollywooddarlings! 8pm EST/5pm PST! (And yes we may have played Girl Talk 😜) @poptv

“All of us came from the world of scripted so we had no idea how mentally and physically exhausting improv would be. After 16 hours it’s hard to be clever and witty! But luckily we have such natural chemistry we just play off each other,” Mitchell told the Observer. The show came about through executive producer Jimmy Fox, who was looking for a team of ’90s stars to work on a vehicle like this.

“When he mentioned the other women he was talking to, he was surprised to learn we were all friends. Once we were all on board we came up with the concept of improvised comedy because none of us were down for a reality show.”

For Lakin, who went to college and then worked in a number of films and TV series after Step by Step, this was an exciting opportunity to flex her improv skills and show off her personality. “It does cross the line a little bit because it is our real names and people do make that association [her husband also plays her husband on the show.] I’m a little bit more of an open book. I don’t care as much what people think. I’m always willing to poke fun at myself,” she explained.

It also a little weird to watch these women as 30-somethings navigating the trials and tribulations of motherhood, when we assume they are frozen in time at 12 years old.  One of the funniest scenes in the pilot includes a fan freaking out over seeing Sweetin and Mitchell and not recognizing a somewhat different looking Lakin, who is asked to take the picture. Lakin says this absolutely happens in real life all the time. She attributes it to her tomboy character always wearing a backwards cap.

Besides learning about these women’s clearly very strong, sweet friendships on the show, like the fact that Lakin and Sweetin took acting classes together as kids, it’s also filled with the ’90s nostalgia that millennials are all about.

According to a 2012 study by Cristel Antonia Russell and Sidney J. Levy re-watching movies and shows is a form of self care. Another study found that with the massive expansion of media, these relationships that were once very parasocial or one-sided are now much more intimate. Our connections to fictional characters are stronger than ever before.

Lakin even argues that viewers get to share these relationships with the next generation. “Every 20 or 30 years there is a resurgence for the zeitgeist. For people who grew up with these shows you want to relive your childhood through your children. And now with Fuller House and [the recently canceled] Girl Meets World we get to watch them enjoy for the first time,” she said.

“Hollywood Darlings” airs at 8 p.m. on Wednesdays on Pop TV. 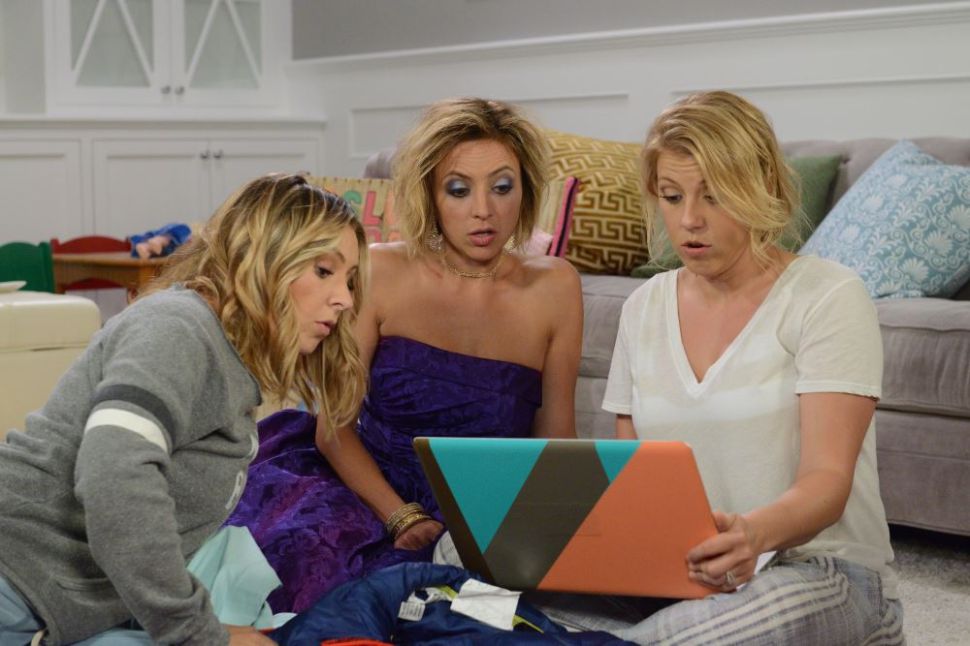