Around the time of TechCrunch Disrupt NY last year, I was working on an article about the challenges, fear and discrimination women in the tech world face when it comes to pregnancy and family planning. We spoke to 12 women with stories that show why female founders are terrified of getting pregnant, and one of the most horrific accounts came from a nursing mother we met at the conference. One minute we saw her on stage beaming with confidence as she presented her startup to a large crowd and a panel of investors during the final round of the pitch competition. The next she was discouraged, being told the only place she could pump was on top of a broken escalator.

“I had to pump in between sessions, and it took them hours to find me a room,” she told me last year. “It was cold without a table or anything. I asked for another room, and they put me on top of a broken escalator. My milk got flagged at the airport, and we missed the flight, and I was trying to rehearse over a screaming baby. Compare my experience to that of the 18-year-old who won.”

In 2016, a woman who was recognized for her ingenuity and leadership was quickly cast aside and embarrassed when it came to her motherhood. This year, however, TechCrunch learned from the mistake and provided accommodations for nursing moms. The organizers reached out to Mamava, a company that’s placing free-standing lactation suites in public places, to come to Disrupt as a sponsor.

‘I just saw a cute startup you’d like!’ he said one minute into the conversation, pulling up a picture of it on his phone. It was a dog house with a camera in it so you can see your dog from afar, because I was only there to report on cute things like puppies, obviously.

On my first loop around the exhibition area called “Startup Alley,” it was impossible to miss Mamava in the corner with a large igloo-like inflatable. It turned out it this wasn’t just a showcase prop, but a functional place to nurse or pump. And it wasn’t the first time the company was asked to set up a space for moms at a tech conference either. This year, what is perhaps tech’s biggest conference, the Consumer Electronics Show (CES) in Las Vegas, invited Mamava after receiving negative press for not having accommodations in 2016.

“Alas no moms used the suite at TechCrunch, but we heard plenty from moms who would have liked to in the years they were breastfeeding,” Mamava co-founder and CEO Sascha Mayer told the Observer. “This was the first major conference or trade show we have been to where we didn’t actually have a line at times.”

The fact that there were no women needing the suite actually says a lot about the diversity of tech culture and its attitude toward women in general. There are few of them—women earn only 28 percent of computer science degrees, own only 5 percent of startups and hold only 11 percent of executive positions at Silicon Valley companies.

While it wasn’t used, the suite and company’s presence were a breath of fresh air that made not just mothers (past, present and future) feel more welcome, but all women in general. Tech is male-dominated and riddled with sexism, so it’s not a surprise that at tech conferences—which are the only places in the world you’ll find a line for the men’s bathroom but not the women’s—women don’t feel all that comfortable.

Personally, I paid a little extra attention to how I dressed each morning of the three-day conference. Were my heels too high? My skirt too short? I experienced some casual sexism too. While on the food line, the man in front of me, an investor, began talking to me and asking how I was liking the conference. “I just saw a cute startup you’d like!” he said one minute into the conversation, pulling up a picture of it on his phone. It was a dog house with a camera in it so you can see your dog from afar, because I was only there to report on cute things like puppies, obviously.

The presence of companies like Mamava truly is making tech more welcoming to women. Mayer’s whole reason for starting the company was to give women the space they aren’t afforded.

“As a nursing mother (11 years ago now), I had a supportive employer and a private place to pump at work,” she said. “My real challenge was when I traveled for client meetings. I often thought about the women who didn’t have the same autonomy or support at work and how breastfeeding was really not an option.”

Mamava is giving women a space to breastfeed wherever they are. The company has placed 220 suites in places like airports, stadiums and museums across 36 states and counting. It also has a network of 1,200 other pumping areas that they’ve vetted and listed on the Mamava app.

“Anywhere women work,” Mayer told me when I asked about plans for expansion. “That women is selling beer at the stand and she might be a breastfeeding mom and want the same oppurtunity to use her pump.”

But the success hasn’t been an easy ride, largely due to sexism in the industry.

“You might be interested to note that a number of times when we’ve pitched male investors, we heard things like ‘my wife breastfed three kids and she never needed anything like this. Does it send the wrong message?'” Mayer said.

“‘Did your wife choose to or need to work outside the house?'” she responded, telling me that was “a question that came from a point of extreme privilege. “What about the mom who works in retail or a call center or as a police officer?” she said.

It’s not uncommon for women-focused startups to miss out on investments. Last year, venture capitalists invested $58.2 billion in companies with all-male founders and just $1.46 billion in women-led companies. But even besides just scoring cash, products that are perceived as too feminine or for women only see a lot of extra hurdles.

For my She’s the Boss column that spotlights kickass women founders, I recently profiled Mia Freedman. At 24, she was Cosmopolitan’s youngest ever editor-in-chief and has now founded Australia’s largest women’s media company. While working with a male ad executive it, she hit this very roadblock.

“I was trying to explain the idea,” she told me. “He said, ‘Oh women, that’s an interesting niche,’ as if it were a site about Golden Retriever puppies. It’s like, that’s 51 percent of the population buddy—that’s hardly a niche.”

The following week I spoke to Jennifer Grove of Repeat Roses, a company that takes the flowers from events like weddings and runways shows, breaks them down into bouquets and sends them to hospitals and shelters so they don’t go straight to the landfill. She said VCs only perk up to her when she drives the point that it’s not just a frilly flower company delivering smiles, but a solution to a huge, ugly waste problem.

Mayer and each of these other founders is showing that women have a space in tech too. And for Mamava, that includes a much-needed physical space.

“The good news is that we are making progress,” Mayer said. “Women entrepreneurs will be the ones who shift culture by celebrating and supporting families.”

TechCrunch did not respond to our request for comment. 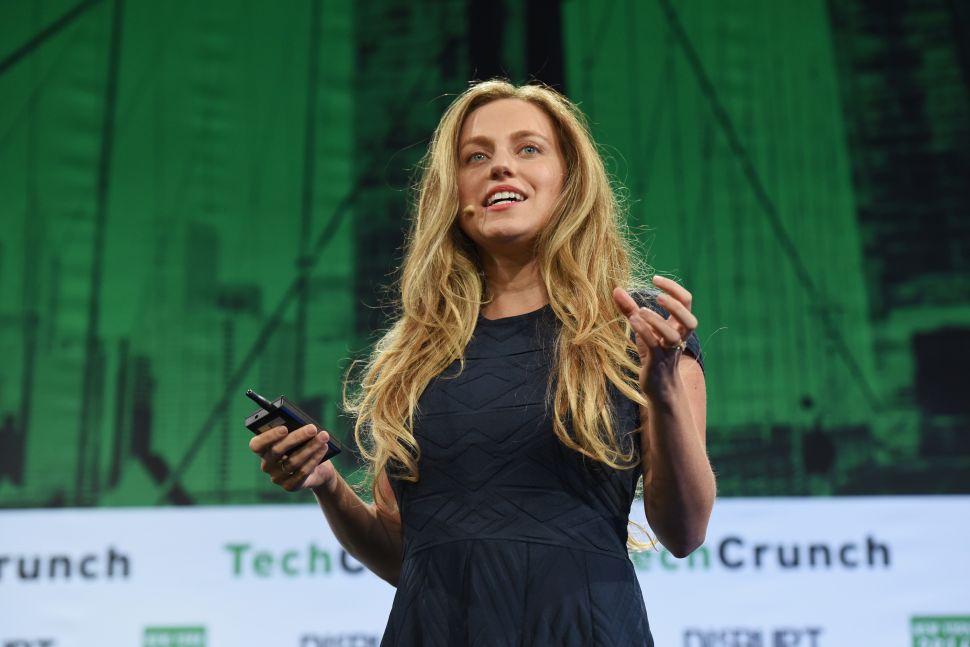