At the Brooklyn Cruise Terminal, hundreds of branded Beautycon totes full of beauty products were laying in a pile on the floor near the entrance. They were being handed out to guests, some as young as six years old—who paid anywhere between $149.99 and $449.99—to gain entry to the one-day event. Throughout the 133,000 square-feet of the cruise terminal, over 70 brands hosted events, giveaways, meet-ups with influencers and in some cases, such as Milk Makeup, a live model casting for its next ad campaign. That’s in addition to the pink carpet, where influencers like Jordyn Woods and Gigi Gorgeous (the overall host for the event) plus celebs such at Drew Barrymore and Bella Thorne posed for photo ops. There were also panels to attend, where Gabrielle Union, Linda Wells, Tess Holiday and the founders of the Women’s March chatted about everything from politics to makeup application.

When Beautycon was founded in 2011, it was more of a trade show for YouTubers and influencers, but it has quickly added on festivals in London, New York and Los Angeles, plus original content and subscription boxes. Investor Moj Mahdara, previously the CEO of Exopolis, a digital advertising studio with clients ranging from Microsoft and Apple took a stake in the company in 2013, and shortly after transitioned to CEO.

Mahdara said her mission when she first became involved in Beautycon, was to “create almost like a living, breathing expression of community, both for IRL and URL community and challenging the status quo around beauty.” As she sat on a black couch in one of the back rooms of the Beautycon convention, the music and voices of the festival blared over the speakers and through the doors. “Me and pretty much everyone on the Beautycon team, we’re weirdos. We’re all strange in our own way. If you look at what this festival is or the content we make, or the subscription boxes, they’re pretty much an expression of us.” As it turns out, that individualism has also helped the company find success. According to Fast Company, the expected revenue of Beautycon last year was $10 million.

This particular Beautycon event in New York City was different, because it was the biggest yet. Last year, when Beautycon was held at Pier 36 in Manhattan, Mahdara estimates they sold 6,700 tickets. This year they capped the limit at 10,000 and sold every last ticket.

“This event might be the most mature we’ve ever been as a company and as a brand. We worked really hard to make sure that the brands onsite today brought something epic for the consumer to experience from a fan point of view,” she explained.

That’s not all, this event also included more culture than ever; its expansion was made possible with new voices and discussions that touched on more than just makeup. For example, the Women’s March founders had a panel with Chloe Lukasiak, while Dove Cameron moderated a panel on saving time and money.

“I think beauty is in the eye of the beholder,” said Mahdara. “I think for a long time, the control around that conversation has been primarily a highly produced, controlled image. Digital platforms have now made it where you have content creators that are defining what that image is. If you think about how many thousands of people are here today, the fact that they feel welcome and included to be here, they feel like they have a right to celebrate themselves this way, is a sign of the times. That’s incredible.”

High above the crowds, waiting to take rainbow unicorn themed pictures at Wet n Wild’s photo booth, or those posing for selfies with L’Oréal’s pink floral Eiffel Tower, were black and white signs with inspirational phrases. “Beauty is power,” “Here’s to real friends and false lashes,” “You don’t need lipstick, lipstick needs you.” That last one is also printed on a sign at the Beautycon headquarters in Los Angeles. Jordyn Woods’ art exhibition (art was another new facet to the Beautycon festival) also had a big black and white sign that said, “There should be no separate sections in fashion. There should be just one.”

“You think you know Jordyn Woods and you may write her off as Kylie’s best friend, but she actually has something to say about plus-size women or not plus-sized women and women just being comfortable in their bodies and how they’re being spoken to in traditional media,” said Mahdara. “She’s creating a piece of art that speaks to that. I think that’s what we’re basically saying, too.”

Gabrielle Union reinforced that statement during her panel with Linda Wells, the former EIC of Allure. “I used to live in fear of someone drawing an arrow and pointing to my cellulite. Now I’m going to point it out before you have a chance to. I am me, this is what it is,” the actress proudly stated.

A little over two months ago, news broke that Beautycon raised $9 million from investors. One month later, it was announced that they also hired their first head of content, Elyssa Starkman formerly of Refinery29. “My god, what are we going to do with all this money?” says Mahdara with a smile. “What’s definitely coming is all of these big content formats. That’s a good amount of what we’re focusing on in the budget side.”

And it looks like Beautycon will be introducing their own cosmetic products in the near future. “It would be silly of us not to, right? That’s all I can say now. We’re working on something. You could say we’re up to something.” She may have just dropped a hint a few days ago too when she posted a photo on Instagram with makeup artist Pat McGrath. She captioned the photo: “We up to something.” 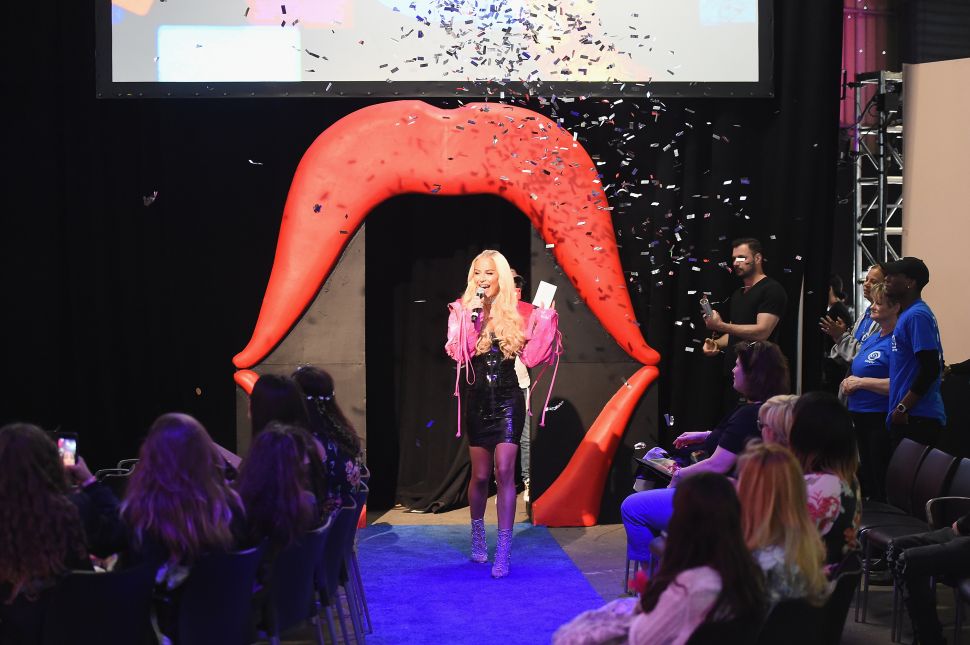