For agents of the intelligence community, the FBI is having a strange moment in the public spotlight. On Wednesday, the news channels ran breathless stories about the bureau’s “mildly nauseous” director James Comey, called to the carpet to answer questions from the Senate Judiciary Committee over his release to congress, two weeks before the election, that the agency was investigating new emails related to presidential nominee Hillary Clinton’s campaign.

But turn on your TV tonight and change the channel to USA, and you would see a completely different—but equally valid—picture of the bureau. Inside the FBI: New York is a new docu-series from TV uber-mensch Dick Wolf; which premiered April 27th and will run for six weeks. Inside takes a humanizing (and in traditional Wolf-ian way, heroizing) lens to the individuals who work out of New York’s central office protecting our citizens against threats both abroad, at home, and more frequently…online.

Each of the episodes is split into themes: “Deviant Crimes” like those of the Cannibal Cop set the tone for tonight’s ep; “Global Fight” and the pilot “The New Normal” about the bureau’s response to terrorism; another, called “The New FBI” focuses on the cyber crime unit and a gay agent struggling with the aftermath of the Orlando shooting. The through-line of the series–which features real field agents and department heads both at work and at home in a wider swath of diversity than at least I originally imagined–is that this isn’t your dad’s FBI anymore. Even if the news sometimes tells you differently.

The fortuitous timing of this series while the agency is taking a hit in the public eye is just that…fortuitous. The series had actually been in the works for two years, and according to Wolf’s co-EP, the Emmy-award winning documentarian Marc Levin. “I remember Dick took me out to lunch to discuss at the Yale Club—this was about 13 or 14 years ago—getting into non-fiction television. I remember sitting there and saying ‘Dick, why do you want to get into non-fiction TV? You’re a mogul! The king of television!’

So that always stuck with me, and two years ago, he appeared at my studio here and said ‘I’ve developed this relationship with Director Comey of the FBI. I’ve always wanted to do a scripted FBI show, it’s been a dream of mine for years. Director (James Comey) and I talked, and he said he’d be supportive (of the scripted show), but he suggested that I first come to spend some time in the New York flagship office, just to get a feel.'”

According to Wolf, the idea was sold to him after his first meeting with the FBI’s Director. “James Comey told me an interesting story,” Wolf wrote to me in an email regarding the series. “He said, ‘When I was growing up, every 12-year-old boy wanted to be in the FBI, because of the original Efrem Zimbalist series. I would like to see a show now which makes every 12-year-old boy AND girl want to join the FBI.’”

Wolf continued: “(Comey) feels strongly that this type of positive programming about the Bureau will help educate people about the multitude of areas the Bureau covers and the diversity of its agents and operations. The opportunity to work together was too good to resist.”

Levin, however, was sold on the basis of Wolfs’ description of the New York bureau’s agents: “Wolf and his partner Tom Thayer spent a day or two in the New York offices of the FBI, and then they come up here and said something like this: ‘If I told my casting director to get me some actors for the head of the Organized Crime (unit), and in walked this actress who is a 4’7″ Chinese-American woman, I would have fired my casting director. But then I met Belle Chin, the supervisor of Organized Crime.’ He just went on like that, how every one of the real people was so different than what he might imagine and certainly from the stereotypes.”

Levin and his crew arrived in the New York office and began filming on September 15, the day of the Pope’s visit to New York, an event that, thankfully, went off without a hitch. “It was kind of a test to see if we could get inside and get everyone (at the FBI) feeling comfortable talking with us there.”

A few weeks later, Levin and his crew were filming at the bureau when the attacks in Paris happened. A few weeks after that: San Bernardino. Cut to a few months later, and it’s Brussels. Then Orlando. Then Nice.

“We were inside the New York Counterterrorism office, with the joint-terrorism task force while they were dealing with this, which was really a change from the Al-Qaeda model, where people were trained and sent over here.”

And still, the FBI allowed Levin’s team unprecedented access, not just to their highly sensitive work duties, but to their home lives as well.

“There’s no doubt that at first, there was a lot of institutional resistance and suspicion. Even though the Director (Comey) and Dick wanted to do something, this is a secret institution that basically had a default position of “No Comment” since its inception,” said Levin. “So the idea of a small (film) crew inside as the Paris terrorist attacks are happening and they’re trying to figure out any angles here, while San Bernardino is happening…. it made a lot of people uncomfortable. And it took time to develop that trust where people were finally open enough to invite us into their homes, so we could do these 3-dimensional portraits.”

What’s impressive about Inside the FBI: New York is that the portrait Wolf and Levin paint isn’t just 3-D; it’s as large as it is deep: focusing on not one particular agent or department but painting a vast picture that isn’t as easy to characterize (or caricature, for that matter).

“I think diversity is the first big surprise you have when you watch the show,” Levin tells me. “And I’ll admit, I had the same image: man in black, 6’2, blond, blue-eyed, crew cut guy. It’s not just diversity, I don’t think. The FBI is in the paper now every day, obviously, you’ve got all this controversy surrounding it, and the whole intelligence community as a whole.”

“And yet we really don’t know the men and women on the front line,” Levin continued. “The professionals, in other words. We know the political figures, but we lose sight of the men and women who are working—whether it’s Counterterrorism, organized crime, crimes against children, violent gangs. That’s really what the series gave us a chance to do.”

Inside the FBI: New York airs on Thursdays on USA at 10 PM ET. 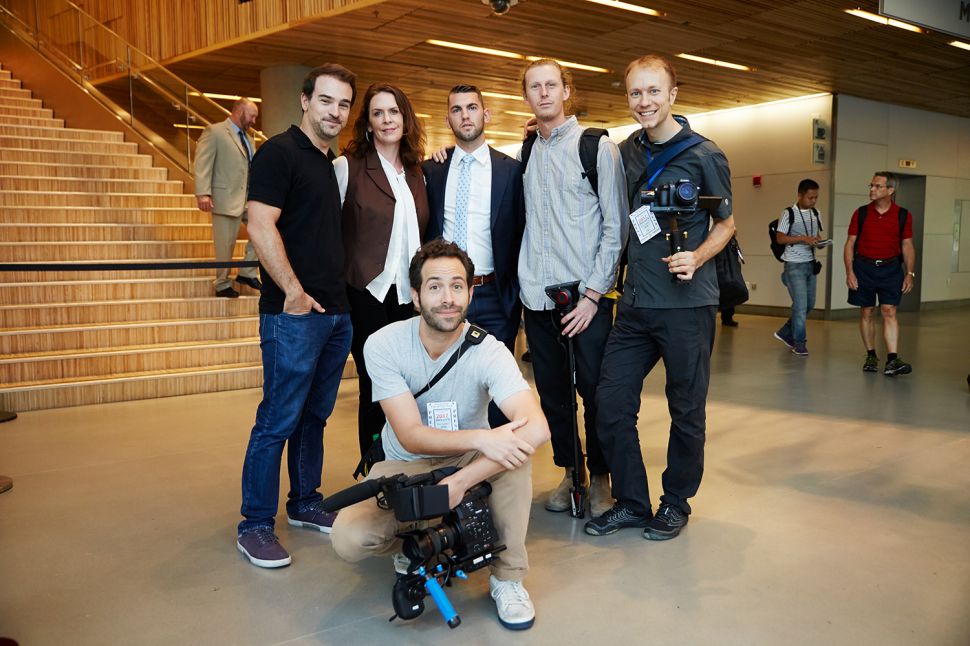