Yesterday, I played a few of my songs for the crowd at the Cavern Club. Let me write that again because I still can’t believe it occurred. On Sunday, May 21, this 48-year-old fading modernist took the stage at the very place on Mathew Street in Liverpool where The Beatles were discovered and played a set at the International Pop Overthrow festival. It’s precisely 24 hours later as I write this and I haven’t slept yet; why sleep when you have a chance to live your dream?

For 15 years now, David Bash has been producing International Pop Overthrow. Named after the song and album by Chicago’s very much missed pop kings Material Issue, IPO has grown and thrived, appearing in a dozen cities over the course of the year (it’ll hit Brooklyn in November). But as Bash told me yesterday, the 8-day version in Liverpool, with its culture of all-day drinking, unmatched enthusiasm for live music and unrivaled roots as a pop mecca, is the best expression of the festival’s ideal.

Some 70 bands come from all over the world to pursue the elemental art form of jangly guitars, pulsating backbeats, tuneful melodies and sweet harmonies. Still works.

The Cavern—which really is way underground—opened its doors in 1957 and later that year a fellow called John Lennon led his skiffle band The Quarry Men through a set. In May 1960, the Cavern hosted its first rock n roll night—Rory Storm and the Hurricanes plowed through a set with Ringo Starr on drums. The first Beatles appearance occurred on February 9, 1961. The band played regular lunchtime sets—Brian Epstein discovered them there in November of that year. Having given up live performances entirely for the majority of their career, it’s maybe not generally understood what a fearsome live act The Beatles were. Between Feb. 1961 and their last gig there on Aug. 3, 1963, The Beatles played a mind-boggling 292 shows at the Cavern.

On Halloween 1965, The Who played in Liverpool for the first time, their Cavern appearance marking “the first Merseyside appearance of one of England’s top groups, the hit recorders of “Anytime, Anyhow, Anywhere” and “I can’t explain.” I’ve preserved the mistakes on the title of the first Who song and weird capitalization of the second because they’re just so impossibly charming. Exactly five years later, on Halloween 1970, the Cavern hosted the first-ever performance of an operatic quartet called Queen (Freddie Mercury lived in Penny Lane).

All these years later, the spirit of Merseybeat lives on and the International Pop Overthrow captures it. On Saturday night, the breakout band of the festival, B-Side from Bromsgrave, U.K., took the stage. I was already a fan from the appearance of several of their pop gems on IPO compilation CDs (which you should buy here), but what really startled me was the band’s ability to reproduce these lush and complex Beach Boys inflected harmonies onstage. Led by Sean Macreavy, the band has that rare ability to create songs that feel at once totally novel but still rooted in shared appreciation of genres past. And it doesn’t hurt that they have two authentic gems just screaming to be included in summer movies, “The Sun Brings Out the Girls” and “Sky Crying Rain.”

Because of the multiple stages, it’s literally impossible to see every band, and I couldn’t attend the entire festival anyway. But other highlights from my three days include Scotland’s The Fast Camels, a prog pop inheritor that looks like Slade and sounds like late Mott the Hoople; NYC’s four-girls-two-guys Slyboots (the female guitar player even gets a couple solos!); a Kinks tribute from Spain called The Village Green Experience fronted by the eponymous singer of Jose Casas y la pistola de Papá (I heard their drummer, who was wearing the t-shirt of their hometown Sevilla football team Betis, singing Dave’s great harmony from “Better Things” and it spoke to me);  and The Dream Factory from Tamworth, who come with a full horn section and kill it. Late Saturday night, David Bash got down on one knee on the Beatles Stage and proposed to Rina Bardfield, his partner in running IPO. She accepted.

For me, the chance to warble a couple of my 90s tunes on this sacred ground—backed by a pretty killer impromptu combo—was a surreal experience, a fantasy baseball chance to pretend for a few moments that I belong among the greats. And that’s the transcendent power of rock ‘n’ roll, innit?

Jim Ellison, the leader of Material Issue, was a friend of mine. He wrote “International Pop Overthrow,” with its killer hook and strangely great lyrics (“I don’t need a girlfriend, I need an accomplice”), before he himself became a rockstar. He willed it. For me, that ship has sailed. I’m not destined to become a rockstar. But the spirit of Merseybeat—Rory Storm, The Undertakers, The Senators, The Fourmost, The Dominoes, The Hideaways, Remo Four and Beryl Marsden, and The Beatles themselves—these magical moments baked into the bricks of the original arches of the lovingly restored Cavern Club, they allow one to dream. And that’s what music is for. 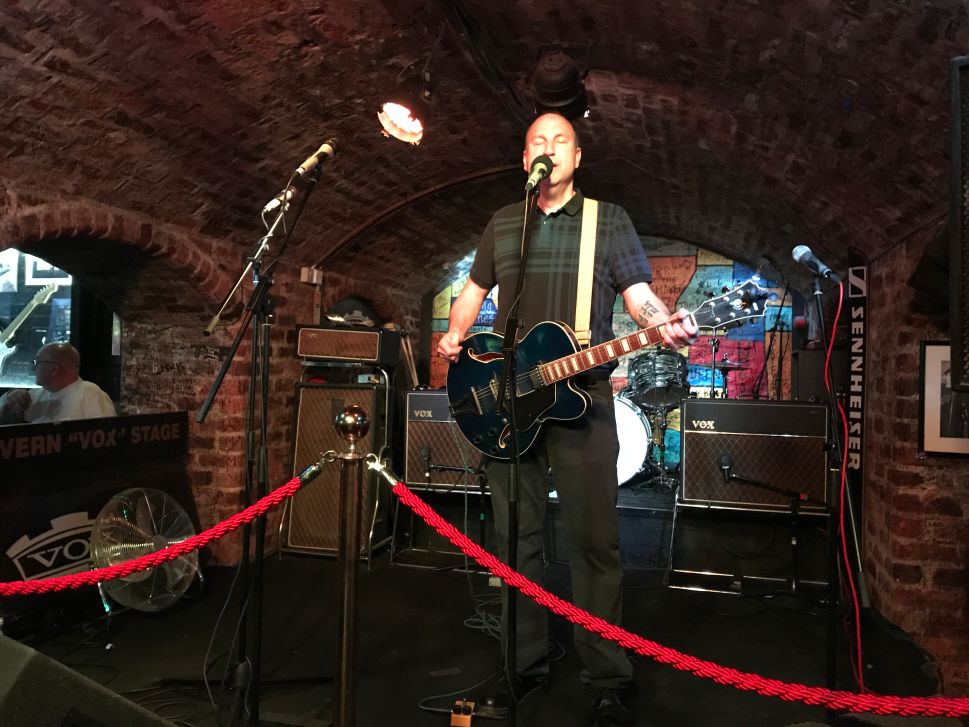