Everyone loves gifts. Some people love giving more than getting, and some prefer getting to giving. In some areas of the world, gift giving is a cultural imperative. Over the course of his maiden presidential trip, the president and his first lady—like all their predecessors—were showered with presents.

Countless hours were dedicated to selecting the gifts given to Donald and Melania Trump. Teams of assistants in the host countries sought advice. There were meetings, evaluations and arguments over which gifts were appropriate and worthy for the visiting top U.S. dignitaries.

Hosts bestow gifts that they feel best represent the message they want to convey to the American president, his advisers and the American people.

Each gift tells a story, conveys a message, and becomes a part of history.

Israeli Prime Minister Shimon Peres gave President Gerald Ford a priceless pristine Roman era wine decanter. It was from the first century, from the time and land of Jesus. It was a priceless symbol of history.

In 1978, during the signing of the Camp David Accords, Israeli Prime Minister Menachem Begin presented President Jimmy Carter with a one-of-a-kind paper cut of Jerusalem. Egyptian President Anwar Sadat gave the United States president a saddle. Both gifts were steeped in meaning. A short while later, as a result of signing the Accords, these two Middle East leaders were presented with the Nobel Peace Prize.

But there’s a catch. In the end, the carefully chosen and ceremoniously presented gifts do not actually belong to the president or first lady—or secretary of state or any other U.S. official. All presents belong to the U.S. government. The president and the first lady receive the gifts on behalf of the American people.

According to U.S. law, an elected official—especially a president—cannot accept presents. These gifts would be considered bribes and, if he kept them, the president would be violating the Constitution as well as the Foreign Gifts and Decorations Act of 1965.

Article 1 Section 9 Clause 8 of the Constitution, the Emoluments Clause, clearly says that this is against the law. Emoluments are any gain, profit or salary. It reads:

“No Title of Nobility shall be granted by the United States: And no Person holding any Office of Profit or Trust under them, shall, without the Consent of the Congress, accept of any present, Emolument, Office, or Title, of any kind whatever, from any King, Prince, or foreign State.”

The 1965 Gifts Act further explains that the reason the president accepts these gifts is because refusal may cause “offense or embarrassment.”

Before the Gifts Act was enacted, first lady Jacqueline Bouvier Kennedy received a horse from Ayub Khan, the governor of Pakistan. It was 1962 and Khan had established very good relations with JFK. During his first visit to the White House, Khan discovered that he and Jackie had a mutual love of horses and that the first lady had participated in competitions while at Georgetown. Thus, the governor of Pakistan presented the first lady with a black horse named Sardar, which she renamed Black Jack. Despite his allergy to horses, JFK encouraged Jackie to keep and ride the horse. In her biography, Jackie Kennedy wrote how comforting the horse was to her in the aftermath of her husband’s assassination.

Nowadays, every president accumulates thousands of gifts during his time in office. Each one is recorded, documented and brought to the National Archives. After the president leaves office and builds a presidential library, the items are displayed there.

Now, let’s say that the president or the first lady likes a particular item. That doesn’t mean, to the chagrin of many elected officials, they can take it with them. They can, however, make a request to purchase the item for its market value.

On her first trip abroad as first lady, Melania Trump received a gift I think she will want to keep.

Nechama Rivlin, the first lady of Israel, presented Melania Trump with a gift to share with her 11-year-old son Baron. It is the book Hug by David Grossman. Nechama suggested that Melania and Baron read the book together.

Melania was given three copies of the book: one in English, one in Hebrew, and one in Arabic. Grossman is an award-winning, internationally acclaimed author, known as a powerful, biting writer of serious literature. His children’s books are sentimental and poignant.

The book’s theme is that everyone, especially every child, is unique in their own special way. It is Nechama’s way of helping Baron deal with the very difficult role of being the son of a sitting president. Hugs has very little monetary value and would fall under the exceptions to the gifts rule, especially if read by the first lady and her son. Its monetary value may be small, but its sentimental value is large.

The first lady of Israel, now a grandmother, was thinking like a mother lioness and lending sage advice to the much younger Melania. The exchange was touching. 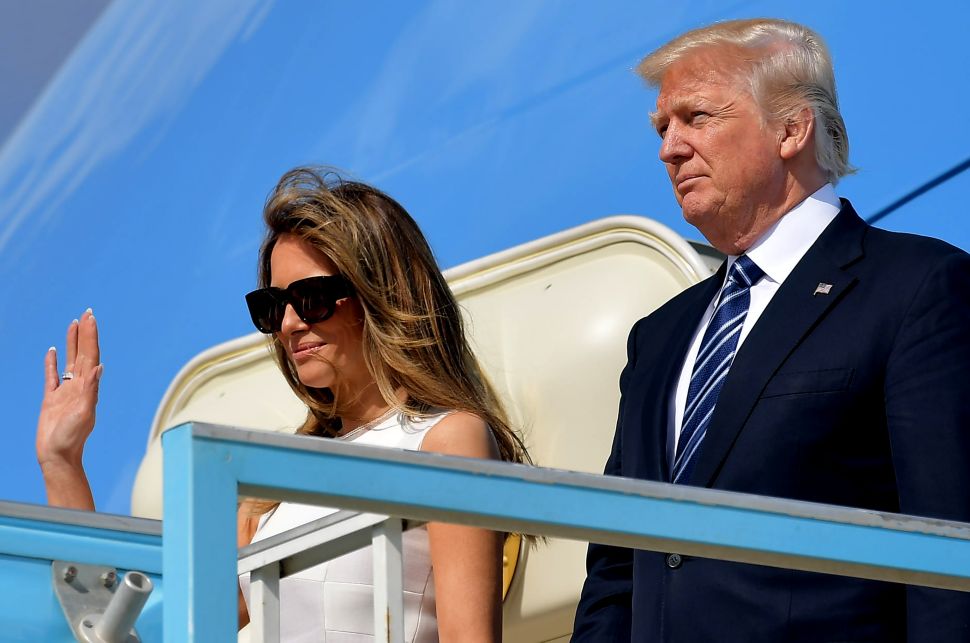