Donald Trump is wildly unpopular with coastal elites, but few despise him as feverishly as the Hollywood Brigades, led by Meryl Streep, and the late night comedian squadrons, headed by The Tonight Show’s Stephen Colbert, The Daily Show’s Trevor Noah, and Last Week Tonight’s John Oliver.

There are endless legitimate grounds to go after Trump’s political positions, but the lame attacks from the entertainment-industrial complex have merely served to “alienate conservatives and made liberals smug,” as Caitlin Flanagan recently wrote in The Atlantic. One reason for this is that the jokes being told about Trump are almost uniformly unfunny, condescending and lacking insight. They appeal largely to the tiny sector of the population that inhabits the same narrow political-economic bubble as the people telling the jokes.

At her speech at the Golden Globes earlier this year, Meryl Streep briefly became a national media hero by suggesting that Hollywood could soon be decimated because Trump planned to expel “outsiders and foreigners.” I personally find Trump’s immigration policies to be outrageous, but I’m pretty sure that Hollywood illegals will not be hunted down and deported by Trump’s government and that black-clad stormtroopers won’t be raiding Beverly Hills stores any time soon to bring downtrodden shoppers to secret detention facilities. (Needless to say, poor legal and illegal immigrants do face huge threats from the Trump administration.)

Streep also fretted that so many of her actor friends would be forced out of the country that the only remaining forms of entertainment would be uncultured spectacles like football and mixed martial arts. Talk about a bubble!

Trump has been the chief target of late night comedians since the earliest days of the campaign — somehow Clinton just never sparked their ire in the same way — when Noah suggested that “maybe you should look in the mirror, asshole.” Colbert recently delighted his audience by saying that the only thing Trump’s mouth “was good for is being Vladimir Putin’s cock holster.” (This started the bogus rumor that the FCC was singling out Colbert’s show for a special investigation.) Oliver has attacked Trump so regularly that a few months ago he promised to lay off Trump, saying, “We’re very anxious to not make it all Trump, all the time.” His vow didn’t last long.

As seen in Colbert’s remark, late night comedians have largely written off Trump as Putin’s agent and have attacked, often with reason, some of his economic and social policies. What’s slightly more awkward, if anyone were to stop and think about it, is that the comedians also portray themselves as principled enemies of Trump’s economic agenda and keen supporters of the Jack and Jill Lunchbuckets who Trump is said to be screwing.

Well, he might be screwing them, but the Hollywood Brigades aren’t going to be feeling any pain, since these liberal heroes are uniformly rich and will all benefit greatly from Trump’s tax policies. Colbert’s net worth is $45 million—he’s the highest-paid late night host—while Noah is worth about $13 million and owns a mansion in New York City.

The hypocrisy really gets ratcheted up with John Oliver, the No. 1 darling to so many liberal anti-Trumpies, who regularly attacks GOP tax schemes as giveaways to the rich and detrimental to the poor. (Again, that’s an apt description, but they evinced less rage about Obama’s economic and tax policies, which also funneled money upward to an extreme degree.)

For years, Oliver has criticized the estate tax, which opponents, in a smart linguistic move dreamed up by Frank Luntz, long ago labeled the “death tax”; and the tax code’s raft of loopholes that benefit special interests he identified as oil companies and hedge fund managers. Oliver even briefly established the bogus Our Lady of Perpetual Exemption to draw attention to tax-exempt status granted to churches and charities.

Back in July 2014, in an episode in which he lamented the Wealth Gap in America” (which has resulted in the richest one percent of Americans controlling 20 percent of annual income), Oliver said, “At this point the rich are just running up the score…What sets America apart is that we are actively introducing policies that disproportionately benefit the wealthy,” such as tax cuts and loopholes like trusts. 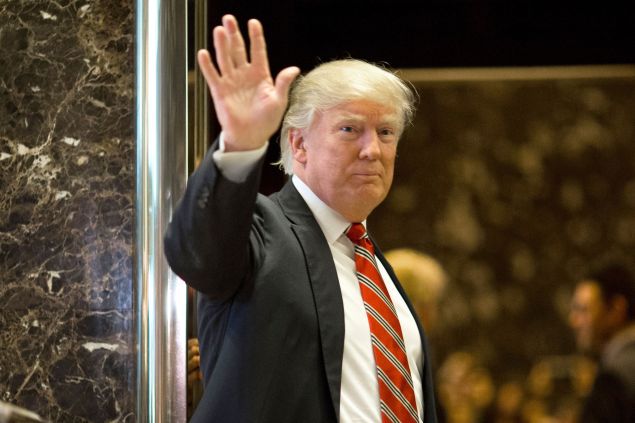 Donald Trump was a proponent of the 421-a tax loophole when he was a real estate developer. Dominick Reuter/AFP/Getty Images

So it’s a little surprising to discover that just months before, Oliver had a tax attorney set up two revocable trusts, one for him and one for his wife, to hide the couple’s purchase of a $9.5 million Manhattan penthouse. Then he used a tax loophole created by Donald Trump himself back in the 1970s, when the current president was merely a prominent New York real estate developer and aspiring celebrity author.

The loophole in question is the banally named “421-a” tax dodge, which was recently attacked in a Daily News op-ed written by two New York state Democrats, one a senator and the other an assemblyman. They said that the original 421-a tax exemption was “designed to encourage new development in locations that were vacant or underutilized,” but that Trump wanted to use it in 1980 when he bought Bonwit Teller in midtown Manhattan. The plan was to tear it down and build Trump Tower, which would mix office space and luxury condos.

“Told by Mayor Ed Koch that the Bonwit site could not qualify for a 421-a tax break, Trump and his lawyer — the infamous Roy Cohn — sued the city,” the News op-ed recalls. “In the end, they won a tax exemption worth $50 million for the extravagant Trump Tower. More importantly, Trump’s lawsuit established that all new development, even luxury projects, would be automatically eligible for the 421-a exemption.”

The article said that the 421-a provision, which expired last year in a political impasse but that Albany is considering revising, will rob state coffers of $1.3 billion of revenue “this year alone in foregone property taxes.”

But just four months before Oliver’s July show, he had hired slick New York law firm Proskauer Rose LLP, which, in addition to union-busting and representing BP America, ChevronTexaco and ExxonMobil, specializes in helping the rich find tax breaks and buy real estate. Proskauer also has a long-time Private Client Services group, whose “lawyers handle complex tax and estate planning matters for wealthy multinational families,” as well as “executives, Internet entrepreneurs, art collectors and investors, professionals and real estate developers, among others,” according to its website.

Oliver’s lawyer at the firm was Jay Waxenberg, who “focuses his practice on estate and tax planning and estate and trust administration.” Waxenberg, the website goes on, “represents many families with significant multigenerational wealth, and has assisted them in the structuring of their estate plans so as to minimize gift, estate and generation-skipping taxes in the transmission of their wealth through several generations.”

In other words, Waxenberg is exactly the type of fancy pants attorney who helps his 1 percent clientele get the tax breaks and use the loopholes that Oliver gets such mileage deriding on TV.

In Oliver’s case, Waxenberg set up two revocable trusts — JO, named for John Oliver, and KNO, named for his wife Kate Norley Oliver — with Waxenberg as the trustee and his law firm serving as the trusts’ registered address. The trusts were then used to create a shell company called Hoagie’s Place LLC, named for Oliver’s beloved dog. Incidentally, Kate Norley Oliver’s New York voter registration shows she is a Democrat and lives in the penthouse in question.

In 2015, Oliver and his wife used Hoagie’s Place to purchase a 39th floor penthouse in an Upper West Side building overlooking the Hudson River for $9.5 million. Property records show they put half down and took out a $4.75 million mortgage from J.P. Morgan. Neither Oliver nor his wife’s name appears on the mortgage, or any of the other property records discussed in this story. Hoagie’s Place is identified as the buyer in the mortgage, but its listed address is an office building in Encino, California that houses dozens of shell corporations and revocable trusts.

The New York Times reported on the sale of the penthouse in 2015, saying it had four bedrooms and four and a half baths spread over 3,096 square feet of interior space. “It features Brazilian cherry hardwood floors throughout, a glass-walled corner great room and a terrace that provides panoramic views of the city skyline, the Hudson River and the George Washington Bridge.”

The story said that the seller was Andre Crawford-Brunt, the global head of equities trading for Deutsche Bank (who has since left the company), while “the buyer’s identity was shielded by the limited liability company Hoagie’s Place.”

Oliver’s neighbors in the building include Jeff Enslin, a hedge fund manager who has worked for Caxton Associates. That fund was created by Bruce Kovner, the well-known right-wing donor whose friends include former Vice President Dick Cheney.

Oliver benefits from New York’s property tax system, which offers huge advantages to residents of rich enclaves like the one where he lives. For example, even though Oliver paid $9.5 million for his penthouse, the city assessed its market value for tax purposes at just $1.3 million. However, only $515,000 of that amount was billable for property taxes. At a rate of 12.8 percent, Oliver normally would have paid $66,390.

However, property tax records show that, thanks to Trump and Roy Cohn, Oliver gets the very generous 421-a tax break on the penthouse. Hence, his property’s billable value after the exemption plunged by over $300,000, and he owed just $27,343 for 2016. That comes out to a property tax rate of roughly 0.25 percent, which would make Ronald Reagan and Ayn Rand dance in their graves from happiness.

The Observer sought comment from Oliver through Avalon Management, which represents him, but did not receive a reply to a phone message or email.

One of the best things Trump has going for him is the clueless nature of his enemies, and their great distance from so many Americans. And that’s precisely why Trump’s charge that prominent journalists and celebrities are the “opposition party” resonates with so many of his supporters.

Meanwhile, Oliver, a prominent member of the pampered class who argues for closing the wealth gap, turns out to have his nose as deeply in the tax trough as the Wall Street financiers and corporations he criticizes on his show.