You can think you know every interesting/wacky/controversial phrase out there, but leave it to SVU to introduce you to a new one, and not only define it but also craft a story that will spur lots of conversation. (Making a prediction here — see ‘Stealthing’ in season 19.)

This episode opens with a church group from Indiana visiting Times Square but quickly leaving after being horrified at the (absolutely normal) goings on there.

Back at their hotel, members of the group hang in the bar area for some reason (but are shocked that the bartender wants them to buy actual alcoholic drinks and not just sodas). Ann and Lucas, two devout members of the non-descript religious sect, spend some time relaxing with Ann’s friend Lydia.

Later, when a chaperone shows up at Ann’s hotel room to tell her that it’s time for lights out, Lydia steps from the shadows, clearly having been there the whole time. As Lydia, who lives in New York and isn’t staying at the hotel, is about to leave, the two young share an embrace that feels a little bit too long, indicating that these two might be more than just friends. With that, Ann slips her room key into Lydia’s pocket.

After Lydia leaves, someone knocks on Ann’s door. She doesn’t seem scared by this unseen individual.

When Lydia makes her way back to the room just a bit later, she finds Ann crumpled on the floor and calls 911. Once the detectives are on the scene, Ann is cryptic about what happened but, eventually, she comes clean and admits that Lucas assaulted her.

But Ann, steadfast in her beliefs, really feels that Lucas didn’t actually rape her. When questioned, Lucas explains that he did have sex with Ann but it was a ‘curative’ measure, aka curative intercourse – because Ann might be gay.

At this point, Ann admits that she has feelings for Lydia but that she’d never acted on them because in her (again, not well defined) religion it’s a sin to be gay.

When Lucas is put on trial for assaulting Ann, his crafty attorney repeatedly tries to use Ann and Lucas’ religious beliefs to discount the rape and win the case against his client.

Just when it looks like things aren’t going Barba’s way and that Lucas might get off, Benson, Carisi and Rollins discover some interesting facts about Lucas’ mentor, Reverend Gary. Barba believes that Reverend Gary ordered Lucas to force Ann to have curative intercourse (aka as rape.) Turns out that ‘s exactly what the Reverend did, but not only to try to cure Ann, but to cure Lucas as well as it’s discovered that Lucas has some homosexual tendencies too. So, the Rev thought the curative intercourse would work for both Anne and Lucas.

In the end, Lucas received a four-year sentence for raping Ann and in an interesting twist, Ann visits him in prison and tells him that she forgives him.

So there you have it, the phrase of the evening – curative intercourse. Not something you hear in regular conversation, right? Let’s just go ahead and put that in our book of ‘Things Learned By Watching SVU.” Sadly, many of these things are pretty cringe-worthy, and this is certainly no exception.

If you think about it, on the surface this episode may have seemed like it was about faith, and conviction in the ideals purported by that faith, but at its bare bones it was a Reverend ordering someone to commit a horrific act that undeniably scarred both the perpetrator and the recipient. (Side note: Never trust a ‘Reverend’ on this series, with the exception of Reverend Curtis, right?)

The most meaningful and shocking line in the episode was Rollins just plainly stating, “You can rape the gay out someone.” That line could have been cut as the audience can pretty much get to that conclusion on their own, but thankfully it’s in there – because it absolutely needs to be. Sometimes, the SVU detectives (or the writers, when you really think about it) tend to sidestep saying the thing that they really need to say in order to be sort of gentle in their handling of victims (and maybe the viewers as well.) But, every once in a while they need to just say things like this; to dive into the harsh reality and plainly state some of the truly sick ideals out there that lead to these kinds of crimes.

This was one of those unique episodes that wasn’t about who did it but why they did it. The exploration of all of the underlying reasoning was certainly the most intriguing part of this story, and the hardest part to understand and digest as well. (Oh, and it was interesting to hear Olivia Benson say that she believes in God. 18 years in and I don’t think we’ve ever heard her state any of her personal religious beliefs, right? Ahhh, still learning about the motivations of our heroine – surely one of the reasons for the 18, excuse me, 19 years of this series.)

The biggest thing to take away from this episode is that no love is wrong and that if you’re gay you do not need to be cured or fixed. Don’t ever let anyone try to make you believe otherwise. 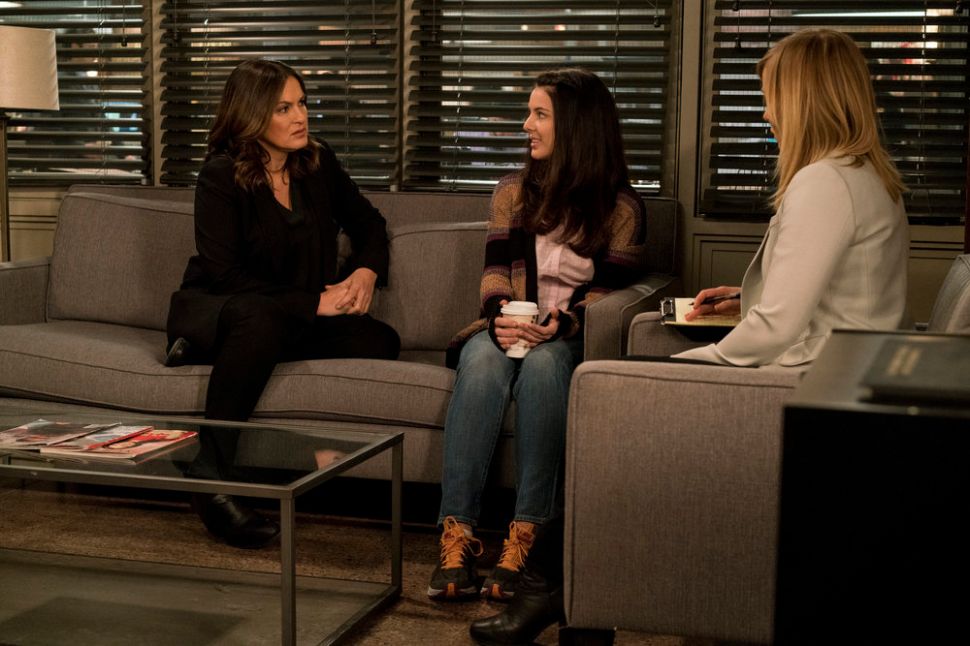