Via an extremely disturbing rape and murder investigation, the two-hour season finale of SVU moved into some treacherous territory by examining the current hot-button issues of illegal immigration and all the emotions that this topic elicits.

To crack the case, both Lieutenant Benson and ADA Barba found their moral compasses severely challenged.

The episode opened with three masked men in the midst of terrorizing a Muslim family inside the restaurant the family owns. The intruders rape both of the adult daughters then kill one of them, while also killing the patriarch of the family. They make their reasoning for the vicious attack clear by leaving a spray painted message behind, reading “Muslims Must Die.”

Tracking the evidence Benson and the team discover that there was someone else in the building during the rampage and they quickly learn that it was Yusef, whose sister Maya ran the restaurant with her husband and daughters. He admits to the detectives that he didn’t initially come forward because he’s in the country illegally, and he’s gay, which means if he’s deported he’ll likely be killed.

After a bit of convincing and some guarantees that the SVU squad won’t let him be deported, Yusef admits that he can identify one of the assailants – a former restaurant employee named Hector Ramirez.

Unfortunately, just like that, Yusef is scooped up by Immigration and Customs Enforcement officers, who quickly deport him.

With their only witness gone, Benson decides to take another route to get to Hector; she leans on his wife, Soledad to say that Hector wasn’t with her the night of the incident. Soledad refuses to cooperate so Benson plays her hand and threatens Soledad, who is an illegal from El Salvador, with deportation. As she’s making the call, Soledad gives in and blurts out that Hector wasn’t with her that night, so now he has no alibi.

Then, along with getting Hector to admit that he was there that night, the detectives also get him to point the finger at his white accomplices, who are two raving racists named Mitchell and Steven. Hector says that he was there, but that he only went along to rob the place, that the other two men are responsible for raping and murdering the family members.

After Hector testifies in front of a grand jury, he’s gunned down outside the courthouse by another white supremacist.

With one witness deported and the other dead, the case against the remaining two suspects is extremely weak…. until Maya suddenly remembers seeing the faces of Mitchell and Steven on the night of the attack. On the witness stand she testifies that she didn’t offer this information at first because the men threatened to come back and kill her if she said anything, but now she feels strong enough to do it.

Then she drops a bombshell, while still sitting in front of the packed courtroom, she says she told Benson that she saw the men’s faces and could identify them weeks before Hector’s death.

When Benson tells Barba that no such thing happened, he sort of encourages Benson to say that it had — for the sake of putting away two men who committed rape and murder.

There are a few tense moments as Benson takes the stand – will she lie or won’t she? She doesn’t.

Benson decides to try to tackle this way, using a method that she’s just recently employed – going after the wife of one of the defendants. The woman takes the stand and crushes her husband’s alibi, who then has a violent outburst in court, thus sealing the fate of the two defendants.

The thrill of the hard fought victory is short-lived for Benson and Barba however when Chief Dodds shows and informs them that a mosque in East Harlem has just been firebombed, leaving five dead. Silent disgust fills the room.

In this two hour like movie, there were a lot of moving parts – the rape and murder case which led to everyone, in their own way, questioning governmental leadership, commenting on the concept of sanctuary cities, exploring the current climate of racial tension in the US, and probably most importantly, each individual assessing what he/she is willing to do to personally to stay within the ethical parameters they’ve set for themselves.

Case in point are the actions of Barba. It was curious that he would push Benson to lie on the stand about her interaction with Maya. But, Barba, as he has proudly stated in the past, and during this case, is a Cuban-American. Was his judgment clouded a bit in prosecuting this hate crime and these men? Maybe, maybe not, but whatever the reason, this seemed a bit out of his nature. However, in a recent episode he did admit to some backward dealings to convict a client — and he was suspended for it. It’s hard to believe that he would knowingly go down that road again. So for the sake of preserving the Barba that we’ve all come to know and love, let’s assume it was this case and the heinousness of it, along with the statement he wanted a conviction to make, that drove him even suggest such a thing.

And how about Benson? We all know that lying isn’t something that she ever purports to do, but there was a split second there where you thought she might just do it, right? It was quite a relief when she didn’t.

But, playing devil’s advocate here, there was a time during all of this when Benson could have lied to help the case. Think about this — If she knew she was going to really threaten Soledad with deportation before she even brought Soledad into her office, she could have set up that phone call to just make it look like she was calling ICE. You know, prearranging a fake call to ICE in which an actual SVU squad member was on the other end of the line. That seems to be more in line with the Benson we know, right?

That scene seemed a little too convoluted given that Benson had just been on a chase to keep Yusef from getting deported. So she wants to keep one man from being deported to help her case but has no qualms about deporting this mother? Oh yeah, she was threatening Soledad’s deportation to help her case. So it really seemed like her every action was about her case, everything else be damned. We all know that Benson works hard to make a case and that she was livid about what happened to this Muslim family, but it’s a little difficult to believe that this is the route she would go to get what she needed to secure a conviction.

At least there wasn’t a sugarcoating of any of the hate in this episode. When one of the murderer/rapists says, and quite proudly, “Mexicans love tequila and raping. Just ask the president,” it doesn’t seem so hard to understand just how we got here.

And, another element that wasn’t muddled at all was the underlying premise of this episode – that there’s chaos in this country and unfortunately this seems to be the new normal.

Like in life, there was no tidy conclusion to this episode of SVU. The last line about the bombing of the mosque shows that sadly this is the world we live in now.

All of this can be examined a million different ways and all of them are a painful reminder that right now, in this day and age, there simply is no peace. Hatred truly exists.

Looking at it as a whole, one might say that theme of season 18 of SVU appears have been centered around the issues of ethics and morality and the apparent paradigm shift in these areas that continues to evolve as each day passes. These are tough topics to discuss, but we must if there’s to be hope for the future. And, if there’s one thing that 18 seasons of SVU has taught us, it’s that there’s always room for hope. 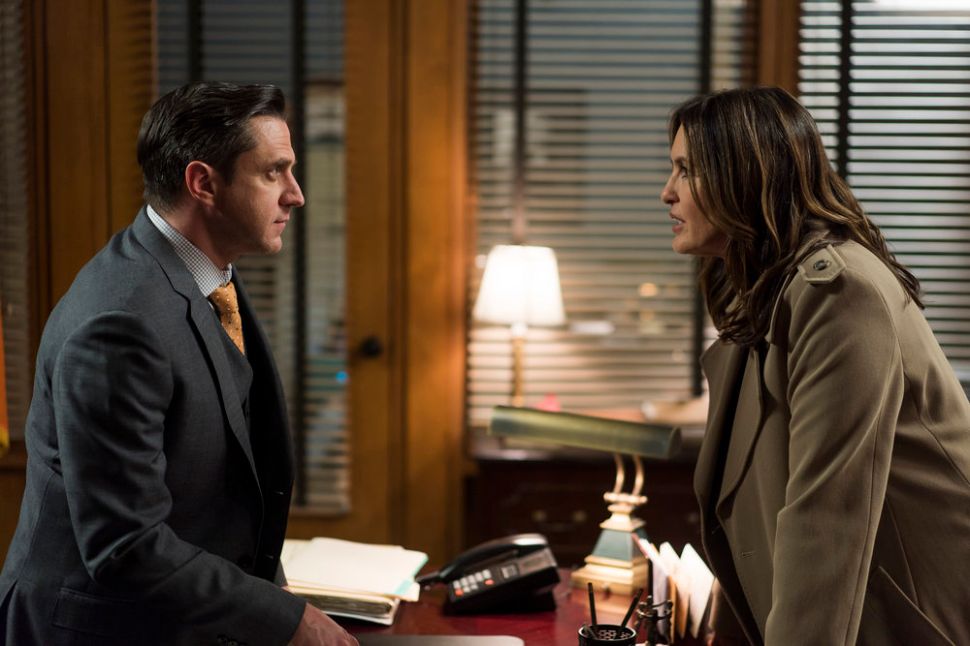