What kind of filter do you use to determine what’s fake and what’s real? Seems like everyone has his or her own system. But, in this day and age, with the proliferation of the internet, which many people use as their sole sort of information, deciphering what’s actually real and what’s truly fake seems to have become extremely difficult for a portion of the population.

Add to this that there are individuals out there who thrive on putting out supposed reports that have no foundation in fact, and all of it is a recipe for complete chaos.

SVU’s take on the phenomenon of fake news begins when a congressman, Luke Bolton, practically begs Lieutenant Benson to help him clear his name after a website claims that he has ties to a sex trafficking ring at a Chinese restaurant.

To help out the Congressmen, and to make sure there isn’t really a sex ring running out of the establishment, Benson sends Fin and Carisi to check it out.

In a stroke of utterly perfect timing, Fin and Carisi are in the restaurant when a camo-wearing dude with a hunting rifle rushes in, shouting that he’s come to save the teenage girls he believes are being held there. The dude gets so upset when no one will listen to him that he fires a shot. This is when Fin and Carisi know that he’s serious, drawing their guns. After a short but intense standoff, the detectives take him into custody.

After thoroughly checking the restaurant, the Fin and Carisi report back to Benson that there’s nothing out of the ordinary going on there; it’s just an establishment serving food.

After all of this, the team decides it’s time to go after the website that published the ‘reports’ about Bolton and the restaurant. It turns out to be just one guy running the website, entitled The Endless Truth, out of his apartment.

Ron Duca, who runs the site, won’t budge on his belief that Bolton and the restaurant are involved in sex trafficking. He points to some emails from Bolton’s account that were anonymously sent to him. The emails, while not convincing to Benson and the team, do send them to the congressmen’s house to confiscate his computer.

Duca, still believing that there is an actual sex ring being run out of the Chinese restaurant and that the NYPD is in on it, goes after Olivia and Amanda, posting that they’re both mothers to ‘fatherless’ children. He goes so far as to insinuate that Olivia, who he says had no child and then suddenly had a baby, acquired her son from a sex worker.  (which is ‘sort of’ how she actually got Noah, right?? Interesting touch there…)

Fearing for their kids, Olivia and Amanda send them off with Lucy to Lucy’s parents house in Jersey for safety.

In an unexpected twist, while investigating all of Duca’s fake news, the SVU detectives realize that they’ve actually found a real sex ring among his information. Upon discovering this, they quickly set out to bring the ring down. It takes a bit, but after they’re able to connect with one girl they find the rest of the victims and rescue them as well.

That part of her job done, Olivia sets out to confront Duca. She demands that he post a retraction to the story about her and Amanda. When he does, Lucy brings the kids back to their moms in the squad room.

Just as Liv is about to take Noah home, her cell buzzes. Sadly, she’s been called to the Chinese restaurant again. There she finds congressmen Bolton dead on the floor. He came to the restaurant to show people in the neighborhood that it was safe, even bringing his teen-aged daughter. Unfortunately, a man seeing the congressmen with a young girl at the restaurant believed he was actually involved in a real sex ring and shot him. His teen daughter, who witnessed the event, cries as she sits nearby.

While nearly every SVU plot has someone lying about something, what’s interesting in this storyline is the level of belief that was exhibited by several of the individuals involved in this storyline; Among them, the gun-wielding camo guy at the top, Duca, and the straight out murderer at the end.

All of these people believe that they knew the absolute truth, whether facts were present or not. Sadly, this is a pretty good representation of the world that we live in right now. The internet, while certainly great for the dissemination of real news, is also the perfect place to fuel the fires of conspiracy, and it’s alarming just how little it takes to get some people onboard.

This story, rooted in fact (see 2016’s  ‘Pizzagate’), got some things right – mainly that Duca was a one man band making a lot of money from website ads, while relying on his readers (or more appropriately, his ‘followers’) to provide leads and information, and that there is now a whole band of ‘self investigators’ who, with no experience whatsoever, take it upon themselves to find ‘the truth,’ no matter how skewed or ridiculous it is. It seems rather shocking that any of this occurs, but these are the times we live in.

One thing the Internet has proven is that once something is out there, no matter if it’s deleted immediately, it’s most likely still left an impression on someone somewhere. Things just can’t be taken back that easily anymore, not with the speed with which information, whether truthful or not, travels now.

What wasn’t entirely accurate, or was maybe more of a cliché than it needed to be, was the camo-wearing dude. Sure, it’s easy to make that guy someone who looks like he might be from the country as the majority of people think that everyone who lives outside the city is less knowledgeable and more likely to believe anything, but the truth is that’s not always the case. In short, city folk think country folk are dumb so maybe the writers thought, ‘let’s make this guy a dumb jackass from the farm, that’s more believable.’ Sure, that’s what everyone wants to believe, but it’s just not true. There are conspiracy theorists everywhere; some of them even wear suits every day.

But, letting that slide, a good point that was made here is that consumers should be careful about where they get their news. A good way to start is by looking at the person or people behind the news organization. First, if it’s just one person working out of an apartment there’s a red flag. Real news organizations have actual office space and hire trained journalists. Those journalists carefully investigate and vet every fact of every story that they print. They know that if they don’t follow strict journalist procedures they’re subject to lawsuits galore.

Now, we could delve into the fact that the President of the United States is constantly calling out nearly every news organization as fake, even credible ones with longstanding histories of factual reporting, but that would move this discussion into a far deeper one that can be explored here. So for now, that’s all we’ll say about that.

Add to this that right now the courts are struggling with the ever changing role of the First Amendment with regard to the explosion of ‘news’ sites via the internet and there’s no doubt that this is a volatile time for both news producers and news consumers alike. (If you want to read a fascinating study on this, here’s a piece from Alabama Law Review that is the basis for study in a Harvard class entitled The Constitution and The Media – a timely class if ever there was one.)

In the end, this was one of the more complex episodes of SVU this season. While there was an actual sex crime and the team did bring down a trafficking ring, it was more about exploring the belief structure of consumers, a tough topic to tackle on any series, let alone on a procedural drama.

As is the case on every SVU, there was an assessment of reasonable doubt – who do you believe and why? This episode showed that consumers are charged with making their decisions about reasonable doubt on a daily basis (not just during legal proceedings as is usual shown here) when they take in anything that’s being marketed as news.

All of this — deciphering real from fake — comes down to individual choice and individual judgment, using personal knowledge and analytical skills to determine what to believe and what not to believe. That seems like a somewhat informal task for reasonable individuals, but sadly it’s becoming increasingly difficult.

But, let’s remember that SVU, in reality, is a scripted series. Writers make up what happens here. This is purely fiction and is not to be confused with fact. Remember, that whatever its intent and whatever action it spurs, even as when comes from a story based on a real-life incident, it still isn’t real.

Just like so many other things, watching this episode of SVU is an exercise in separating fact from fiction – something that seems like a simple concept, but yet somehow gets harder as time passes. I think we can all agree, that part is very real. 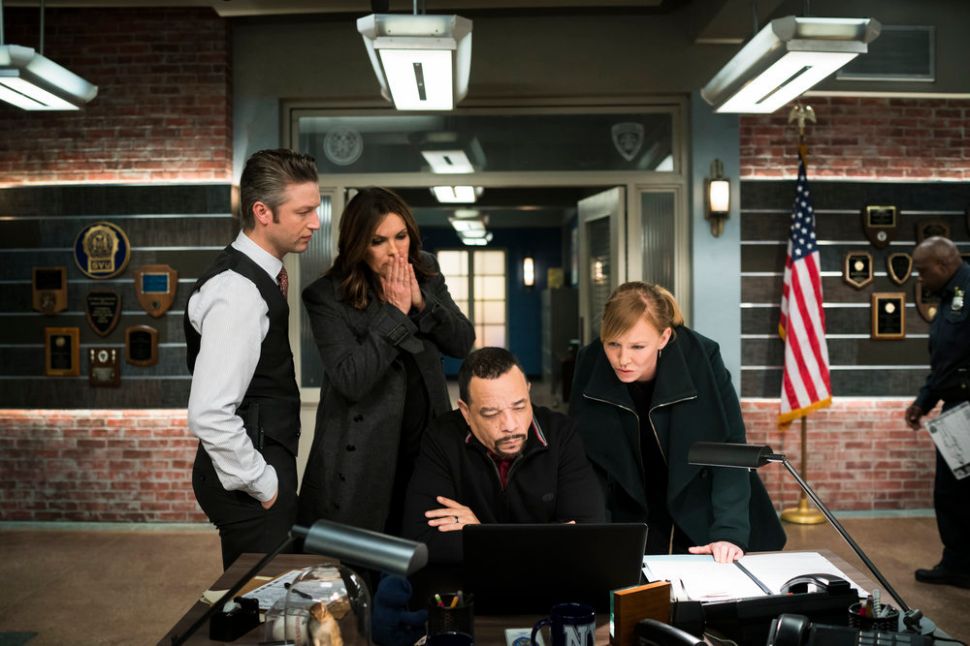