TALLINN—This is the NATO capital closest to Mother Russia. Estonia is not, as Team Trump stalwart Newt Gingrich bizarrely put it last year, “in the suburbs of St. Petersburg,” yet it is undeniably too close to Russia for the comfort of many Estonians. Gingrich’s comment made Estonians—and plenty of other Europeans—wonder about the commitment of then-candidate Donald Trump to NATO and collective security.

Those fears have been ameliorated somewhat by now-President Trump’s recent statement that NATO, which he only a few months ago derided as “obsolete,” is suddenly no longer so. Instead, the Atlantic Alliance is now a “bulwark of international peace and stability,” according to Trump, who didn’t explain how NATO had miraculously changed so quickly. This is reassuring to our European partners, particularly those living close to Russia, yet puzzling all the same.

This sense of befuddlement was front and center at this year’s Lennart Meri Conference in Tallinn, the preeminent security get-together in northern Europe. It attracts politicians, security practitioners, think-tank wonks, and journalists from all over the world. With the departure of the remarkable Toomas Ilves from Estonia’s presidency last fall after a decade in the job, there were questions about the conference’s future, given how strongly Ilves had sponsored the event, seeing it as an important anchor for his embattled little country in Western political and security structures.

Happily, the conference lives on and keeps asking important questions about pressing security issues. This year’s topic, “Darkest Before Dawn?: The War on Trust and How to Win It,” couldn’t be more relevant, coming just a week after Russia’s embarrassingly failed efforts to swing France’s presidential election Moscow’s way. Few cared to note too loudly, at least in open session, that identical Kremlin tricks worked in the United States last November.

As with all such events, the important conversations at the Lennart Meri Conference happen offline, when experts from different countries speak their minds without cameras on them. The mood at this year’s event can be charitably termed somber. While there is elation that France—demonstrating a public maturity, especially regarding the media, that was altogether lacking in America in 2016—beat back Vladimir Putin’s unsubtle push to install his far-right fangirl Marine Le Pen in the Élysée Palace, nobody who knows the Russians thinks this is more than a temporary respite.

Putin will continue employing the unpleasant tactics of his semi-secret Special War against the West—espionage, propaganda, and subversion combined to harm and intimidate the Kremlin’s opponents abroad—and not every targeted country may be as fortunate as France. Germany’s elections are coming in September, and although the weekend’s regional elections in North Rhine Westphalia were encouraging, it’s too soon to become complacent. NRW, a large and politically important German state, is considered a bellwether of sorts—and the dismal showing of the far-right Alternative for Germany, which got a mere 7.4 percent at the polls, indicates that Putin’s friends there may have politically stagnated.

Hanging over all the conversations in Tallinn was the knotty issue of President Trump. Numerous experts of all ideological stripes expressed concerns that if—and more likely when—a serious international crisis hits this White House, Trump and his motley crew won’t be up to the task of high-pressure decision-making. While the presence of accomplished security professionals such as Secretary of Defense Jim Mattis and National Security Advisor H. R. McMaster—both top military men of a scholarly bent and balanced demeanor—provides a sense of relief, nobody is quite sure who’s really calling the shots in the West Wing.

Trump’s domestic decisions allow for little comfort. If the president falls back on his inner circle of advisors—mainly his relatives and a few hangers-on, none of whom have any experience in global or military affairs—to get through an international crisis, terrible things may follow. “It’s a bit like North Korea, really,” explained a senior European security official: “We can’t tell who’s running the show in Washington. Is it the Supreme Leader and his sycophants, or people who actually know how to do things? And we’re not sure the people in the White House are, either.”

The ever-growing scandal about Trump and his possible Russia connections throws another wrench into discussions of what foreign policy path the new administration is taking. There was disbelief in Tallinn about how President Trump fired FBI Director James Comey, obviously over the KremlinGate investigation, then mangled his own cover story, then proceeded to publicly threaten Comey with what Russian spies term kompromat. “This is tin-pot dictatorship stuff,” opined a European diplomat who spent considerable time in Washington. “I never thought this could happen in America,” the diplomat added with a frown.

Current events are difficult to watch, especially for Estonians and other NATO members who spent the last Cold War on the losing side, through no choice of their own. For those enslaved by the Soviets, the United States was a beacon of law, liberty and democracy, and to see American politics descend into ugly farce under President Trump makes for a depressing spectacle.

Europeans are hardly alone here. The danger to the venerable American system of checks-and-balances presented by Trump and his cavalier attitude toward the rule of law was just expressed concisely by James Clapper—who until recently was the Director of National Intelligence—when he stated that with Trump in the White House, “our institutions are under assault internally.” Clapper further pronounced that the president’s unceremonious removal of the FBI director, who was leading the counterintelligence investigation of Team Trump, represents “another victory on the scoreboard” for Russia.

There is hearty agreement with Clapper’s views among people I’ve spoken to at this year’s Lennart Meri Conference. Security experts in this region, right on the Kremlin’s doorstep, were not surprised by Russian interference in American politics—after all, Putin’s spies harass, intimidate, and infiltrate all the Baltic republics almost casually. But they were surprised that this interference actually worked. Nobody in Tallinn was making official guesses as to what happens next in Washington. However, there is broad agreement that NATO and the West only have a future if we stand up to Russian clandestine political games like the French did in 2017—and not like Americans failed to do in 2016. 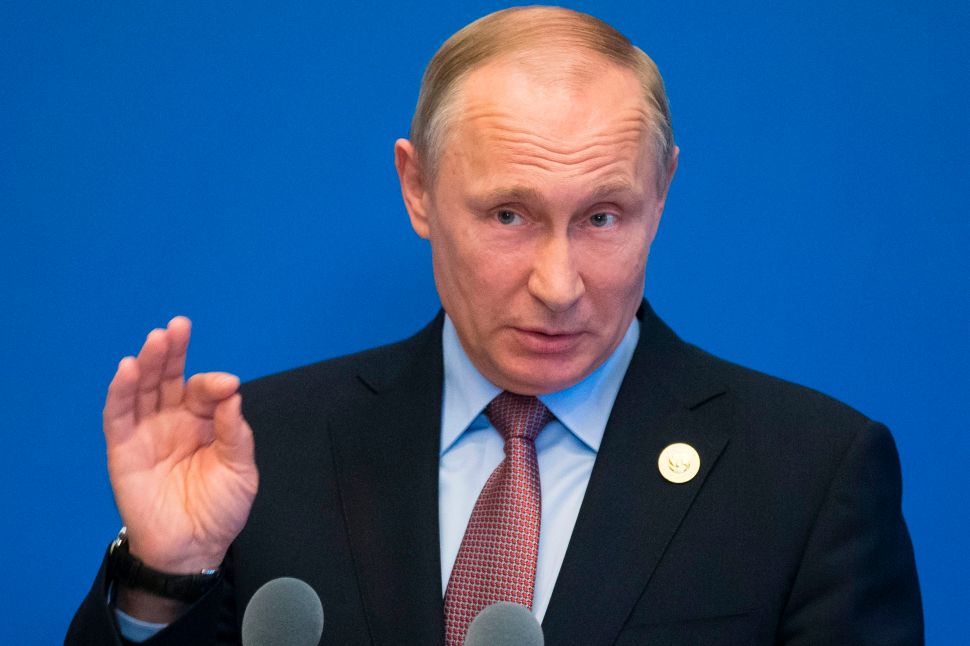