And just like that, this year’s gubernatorial primary debates are a thing of the past.

The Republicans gave a good and wonky show, but it didn’t seem to change the fundamentals of their race.

Ciattarelli, the self-made businessman and assemblyman from Somerset County, showed off a crisp command of the issues and unleashed plenty of sharp attacks against Guadagno throughout the night. For her part, the lieutenant governor and former federal prosecutor gave a steady performance amid many tough questions on her property tax circuit breaker and her pledge to turn the attorney general’s office into an elected position, among other campaign planks.

To the extent that Ciattarelli needed a knockout punch, he didn’t seem to land one tonight, although he did try to punch holes all over Guadagno’s blueprints and her Christie-heavy resume.

Guadagno had the most to lose tonight, and seemed to successfully defend her lead in the polls. And she has the fundraising advantage over Ciattarelli heading into the June 6 primary.

Guadagno: “I am going to help the people who need the most help now,” she said, vowing to fix school funding and avoid tax increases. “The people of New Jersey simply can’t afford it anymore. I am going to fight for you. I need you to fight for me.“

Ciattarelli: “I am running for governor because I have a plan, a very, very specific plan to turn this state around,” he said. Guadagno is too closely linked to the unpopular Christie, he indicated, and would be a drag on down-ballot races and a weak candidate against the well-funded Democratic front-runner, Phil Murphy. “I have a plan; she doesn’t. And I can beat Phil Murphy.”

And that’s that. Stay tuned for Alyana’s story wrapping up tonight’s debate. And thanks for following along. We leave you with some wisdom gleaned from Twitter.

I would give @JackCiattarelli the win tonight in the #njprimarydebate.

And here are the results on issues most important to viewers. #NJPrimaryDebate pic.twitter.com/P6DIEttI0U

They may disagree on how to pick the attorney general, but one thing is clear after two debates — Ciattarelli and Guadagno largely agree on major law enforcement questions.

On legalizing marijuana? Both of them favor decriminalizing the drug and New Jersey’s existing medical marijuana program, but not full legalization as the Democratic candidates say is needed to reform the state’s criminal justice system.

On loosening New Jersey’s tough restrictions on concealed-carry handgun permits? Ciattarelli and Guadagno both said the state’s current law — upheld as recently as 2014 by the U.S. Court of Appeals for the 3rd Circuit as a reasonable and constitutional public-safety measure — should be opened up to allow more people in dangerous lines of work to pack heat.

9:12 p.m.: No One Talks About the Cost of Holding An Election for AG

That’s a joke. But picking a good state attorney general is no joke at all.

Running in a post-Bridgegate world, Guadagno has pledged to change New Jersey law so that voters, not the governor, select the state attorney general.

Ciattarelli is having none of it.

“In a state where Democrats outnumber Republicans by 800,000, I can’t think of a worse idea,” he said. “Are we now going to have an attorney general who’s indebted to the party bosses?”

New Jersey’s neighbor to the south, Pennsylvania, hasn’t had a great track record with its elections for attorney general, he added. The last one, Kathleen Kane, was sentenced to prison for perjury and a litany of misdemeanors as part of a scandal called “Porngate.” Yep, “Porngate.”

“Take a look at what’s happened in Pennsylvania over and over again,” Ciattarelli said.

Guadagno said she understands “exactly what the problem is.” But she adds, “States all over the country have been doing this on a regular basis, 43 of them.” And she says she trusts people more than politicians to make the right choice.

“She’s saying she can’t be trusted to appoint an AG who’s beyond reproach,” Ciattarelli said.

Ciattarelli accused Guadagno of hypocrisy for attacking his tax plan — a sweeping proposal with a multitude of component parts, including a tax increase on residents earning above $750,000, coupled with dramatic reductions including abolishing the inheritance tax and the corporate business tax over 10 years.

Guadagno said earlier in the debate that she would never raise any tax in New Jersey. But Ciattarelli noted that Guadagno has endorsed a return to the Regional Greenhouse Gas Initiative, a cap-and-trade program premised on a carbon tax.

For Guadagno, rejoining RGGI is one part of a larger response to climate change.

“We have to admit that we have a climate problem,” she said. “I worked on Sandy, Jonas, Irene, 17 different snowstorms. I am not a climate denier and never will be but we have to do something to respond … and that’s what we’re doing.”

She added, “If you lived on the Jersey Shore like I do and you saw your neighbors on both sides wiped out, you know that we need to have a diversified response.”

Ciattarelli taunts Guadagno, who has often assumed the job of acting governor, for not vetoing more bills during Christie’s out-of-state jaunts. Guadagno noted that she vetoed one bill (while Christie was in Cleveland for a Republican presidential primary debate) but scolded Ciattarelli for suggesting that she could use the veto pen to undermine Christie while he was away.

“That’s not what the constitution intends,” she said. “When you start to talk like that, Jack, it really does cross the line.”

Earlier in the debate, Guadagno took a shot at Christie for a new $29 million program to outfit buses with 360-degree cameras — a safety measure.

“Just yesterday, the governor spent $29 million on a bus camera, and I just couldn’t believe my eyes,” she said.

Someone forgot to tell @Ciattarelli2017 to start every rebuttal: "I disagree with Chris Christie's lieutenant …" #njprimarydebate

Aron turns to transportation, and for Guadagno, the plan centers around multiple audits of state agencies including New Jersey Transit to see where mergers can happen and where money can be saved. The plan is similar to one floated recently by state Sen. Jennifer Beck (R-Monmouth), who predicted that merging six transportation agencies into one would save hundreds of millions in the budget.

Ciattarelli sort of agrees, proposing to merge the Department of Transportation, NJ Transit and the Motor Vehicles Commission immediately as a transparency-enhancing move.  Ciattarelli also touched on a detailed transit plan he rolled out earlier this month that would reprioritize funds from the 23 cent gas tax hike to repair rail lines, even if those lines are owned by Amtrak.

As in last week’s Republican debate, the heart of the policy disagreement between Ciattarelli and Guadagno is how to tackle New Jersey’s sky-high property tax rates.

Guadagno has proposed a new tax credit of up to $3,000 a year. The tax relief would come quickly for beleaguered homeowners, but the plan has a big price tag, $1.5 billion a year from the $35 billion state budget during lean times, and it relies on a hazy mix of funding sources, including an “audit of Trenton” that Guadagno says would produce $250 million.

Ciattarelli wants a sweeping rewrite of New Jersey’s School Funding Reform Act of 2008, redistributing state aid from some historically poor but now economically booming cities such as Hoboken and Jersey City to rural and suburban districts, some of which have been teaching kids in trailer parks or struggling to accommodate a huge enrollment growth of poor and minority students. Republicans have long yearned for these changes, but Ciattarelli would have little hope of getting it through a Democratic-controlled Legislature.

Ciattarelli said Guadagno’s property tax credit is irresponsible because she hasn’t identified stable funding sources in the budget to cover the cost. And he noted that state Treasurer Ford Scudder disclosed a $527 million budget shortfall just this week, illustrating the perils.

“It’s a promise that can’t be kept,” Ciattarelli said, and suggested Guadagno was “either oblivious, disingenuous or just doesn’t want to do the heavy lifting” of attacking the root cause of the property tax problem — a dysfunctional school funding formula that sends too much aid to booming cities and not enough to starved suburbs and rural areas.

“We can do it if we have the will to do it,” Guadagno said about her plan. She agreed with Ciattarelli that the school funding formula badly needs a rewrite, but said families need tax relief immediately first.

“The most important thing is we help the people who need the help most while we take all of the time it’s going to take to fix the school funding formula,” she said, describing it as a long process that starts in the Legislature and would likely end at the state Supreme Court.

Aron asked Ciattarelli whether his plan would hurt cities such as Newark, taking away state aid and forcing property tax increases to cover school costs in what is New Jersey’s largest district.

“Doesn’t that impose an enormous hardship on poverty-stricken cities?” he asked Ciattarelli.

The assemblyman responded that he would ensure every student gets a “thorough and efficient education,” as guaranteed by the state constitution. He also deflected questions about Newark and instead focused on Hoboken and Jersey City, which have seen an economic boom in recent years but still receive a large amount of state aid for schools.

“We’ve got an inequity of epic proportions,” Ciattarelli said.

Moderator Michael Aron of NJTV kicks off the debate by noting that neither Ciattarelli nor Guadagno supported President Trump in the November elections. Would either of them welcome Trump on the general election campaign trail? Both of them say yes.

“I’m a citizen first, and I root for our president,” Ciattarelli said. Guadagno: “He’s the duly elected president of the United States and we should be lucky to have him come into our state.”

Expect a lot of tax talk — a key issue for New Jersey voters — which will highlight key policy differences between Ciattarelli and Guadagno. Alyana recapped the dueling proposals here, along with some of the recent attacks between the two GOP standard-bearers.

We don’t know how many primary voters are tuning in for this debate — or the governor’s race in general — amid all the screaming headlines coming from Washington. But tonight feels like a decisive moment for Ciattarelli, who has been gaining some ground on Guadagno — but whose time is running out, with two weeks left to go before Republicans cast their primary ballots June 6.

One voter who didn’t seem very interested: Gov. Chris Christie. He hasn’t come off very well at these debates — taking lumps from both Democrats and Republicans — and will be skipping it.

Christie breezes by press room before GOP debate but says he's not watching but going out. pic.twitter.com/tAIH1xixSB

Assemblyman Jack Ciattarelli and Lt. Gov. Kim Guadagno will debate one last time before the Republican gubernatorial primary on June 6. The two traded some sharp attacks at their first encounter last week at Stockton University. And after weeks of escalating attacks through the press and campaign ads, tonight’s debate is likely to be at least as tense.

Follow this live blog for real-time coverage and background from Observer’s Alyana Alfaro and Salvador Rizzo. The big show, hosted by NJTV and NJ Spotlight, starts at 8 p.m. and you can watch NJTV’s live stream here. 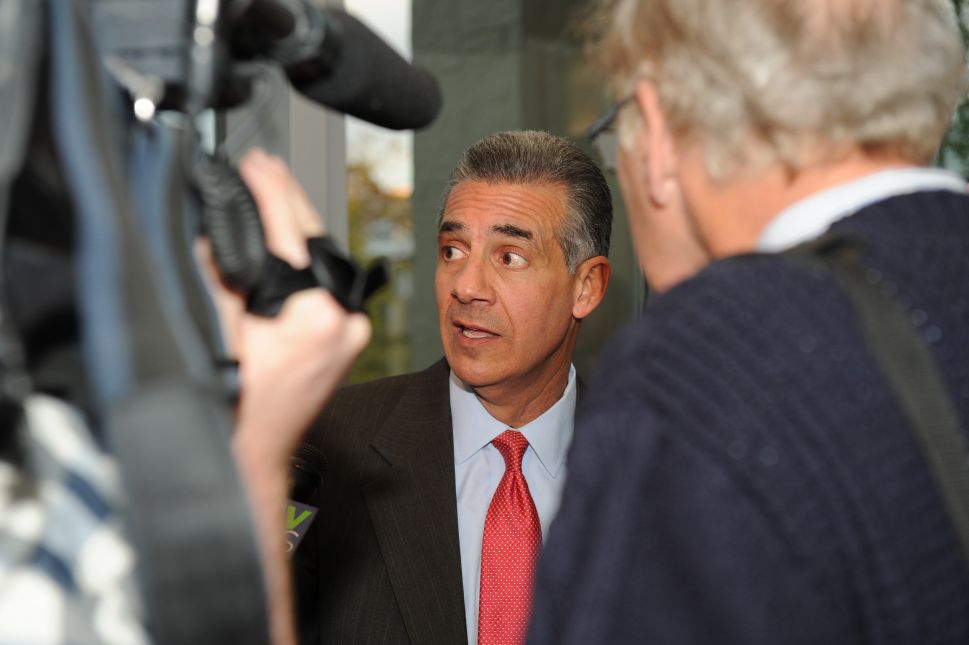