Per the request of Louis Vuitton, and creative director Nicolas Ghesquière, the style set packed their LV monogrammed luggage and caught a flight to Kyoto. Why the long trek? It’s because that’s where the label unveiled their Cruise collection, in a very lavish affair that spanned quite a few days.

And as you can see by the face of Japanese designer, Yoon Ahn, as snapped by street style photographer Nabile Quenum, the most stunning part of the weekend was the setting of the outdoor fashion show. Held at the Miho Museum, right outside of Kyoto, the over-the-top venue was designed by esteemed architect I.M. Pei. You might be familiar with his other work, including the Grand Pyramid at the Louvre, the Four Seasons Hotel in New York and the East Wing of the National Gallery, in Washington D.C.

The Miho Museum is nestled in the Shigaraki Mountains; apparently, one of those summits had to be momentarily displaced in order to construct this art museum. The international destination is tucked into the greenery of the mountainside and the entrance is lined with an impressive lineup of cherry trees.

So naturally, the editors and celebrities who attended the show took advantage of the stunning setting; they posted from every angle on Instagram.

When the hair lines up, you just gotta. Thanks for humoring me, @therealgracecoddington #lvcruise

That included a scenic view of Grace Coddington‘s signature ‘do.

And influencers perching on the white carpeted steps of the runway.

The word “magical” was used liberally to describe the setting. With just the right angle and the appearance of an Instagram famous individual, this museum certainly appeared to be otherworldly.

Bravo @nicolasghesquiere for an amazing show!👏🏼 I couldn't leave without taking a photo in this breathtaking venue ✨🤳🏼" — #LHD Wearing #LouisVuitton full look #LaureHeriardDubreuil

“Breathtaking” was another good description for the setting.

A post shared by Veronika Heilbrunner (@veronikaheilbrunner) on May 14, 2017 at 9:55pm PDT

Even the benches, where attendees viewed the show from, were architectural feats.

When the light is right #IMPEI'S incredible #MihoMuseum overlooking the mountains of Kyoto 🇯🇵, the location for today's #LVCruise show @harpersbazaarus

In case you were wondering, the entire museum is Instagrammable and filled with natural light.

Artistic Director of Women's Collections @nicolasghesquiere with Jennifer Connelly at the #LVCruise Show at the Miho Museum near Kyoto, Japan. Watch the show now at louisvuitton.com

There were even unusual celebrity sightings, including the usual Louis Vuitton muses of Jennifer Connelly and Michelle Williams.

However, Vogue’s Nicole Phelps noticed Japanese designer Kansai Yamamoto admiring his collaboration with the brand from the front row.

Here’s some more admiration of Yamamoto’s designs. However, we find this Instagram from Tyga to be rather tasteless, as he appears to be making himself look squinty eyed. Regardless, at least the rest of the social media posts from the fashion extravaganza were respectful. 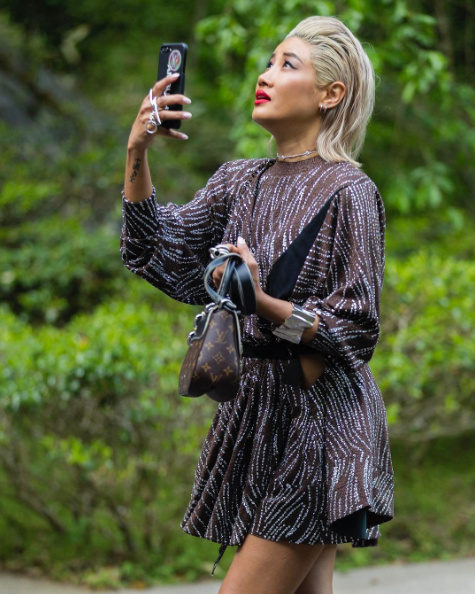