After a recent thread in a feminist group caught the eye of women’s studies Ph.D student Nicole Froio, she asked her Twitter followers to share the most obvious things that have ever been mansplained to them. Of course they delivered with anecdotes that are out of this world.

Quote this tweet with the most obvious thing a man has ever mansplained to you.

This sounds like the beginning of a viral story, but Froio’s post was retweeted just over 100 times. Yet she had hundreds of replies from women sharing their tales, which shows you don’t have to siren too far to find women with stories of misogyny and sexism.

The cringeworthy accounts of mansplaing spanned many topics from the women’s own cultures to their jobs and areas of exepertise. A shocking number of women had men explain their own bodies to them.

Here are some examples:

@NicoleFroio Guy explained part of my PhD topic to me after he attended my talk on exact aspect of said topic, asked if I'd ever considered it. Uh, yes.

@NicoleFroio I had someone try to explain the political history of my home country to me. He'd read an article in a magazine

@NicoleFroio My name. A colleague literally told me I had spelt my own name wrong.

The mission of the national organization whose local chapter I am the president of (this was today). https://t.co/vSCa32XnIk

How to search our library catalog using author and title.

I am a degreed librarian. https://t.co/mbIRYwaryd

The difference in an ale and a lager. I have a whole ass certification in beer tastings and pairings. https://t.co/H7qd27immk

Froio quickly noticed that a lot of this mansplaining had to do with women’s bodies.

There's like 4 instances of cis men mansplaining vaginas & periods to cis women, wtf is up with this trend???

But these types of responses didn’t stop at four.

A man (a paramedic) told me not to worry about giving birth because it was no different or painful than pooping. https://t.co/31kKGohAdM

Breastfeeding. (I've got 7 years total under my belt, no splaining needed) https://t.co/qm7yS5HmYq

Lactation. A man told me I couldnt try bras on in a store because I might get milk on them. When I was 20 and not pregnant https://t.co/gM5LicYaOW

@NicoleFroio A male ob/gyn told me that if I focussed harder on my work or picked up an interesting hobby my menstrual cramps wouldn't bother me so much.

that his colon surgery was worse than childbirth #chilepls https://t.co/aFuGAmesmx

That my cramps were not as bad as I'm making them out to be. I couldn't walk due to the pain. https://t.co/ru7yThf1w4

Childbirth, after I had my son https://t.co/NfUv1OQ8Im

@NicoleFroio What menopause is like during my third year of menopause. 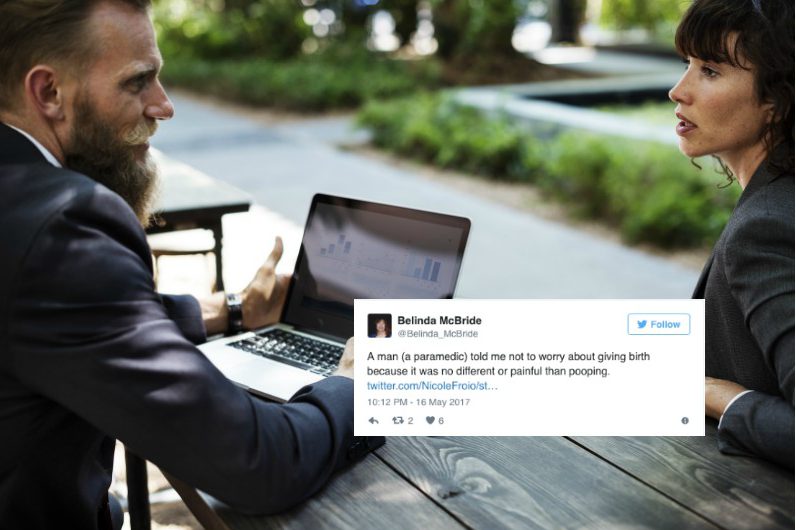