This weekend, Melissa McCarthy joins Saturday Night Live‘s prestigious Five Timer’s Club, joining the likes Bill Murray, The Rock and Scarlett Johansen in hosting the sketch show at least five times. Of course, we all know McCarthy has appeared on SNL quite often in the past year, due in equal parts to her spot-on Sean Spicer impression and in-real-life Sean Spicer’s inability to act like a functional human being, much less the White House’s Press Secretary.

But still, McCarthy is coming, and she’s coming prepared. In fact, you might have caught her preparing if you work in Manhattan, where onlookers got a glimpse of the actress, in full Spicer regalia, zooming down 58th Street on a motorized podium.

I work downtown, near Wall Street, so I get to see a different tourist take a photo next to giant brass bull testicles every day, but this is a whole new level of delightful.

Of course, McCarthy and the rest of the SNL crew aren’t exactly going to be strapped for material. You may remember that a few hours after fearless leader slash former reality show host Donald Trump fired FBI director James Comey for totes legit reasons, Sean Spicer conducted a press conference from the shadows like history’s only recorded sweaty vampire. So, you know, there’s funny jokes to be made somewhere in the middle of all that. 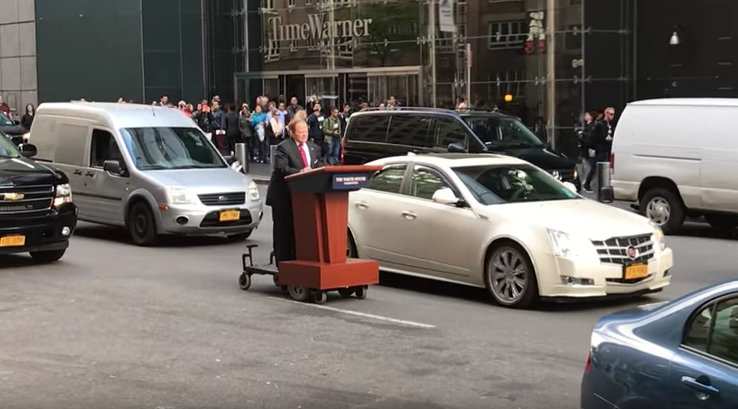