On a sunny spring Tuesday morning, Debra Winger and Tracy Letts sprawl side-by-side in armchairs in a glass-walled nook at the lofty offices of “plucky” distributor A24 on 27th Street on a block of bead wholesalers and ethnic restaurants. The actors are coming to the end of their interviews for Azazel Jacobs’ The Lovers, a chamber-dramedy about middle-class, middle-aged marriage — and the surprising by-products of infidelity — that premiered at the Tribeca Film Festival.

Winger and Letts, who play tippling spouses Mary and Michael, are long-married relaxed in each other’s company. They present an amalgam of opposites: the three-time Oscar nominee (An Officer and a Gentleman) has a reputation for being tense and flighty yet, in person, seems inclined to overshare and probe deeply in the moment; while his relaxed posture and no-fucks-to-give attire give the false impression of openness.

However, together, this combination of Hollywood star and award-winning playwright-actor (August: Osage County) in the home stretch of their movie-marriage as The Lovers opens wider this weekend are a welcome commodity: full-grown adults in the movie industry. The pair — and Winger in particular, perhaps enabled by Letts — demonstrate a willingness to discuss the thorny relationship issues inspired by the movie.

Observer: At the core of The Lovers is a couple whose relationship is both rocked by infidelity – and transformed by it. Americans tend to judge spouses that are unfaithful — did you judge these characters’ choices?

Debra Winger: Every marriage is different. It’s an institution. You made vows and take oaths. But then people change it up, right? And then life happens. So, I think in this case life happened.

Tracy Letts: Every marriage is as individual as the people in them, right? And they all have their own certain contractual terms.

Would you agree that when the couple’s adult son, Joel, arrives for a weekend, he acts as a catalyst for change?

DW: What Tyler Ross’s character Joel brings into the film — that’s an important perspective that Azazel brought. Your allegiances change so many times during this film. We forget that while we’re living our lives and trying to feel vital and enlivened that people will suffer. Everybody gets hurt by something — but that doesn’t mean trauma doesn’t wake everybody up.

TL:  Azazel did a great job in the script and, while making the film, of not standing in judgment of these people. I don’t know if not standing in judgment means that you are complicit. I don’t think it does. We’re all flawed. There’s some acceptance of flaws. They’re human. And I think that’s one of the film’s strengths. Nobody’s shaming anybody. It’s not a shaming story.

DW: You really see everybody’s motivating force is to feel their lives in a vital way. It’s a lie to say that we can do that easily. Anybody that thinks that you don’t have to suffer a little to wake up hasn’t really experienced it. I agree with Tracy — the first time ever! I agree with Tracy about the movie being nonjudgmental. And I think, in fact, the only thing that makes you complicit is silence. And by Azazel making a film about this experience, it’s the opposite of silence. He’s lighting up each aspect of the experience, illuminating everybody’s perspective.

And their son Joel is critical of his parents, right?

DW: Well, he’s hurt. He takes it personally. He can’t see his parents as human beings, which often at that age you can’t. You come out of it eventually, but at nineteen or eighteen, your parents are there to serve you, right?

And you have three sons, right, from ages twenty….

So do you speak from experience?

DW: Yeah. Well, my kids got over it a little bit earlier. But if you think about Joel’s childhood, the implication is that this is not the first time or this is not recent. Joel has been hurt from an age when that hurt is very hard to heal simply. So, had it just happened when he goes off to college that would be different, but it happened when he was little it seems from the way he rails [against his parents].

TL: It’s in your twenties, right, that you start to realize that your parents are people.

DW: That’s when you start to root for them. If they’ve done it right, you start to root for your parents at about twenty. Like get a life. But you don’t want to feel responsible for their happiness and their sadness. And you don’t want to feel like the policeman in their house. I have a great time with my kids now. It’s just you go through adolescence. It’s not always fun.

What questions do you have for each other at this point?

TL: Oh God. I think Debra and I have explored all of that and then some.

DW: I’m just afraid that he never wants to work with me again…

DW: …because he knows every little thing about me. It speaks to the film that the conversations are about things that, you know, you wouldn’t want to talk about perhaps without some literature thrown in, a few brochures.

TL: It’s been a very open discussion. We’ve just put it all out there on the table. It’s not like I’m holding onto the, oh, this is the opportunity to ask Debra that burning question now…

DW: No, we just have a really deep trust. It’s synonymous with that sort of aspect of life I’m talking about, which is a feeling that lights you up. You know that people call falling in love. When we’re younger and we feel that spark, we jump into bed. Well, not all of us. But you pursue it as a romantic endeavor. But I think you learn that you can have these feelings about little kids, older people and people of the same sex. And you start to understand the beauty of that spark. So, I definitely felt that when I met Tracy like, oh, I trust this dude.

Can you elaborate on your marriage in the movie?

DW: There’s a line in The Lovers that I love. All the lines I love are Tracy’s. He’s talking to Jessica Sula, who played Joel’s girlfriend Erin. She asks him about their past, about my character and he says ‘yeah, and I guess I sold her a bill of goods.’ And it’s kind of self‑effacing and there’s so much in it because we all sell each other a bill of goods, including ourselves, when we’re young. We have aspirations and dreams. And I don’t think Mary would look at it that way. I think if he said that in front of Mary, she would correct him. Life happens and it takes you down a road you couldn’t have imagined. We all start out at a point with hopes and dreams. And there is something about American life and institutions: marriage, a home, a mortgage, a business, kids and schools. All these things are like those little fishing weights. They start to draw you down. And women I think are just, or shall I say the feminine spirit because I think men also possess it. Women are more willing to take a scissors and go I’m just going to cut that one. I might cut that. I think it’s because of biological imperative. We get this really huge glimpse of mortality at about forty‑five that goes oh, I’m not going to be here forever. And men maybe are a little slower to come to that. So, I think that we do things inside of a marriage in a way save ourselves. And if the other person is ready, let’s go together.

Tracy, what line of Mary’s rings true for your character?

TL: I can’t think of any lines of Mary’s.

DW: You weren’t even listening, were you? You say acting is all about listening but you weren’t really…

TL:  I can’t tell you a line I say in the film either.

DW: I can quote the entire script – And now [her voice jokingly deep] I will begin.

Tracy, what resonated for you regarding the film’s relationships?

DW: We all have our stuff. I think that moment where you’re sitting on the chair, it’s like here we are. When I say, which was one of the few improvisations, but it’s something that I also say in life and it just came out after Joel sort of destroys and leaves. And, as I often do, I look to my husband Arliss Howard, but in this case I look to Tracy and say “Do something.” And he just says, “But he’s right.”

DW: I do think that’s true. You reached it sooner than I did and you’re younger than me and I’m still struggling with that sort of feeling. I’ve — as you often say, you know, nothing matters. No one’s listening and no one cares. And one day, I told on him. I told Arliss that he said that and it’s driving me crazy.

TL: Everything matters to her. She’s listening to everything.

DW: We’re polar opposites in that, but we end up in exactly the same place, which is that we’re all going be dust. You know, we’re going be like the paper version of the Observer. Pink and dust. Pink dust. 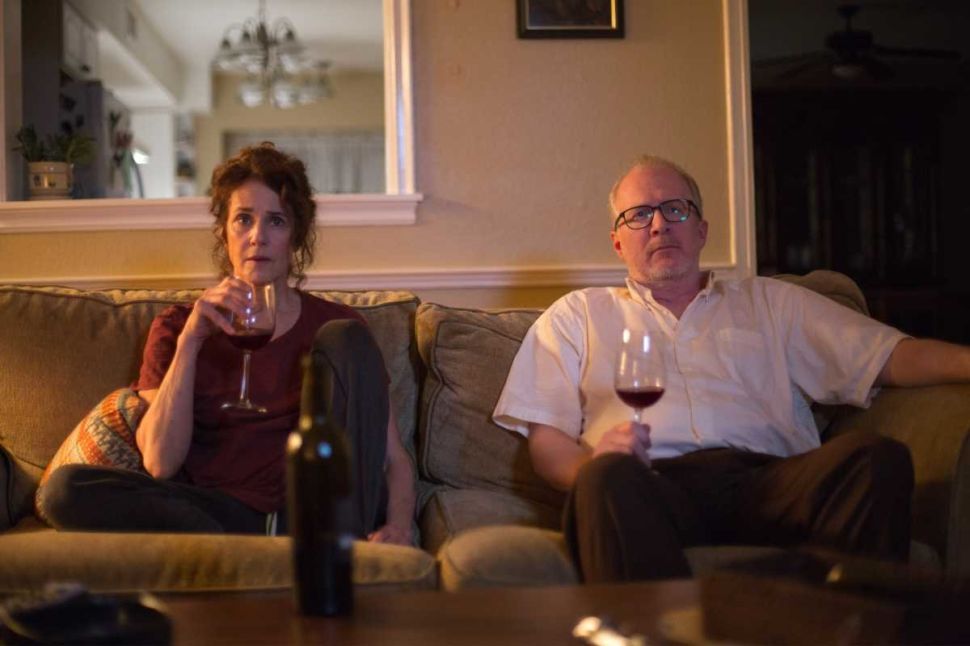